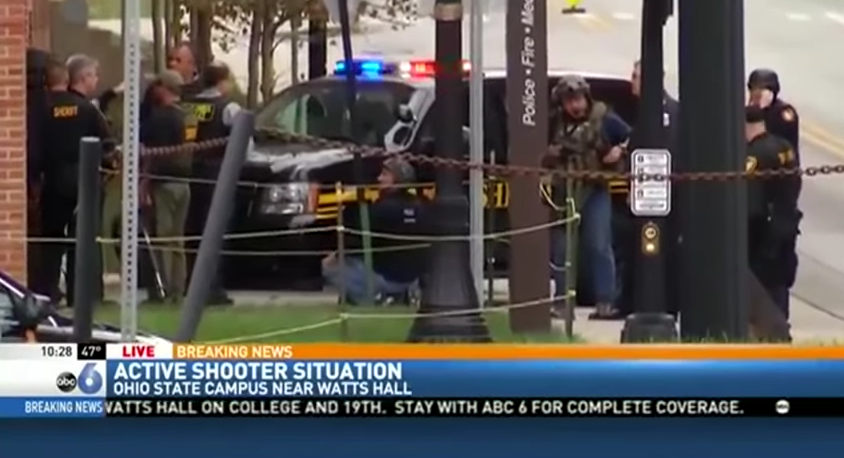 COLUMBUS, Ohio (KDKA/AP) — At least 8 people have reportedly been injured in a mass shooting at Ohio State University.

Seven of those patients were reportedly stable, at least one of them critical.

Law enforcement says one suspect has been shot and is dead and that they were possibly looking for a second suspect.

At 11:30 a.m. Ohio State police tweeted that the shelter in place has been lifted and all classes have been cancelled for the remainder of the day. Police say the area around 19th and College Ave. is closed.

UPDATE 1/2 : Shelter in Place lifted. Scene is now secure. ALL classes are canceled on Columbus campus for the remainder of the day. — OSU Police (@OSUPOLICE) November 28, 2016

FBI and ATF agents are also reportedly on the scene helping in the investigation.

Police tell WBNS that the incident started around 9:30 a.m. this morning when a vehicle ran into the chemical engineering building. Witnesses said two people jumped out of the vehicle, one with a gun, the other with a knife.

Active shooter situation on OSU campus. A professor family friend of mine has been stabbed. 1 person dead. Prayers to the families.

Some students on campus report that there could possibly be a second shooter, but police have not confirmed that.

PSA : EVERYONE BE CAREFUL AT OSU !!! Stay inside and be safe ❤️ pic.twitter.com/md0em2xw4n — Kaitlyn Arquette (@KaitlynArquette) November 28, 2016

A live feed from WBNS-TV showed police leading two people away in handcuffs from a parking garage. There is no word yet as to who the people were or why they were handcuffed.

A tweet went out alerting students of the situation.

The tweet says: “Buckeye Alert: Active Shooter on campus. Run Hide Fight. Watts Hall. 19th and College.” Watts Hall is a materials science and engineering building. “Run, hide, fight” is standard protocol for active shooter situations. It means: Run, evacuate if possible; Hide, get silently out of view; or Fight, as a last resort, take action to disrupt or incapacitate the shooter if your life is in imminent danger.

Barricaded in room on OSU campus 17th with 4 other girls. Staying safe and hope others are also. @10TV pic.twitter.com/Q17mN2Taxn

I’m safe in a barricaded room. If you’re on campus, get in a room and stay safe. pic.twitter.com/Gaw7gjTx6w

This is a developing story.

Keep refreshing your page for the latest updates.

(TM and © Copyright 2016 CBS Radio Inc. and its relevant subsidiaries. CBS RADIO and EYE Logo TM and Copyright 2016 CBS Broadcasting Inc. Used under license. All Rights Reserved. This material may not be published, broadcast, rewritten, or redistributed. The Associated Press contributed to this report.)