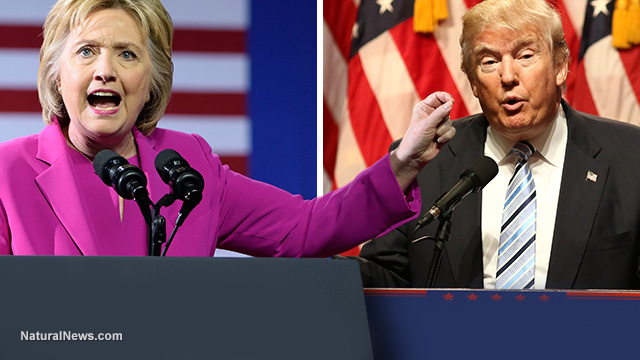 The first Presidential debate of 2016 is over, and America has breathed a sigh of relief that both candidates are still alive and nothing nefarious happened to either one (so far).
The upshot of the debate is that Hillary Clinton was clearly very practiced in delivering an endless stream of lies and had rehearsed a multitude of personal attacks against Trump to generate media-friendly sound bites for mass consumption. Donald Trump, on the other hand, was not polished or rehearsed by a long shot. Although genuine, his responses sounded disorganized, and he missed several opportunities to really hammer back at Hillary Clinton over issues like Benghazi or her lack of email server security.On the positive side for Trump, he never resorted to personal smear attacks against Hillary, even while she unleashed an entire barrage of nefarious, malicious (and of course blatantly false) accusations against Trump. Sporting a fake, arrogant smirk throughout the entire debate, Hillary Clinton came across as a “stab you in the back while I’m smiling” kind of psychopath, or perhaps a condescending school teacher demanding you shut up and listen to her teach you a lesson. Nothing about Hillary Clinton appeared authentic. It was all a rather obvious theatrical performance put on to fool people who have short memories or who don’t track the massive failures of Big Government.While Hillary tended to focus on personal attacks, Trump spent more time talking actual numbers and real-world policies… often in a “connect the dots” way that no doubt lost many viewers who don’t track the details of such topics. Frustratingly, Trump was often talking way over the heads of the audience, even while Hillary Clinton had dumbed her delivery down to the 7-second sound bites preferred by the liberal media (which will use them to disparage Trump).Trump’s discussion, for example, of the Barack Obama $1.7 billion money laundering ransom deal with Iran was difficult to follow. Trump was right about his points, but he didn’t make it clear enough for most people to understand. Although his facts were correct, his delivery wasn’t sound bite friendly.

He also fumbled a huge opportunity to hammer Clinton about her failed email server security. When Holt asked the nominees what they would do to protect America from cyber attacks, Trump should have answered right out of the gate: “How can Hillary expect to protect an entire nation from cyber terror when she can’t even protect her own email server?”

The incredible bias of the leftist media was also on display tonight, as NBC News anchor Lester Holt launched the debate with shameless economic propaganda, claiming the economy was awesome after “six years of job growth” and huge economic gains. With loaded questions like that, it’s hard for anyone to participate in a debate with any sense that fairness will be respected.

Holt also “fact checked” Donald Trump many times, meaning he thrust his own biased opinions into the debate while calling them “facts.” This, on top of the Hillary Clinton smears against Trump, meant that Donald found himself in familiar territory: attacked by the media and Hillary Clinton all at the same time. In effect Lester Holt and Hillary Clinton tag-teamed Trump in an obviously scripted, rehearsed effort to eliminate him from the race once and for all.

Again and again, Holt asked Trump tough questions that were straight from the Clinton campaign’s talking points, and which were obvious set-ups for Clinton to attack (and for fact-checkers to pounce on whatever Trump asserted in his own defense).

Bottom line: Hillary Clinton is a far better liar than Donald Trump… but is that leadership?

If you’re looking for a scripted, robotic, well-rehearsed liar for president, vote for Hillary Clinton. Tonight, she proved that she can lie better than almost anyone else… all while smirking and even managing to stand on her own two feet for a full 90 minutes without suffering seizures or coughing spells.

If you’re looking for someone who genuinely cares about America — but isn’t a polished, rehearsed liar — then Donald Trump is your choice. Of course all the questions directed at Trump are loaded questions launched by biased liberal operatives posing as journalists. Of course Hillary Clinton was given all the questions in advance so she could practice her attack dog answers to perfection. Of course the game is rigged against Trump… would you expect anything else? These deceptive tactics are designed to make Trump look confused and less than organized. We have to give him some credit for the unlevel playing field that’s engineered to make sure he loses.

Assessment of the upshot of all this

By my assessment, Donald Trump is going to lose 5-6 points in the polls due to the appearance of a poor performance in this debate… an appearance that was set up “gotcha” style by Lester Holt and Hillary Clinton obviously working as a defamation tag team (with everything pre-planned, of course).

If Trump doesn’t practice providing answers with more clarity, he’s going to have a difficult time in the next two debates. He also needs to spend less time being defensive and more time going on the attack. The best moments of the debate were when he attacked the failures of the Obama / Clinton regime, which has left America with $20 trillion in debt, 4,000 shooting murders in Chicago in 7 1/2 years, and race wars breaking out in city after city across America.

Because Trump is likely to lose some measure of support in the polls due to this rigged debate, I now estimate that the risk of a false flag attack before the election is similarly reduced. If the corrupt establishment believes they can get Clinton into the White House with the appearance of a democratic vote (even if it’s rigged), they won’t need to set off a false flag attack to delay the election. That scenario is only necessary if Trump looks certain to win.

Keep in mind that if Hillary Clinton wins this election, it’s really over for America. It’s DEATH under Clinton, and LIFE under Trump.