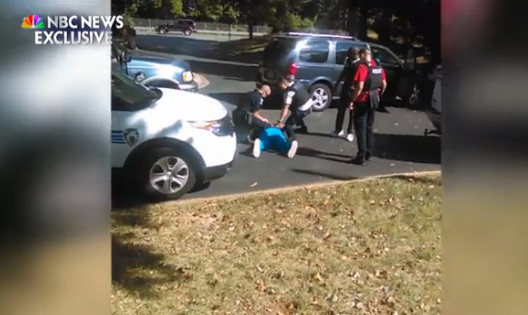 The video, taken by Scott’s wife, does not clearly show the exact moment he was shot by police on Tuesday. Scott is seen on the ground surrounded by police officers moments after the shots were fired.

The killing of Scott, 43, sparked three nights of fiery protests and violent clashes between protesters and law enforcement. Activists and the Scott family have pressed city officials to release bodycam or dashcam footage of the fatal encounter.

In the two-minute, 12-second footage provided by the Scott family’s attorney to NBC News, Rakeyia Scott can be heard saying, “Don’t shoot him, don’t shoot him” as police appear to converge on a white pick-up truck in the parking lot of a condominium complex. “He has no weapon — don’t shoot him!”

“Keith, don’t let them break the windows! Come on out of the car,” she can be heard yelling, “Keith, don’t do it!”

In the aftermath, police officers can be seen attending to Scott’s prone body as his wife apparently calls 9-1-1. No gun is clearly visible in the footage, which appears to have been recorded from a nearby patch of grass.

The footage was obtained by NBC News amid conflicting reports about whether a gun was found at the scene of the shooting. Police say he had a handgun on him and posed “an imminent, deadly threat.” The family says he was not armed and did not pose a threat to the officers.

A photo, previously obtained by NBC News from local affiliate WCNC, appears to show a gun at the scene.

Here’s what we know about the shooting:

Police arrived at The Village at College Downs complex near the University of North Carolina at Charlotte to search for someone else with an outstanding warrant. Officers said they saw Scott holding a handgun as he exited his car and returned to his vehicle. He then exited again as officers approached him and became threatening, police said.

Charlotte-Mecklenburg Police Chief Kerr Putney said three officers at the scene were wearing bodycams, although the officer who fired the fatal shot was not.

Protesters have demanded that police release their videos, but Putney has refused, saying that he didn’t want to jeopardize the investigation. The State Bureau of Investigation is leading a review into the shooting.

Putney said Thursday that the videos he has seen don’t show “absolute, definitive, visual evidence” that Scott pointed a gun at the officers.

Justin Bamberg, an attorney for the Scott family who also watched the police videos, said they fail to prove that he was armed. Scott can be seen in the video calmly walking back after he was approached by police, according to Bamberg.

“It is impossible to discern from the videos what, if anything, Mr. Scott is holding in his hands,” he said in a statement.

CMPD Officer Brentley Vinson, who like Scott is African-American, has been placed on paid administrative leave, as is standard procedure.

Bamberg said Thursday that the family wants the police videos made public.

“It was incredibly difficult for members of the Scott family to view these videos, but as a matter of the greater good and transparency, the Scott family asks that the Charlotte-Mecklenburg Police Department publicly immediately release both of the videos they watched today,” Bamberg said.

Charlotte Mayor Jennifer Roberts said Friday that she watched some of the police footage and does want it released, but the ongoing investigation must be taken into consideration.

“The question is on the timing,” she said