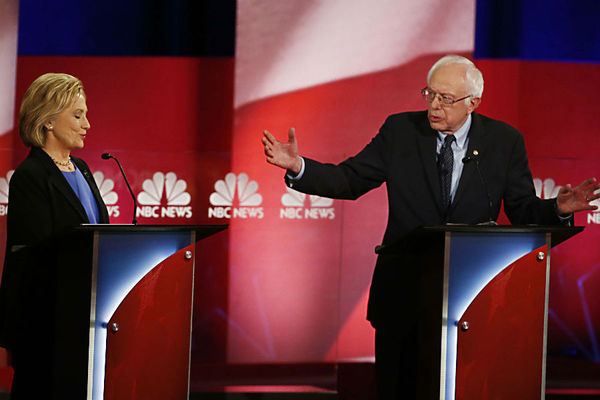 Has Sen. Bernie Sanders of Vermont so endangered rival Hillary Clinton’s chances of becoming the Democratic Party’s presidential nominee this time around that her campaign is using wannabe mercenaries to shut him up and make him back off?

At this point that isn’t known, but what is apparent is that the violence between Sanders and Clinton loyalists is ramping up.

As reported by Breitbart News, the battle that began recently during Nevada’s Democratic Convention entered another dimension a few days later as a war of press releases, phone calls and tweets from a variety of people and groups on the Left began in earnest.

Most shocking among them: A statement from Sanders himself revealing that someone had fired gunshots into his Nevada campaign offices.

Now, it is known, as Republicans begin to coalesce around their party’s frontrunner, Donald Trump, Democrats are tearing themselves apart choosing between an avowed socialist who would turn the United States into a giant Venezuela and a deeply flawed candidate whom many believe is an unindicted (to this point) criminal.

On a recent morning, Senate Minority Leader Harry Reid – a Nevada Democrat – spoke with Sanders for 10 minutes via phone to recap what happened in his state.

“He and I had a very long conversation,” Reid said about the call. “He said that he condemns that. I’m confident he does. I’m confident he’ll be saying something about it soon… I’m hopeful and very confident that Sen. Sanders will do the right thing,” he added.

After talking with Reid, Sanders’ campaign released a statement about what happened in Nevada. That said, the statement likely wasn’t what Reid was looking or hoping for: It revealed the shooting incident and more about the infighting in Nevada, including a break-in months ago at his campaign staff’s living quarters.

“Within the last few days there have been a number of criticisms made against my campaign organization,” Sanders said. “Party leaders in Nevada, for example, claim that the Sanders campaign has a ‘penchant for violence.’ That is nonsense,” the Senator continued.

(Remember when his naysayers began saying that about Trump’s campaign?)

Sanders went on to add, “when we speak of violence, I should add here that months ago, during the Nevada campaign, shots were fired into my campaign office in Nevada and apartment housing complex my campaign staff lived in was broken into and ransacked.”

As the statement continued, Sanders explained in detail his argument against what went on in Nevada, which eventually had to be broken up by police, by the way.

“The chair of the convention announced that the convention rules passed on voice vote, when the vote was a clear no-vote. At the very least, the Chair should have allowed for a headcount,” the Weekly Standard reported.

“The chair allowed its Credentials Committee to en mass rule that 64 delegates were ineligible without offering an opportunity for 58 of them to be heard. That decision enabled the Clinton campaign to end up with a 30-vote majority,” he wrote.

However, the chair would not acknowledge any motions that came from the floor, let alone allow any votes on them. These claims were then followed up by a Sanders bombshell: He said the Democratic Party “has a choice: It can open its doors and welcome into the party” his supporters or “maintain its status quo.”

“At (the Nevada) convention, the Democratic leadership used its power to prevent a fair and transparent process from taking place,” Sanders said, adding that there have been “zero reports” of violence during his rallies across the country.

So divided is the party becoming that even Left-wing media outlets like MSNBC are calling on the leader of the Democratic National Committee, Debbie Wasserman Schultz, to step aside.

“This has been very poorly handled from the start. It has been unfair and they haven’t taken him seriously, and it starts quite frankly with the person we just heard speaking. It just does. You know that,” Morning Joe co-host Mika Brzezinski said after an interview with Wasserman Schultz.