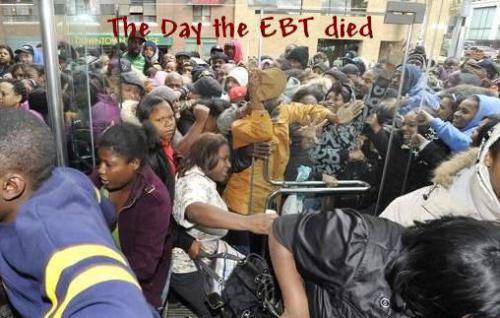 Civil uprising caused by the permanent, or even temporary, suspension of government-issued food stamps, also known as Electronic Benefits Transfers (EBTs), is considered to be one of the greatest threats to today’s society.

The number of government food stamp recipients has significantly swelled in recent times, with one in five children receiving the benefits as of 2014, according to the US Census Bureau.

Numbers from October 2014 show that there were 46,674,364 Americans on food stamps. “Food stamp recipients have exceeded 46 million since September 2011,” reports CNSNews.com.

That means if the government were to suspend EBT cards under a government shutdown, 46 million Americans may not have access to food. Panic would surely ensue, along with rioting, looting and severe street violence, as was seen when Hurricane Katrina hit New Orleans in 2005.

While EBT cards were not suspended during the 2013 government shutdown, that doesn’t mean they’re not at risk of being cut in the future.

A letter dated October 11, 2013 by the US Department of Agriculture (USDA) and addressed to states participating in the SNAP program, directed states “to hold their November issuance files and delay transmission to State electronic benefit transfer (EBT) vendors until further notice.” 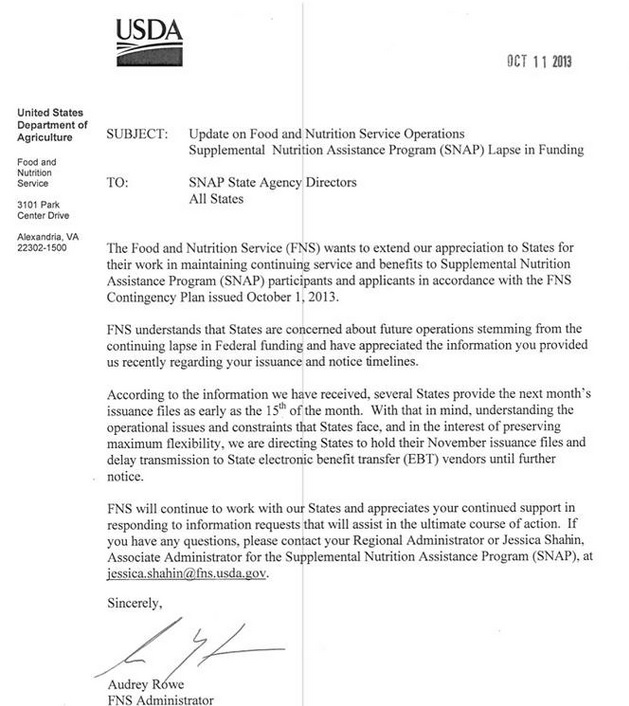 While the mainstream media will have you believe that EBTs are not at risk of being suspended, the above USDA letter proves otherwise.

“If Congress does not act to avert a lapse in appropriations, then USDA will not have the funding necessary for SNAP benefits in October and will be forced to stop providing benefits within the first several days of October,” Catherine Cochran, a spokeswoman for the USDA, told US News and World Report.

“Once that occurs, families won’t be able to use these benefits at grocery stores to buy the food their families need.”

US News and World Report said the USDA “declined to give details on why the automatic funding would not continue.

“Democratic lawmakers briefed by the department said USDA does not have enough money in reserve to pay a full month’s benefits and a partial government shutdown would affect recipients in states that pay out their benefits at the first of the month. They said the department had extra dollars two years ago but that this time around it does not have enough additional reserves.”

While many experts were predicting a 75 percent chance that the government would shut down over the Democrats’ refusal to cut funding to Planned Parenthood, at the last minute, it “averted a shutdown by approving a temporary spending measure to keep federal agencies operating through Dec. 11,” according to reports.

“The temporary spending measure will keep the government operating at roughly last year’s levels — a rate of about $1.017 trillion a year, with some notable changes for emergency situations, such as $700 million to fight wildfires in the West.”

Democrats shut down government four times over abortion funding since 1977

Four out of 18 government shut downs since 1977 have been a result of the debate over abortion, according to Conservative Review.

Despite the fact that Planned Parenthood was exposed by the non-profit Medical Progress for trafficking aborted baby parts across state lines, the Democrats remain steadfast in their position to continue funding Planned Parenthood.

Furthermore, Obama made it clear he would only sign funding for a bill that did not de-fund Planned Parenthood, LifeNews.com reports.