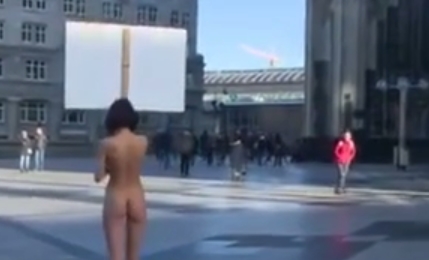 This morning (January 8), a completely naked young woman named Milo Moire stood in near-freezing temperature outside Germany’s famous Cologne Cathedral Square, holding a sign that says “Respect us! We are no fair game, even when we are naked!!!” Curious onlookers, including several police officers, stood watching nearby.

She was protesting the recent surge in sexual assaults and thefts that occurred in Cathedral Square on New Year’s Eve, leading to the investigation of 31 suspects, including 18 immigrants currently seeking asylum in that country. “I am firmly convinced that women will no longer be treated as sex objects when a naked woman is treated with as much respect as a clothed one,” said Ms. Moire.[1]

As the Economist explains, “Topless protests are intended to ridicule (mostly) male voyeurism. By stripping, Femen says, women expose their vulnerability but also use their naked bodies as weapons. Its grand aim is to give new meaning to the nude female, as a political tool instead of a sex object.”[2]

The nude protest was pioneered over a hundred years ago by the Dukhobors, a Christian pacifist sect that demonstrated their rejection of materialism by publicly burning their own money and possessions and parading around naked in public, on the grounds that human skin was Godly and clothing was not. 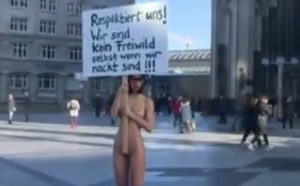 As for the current trend of feminine nude protesting, some critics aren’t buying it, arguing that the audience too often sees only the bare breasts and misses the message. As one critic summarizes:

“When media swarms semi-nude protests, women are not taking back their bodies. They are being objectified. They are supporting the very system they are trying to fight against, because nudity shocks. Nudity will sell papers, and get hits on online sites and draw the interest of people who might never think feminism is the right path for them. Will this change as these protests become more commonplace? Maybe. But it is important to balance shock-protests with real, informative seminars and other educational materials to ensure that the message is passed along. If the group is best-known as a bunch of naked feminists, they will be afforded less respect and therefore hold less sway than a group which takes a more educational approach.”[3]