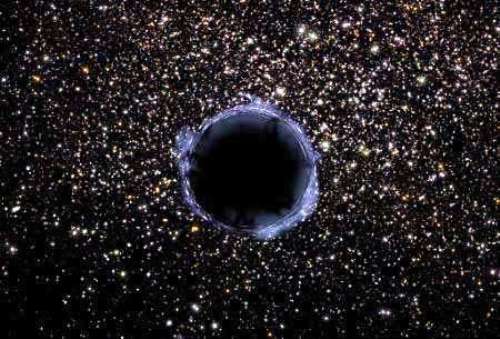 What happens when two galaxies that contain supermassive black holes come crashing together? Research indicates that the tremendous energies of the collision might shove the resulting celestial body away from the center of its newly merged home galaxy. The recently formed black hole might even end up cast out of the system.

Black holes are invisible to direct observation since they swallow all light. However, their gravitational effects on their neighbors make it possible to locate them and approximate their size and mass.

A supermassive black hole is the biggest of its kind. The typical example has around 100 times the mass of the sun.

When two such massive bodies merge, they are expected to generate plenty of gravitational waves. The European Space Agency (ESA) hopes to detect those waves with its upcoming Laser Interferometer Space Antenna (LISA) spacecraft.

To support LISA’s operations, Rochester Institute of Technology (RIT) researcher Yashashree Jadhav sorted through the data of a hundred galaxies observed by the Hubble Space Telescope. She looked for supermassive black holes that lay offset from the center of their home systems. (Related: Experts just found 83 MASSIVE black holes at the edge of the universe.)

When galaxies collide and merge, so do their supermassive black holes

Many galaxies have crashed into, consumed, or combined with at least one other similar system during their existence. Even the Milky Way will collide and merge with the Andromeda Galaxy in the distant future.

The merger is not always a smooth one. New stars may form from the ensuing collision of dust and gas.

If both galaxies contain supermassive black holes at their centers, the black holes may also end up merging. However, their combination will result in much more energetic reactions than just creating stars.

In addition to gravitational waves, the merging pair of supermassive black holes may also experience a massive backlash akin to the recoil of a gun. The force of this “recoil” may shove the newly combined black hole out of the center of the merged galaxy.

Jadhav reported that the newly merged supermassive black hole might start moving at speeds ranging from several hundred to thousands of miles per second. The velocity depends on the starting mass of the original pair of black holes.

Researchers will have to keep that in mind when they follow the gravitational waves produced by a merged supermassive black hole. They must look to the side of the galactic center to find the off-center source.

Further, a powerful backlash might eject the new supermassive black hole out of the merged galaxy. This supposedly rare event would happen if one of the merging black holes considerably dwarfed its partner.

Even if the “recoil” didn’t expel the supermassive black hole, it might push the object hundreds of light-years from the galactic center. It would take around a billion years before gravitational forces returned the partially displaced black hole to the center of the galaxy.

Jadhav started her evaluation of each supermassive black hole by estimating the galactic center. She compared multiple Hubble photographs of a galaxy, calculated the amount of light produced by all of its stars, and used that data to judge the center of mass of the system.

Next, she looked at near-infrared photos of that galaxy to find the locations of the supermassive black hole there. She then compared the position of the black hole to the galactic center.

The RIT team reported that 20 percent of the supermassive black holes in their study lay off-center of their home galaxy. These enormous black holes might have gotten dislodged by the galactic collision that created them.