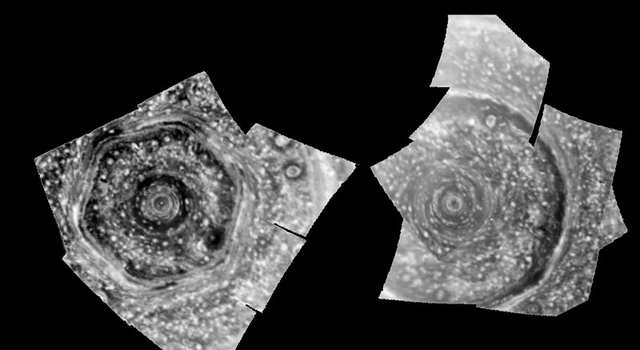 As Earth enters its winter season, the northern pole of Saturn is preparing for summer. The gas giant signaled this by revealing a hexagonal vortex of increasingly hot air at the upper reaches of its skies. An article in Science Daily compared this new feature to an earlier and similar weather formation located on the opposite pole of the ringed giant.

Both hexagonal formations were discovered by the Cassini mission. The space probe spotted the one in the southern pole of Saturn right after its arrival in 2004.

During that time, the south pole was going through summer while its northern counterpart underwent the exact opposite season. The upper region of the warmer pole also sported a hexagonal storm while the wintry one was not marred by any such vortex.

By 2018, the situation had reversed itself. Saturn’s southern pole was now experiencing colder temperatures even as the northern pole started heating up.

Now the north pole is showing signs of developing a similar hexagon-shaped vortex. Researchers believe that this and the earlier hexagon are so huge that they can affect the weather on the other hemisphere of Saturn. They even believe the separate storms could be opposite ends of the exact same super storm. (Related: Space probe records Saturn “singing” to its weirdest moon.)

The University of Leicester (UL) headed a new study on Saturn’s curious weather pattern. They found that the new northern vortex has the exact same hexagonal shape as the existing one in the southern pole.

They drew a pair of theories from this. The first is that these two storms, found at different altitudes of opposite halves of Saturn, are unrelated and separate weather formations that just so happen to assume the same shape.

The other theory is that the hexagons are opposite ends of a single weather structure that could be hundreds of kilometers tall. Both vortexes are found in the cloud level of Saturn, which happens to contain most of its weather activity.

Cassini detected the vortexes with its infrared spectrometer. However, the winter season in the northern pole prevented the space probe from investigating the stratosphere there until recently.

Winters on Saturn are too cold for Cassini’s infrared sensor to penetrate. The seasons also last for much longer than their Earth equivalents.

The northern pole only started to shed winter in 2009. It took until 2014 for it to get warm enough for Cassini to see deeper into its atmosphere.

Researchers found that the northern hexagon quickly got warmer as the air in the pole began moving downwards. Certain gases also began to appear in higher concentrations. These developments made it easier for Cassini to study the vortex.

Their findings suggest that the two poles of Saturn act very differently from each other. The vortexes are also distinct from each other despite their similar appearance. The newly-emerged one in the north is younger, cooler, and follows different dynamics than the one in the south.

Proponents of the two-vortex theory think that the separate storms are caused by asymmetrically-arranged poles. They do not think the vortexes are part of the same weather structure because the winds between them are constantly changing.

The single-vortex group countered that hexagonal waves should not be able to spread upwards. Yet the new vortex is doing exactly that. Therefore, it could be possible that the vortexes are interlinked.

Cassini’s mission ended in 2017. It will be many years before the next space probe reaches Saturn to find out more about its hexagonal storms.

Discover new things about the weather on our Solar System’s second biggest planet at Cosmic.news.