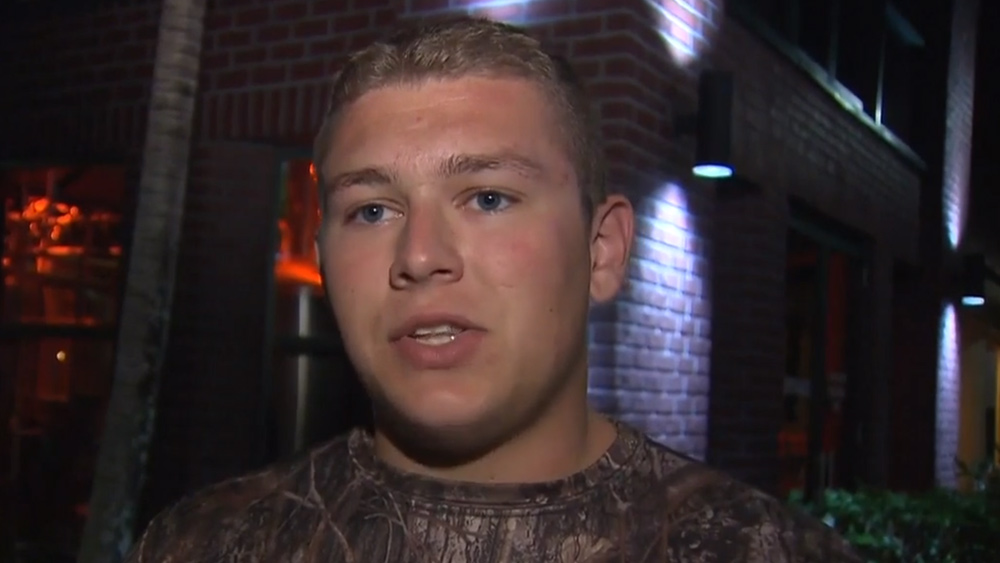 Yesterday, CNN staged a fake, scripted “town hall” on the Florida shooting, and to no one’s surprise, the entire event was scripted as “elaborate media theater” to push the Left’s radical gun control agenda.

“Marjory Stoneman Douglas High School student Colton Haab said he was approached by CNN to ask a question at Wednesday night’s town hall but decided not to after the network gave him a ‘scripted question,’ quashing one he wrote himself,” reports Real Clear Politics. “Haab, a member of the Junior ROTC shielded students while the school was under attack from the shooter, said he was going to ask about using veterans as armed security guards.”

“CNN had originally asked me to write a speech and questions — and it ended up being all scripted,” Haab said to a local reporter. “Though Parkland student Colton Haab is being recognized nationally as a hero, CNN opted to leave him out of Wednesday’s town-hall event on Wednesday evening — seemingly because his perspective does not fit the narrative they have been peddling,” reports The Gateway Pundit.

CNN has a long history of scripted questions, audience plants and fake news

CNN is, of course, the same discredited fake news network that routinely uses “plants” in the audience and secretly gives debate questions to Democrat candidates in advance of the debates. CNN has previously been caught staging “focus groups” to make sure participants are nearly 100% pro-Clinton, and Hillary Clinton — the darling of CNN — has been repeatedly caught using child actors to plant scripted questions.

“CNN has a long history of allowing political plants to flourish in its public forums,” warns Michelle Malkin in the New York Post:

At the cable station’s Democratic debate in Las Vegas in 2007, moderator Wolf Blitzer introduced several citizen questioners as “ordinary people, undecided voters.” But they later turned out to include a former Arkansas Democratic director of political affairs, the president of the Islamic Society of Nevada, and a far-left anti-war activist who’d been quoted in newspapers lambasting Harry Reid for his failure to pull out of Iraq.

CNN’s fake news is a REAL danger to us all

Despite the fact that CNN’s “news” is 100% scripted, staged and fake, it also poses a very real danger to society. Thanks to CNN’s programming of the gullible masses, left-wing lunatics are being successfully whipped into a mindless, deranged frenzy of hatred toward responsible, law-abiding gun owners.

CNN’s so-called “town hall” event was nothing but a “bullying show trial,” according to multiple media sources. “Tapper is being singled out for much of the criticism from those who say he remained silent as abusive personal attacks were hurled at Sen. Marco Rubio (R-FL) and NRA spokesperson Dana Loesch. Incredibly, Tapper also remained silent as his audience booed a rape victim,” reports Breitbart News:

At the Wednesday night spectacle, those in favor of protecting our Second Amendment civil rights were vastly outnumbered by an audience packed with hostile gun-haters and emotional questioners, including children. According to various reports, the anti-gun participants were given scripted questions crafted by CNN… Throughout the hour, the audience heckled, howled, and poured derision on Loesch and Rubio. Other than admonishing his audience for calling Loesch a “murderer,” Tapper stood by in silent approval as abuse and personal attacks rained down on his outnumbered guests.

“I want to make this super obvious point,” Loesch said. “The government has proven that they cannot keep you safe. And yet, some people want all of us to disarm. You heard that town hall last night. They cheered the confiscation of firearms. And it was over 5,000 people.”

“I had to have a security detail to get out,” she said of the Sunland, Fla. event. “I wouldn’t be able to exit that if I didn’t have a private security detail. There were people rushing the stage and screaming burn her. And I came there to talk solutions and I still am going to continue that conversation on solutions as the NRA has been doing since before I was alive.”

Loesch said the people who call Trump a tyrant are the same people who want the president to confiscate weapons.

“The government can’t keep you safe and some people want us to give up our firearms and rely solely upon the protection of the same government that’s already failed us numerous times to keep us safe. And then they also call Trump a tyrant but they say they want the president to also confiscate our firearms? Try to figure that one out,” Loesch said.

To repeat, the anti-gun Left has been brainwashed with so much seething anger and rage, that a deranged liberal mob literally rushed the stage, screaming “BURN HER!”

CNN is not just FAKE news, but staged, theatrical mind control programming of the masses

As you absorb all this, keep in mind how CNN is the same vile, hate-fueled network that stalks elderly women in their own front yards and publicly accuses them of being Russian co-conspirators while “doxxing” them to the whole world. CNN is populated by anti-American, communist-leaning, treasonous journo-terrorists who despise liberty, the Constitution and the truth.

Make no mistake: CNN’s goal is the complete overthrow of the U.S. Republic, the nullification of the Bill of Rights and the silencing of all conservative voices. CNN actively seeks to overthrow the elected President, criminalize all gun owners and demonize Christians, conservatives and patriots. CNN is so deranged and dangerous that the network would no doubt broadcast and cheer mass beheadings of gun owners across America by Antifa terrorists.

CNN is the enemy of America. It might as well be called the “Communist News Network” or worse. What CNN is doing is nothing less than inciting violence against its political enemies. This is all by design.

There’s no question in my mind that once the coming civil war gets unleashed, CNN news offices all across the country will be named a priority for pro-America forces to occupy and control in an effort to halt CNN’s anti-America, violence-inducing propaganda broadcasts that are ripping this country apart. See the related story, “Milo Yiannopoulos tells Alex Jones: The unhinged Left has made civil war in America inevitable.”

To confirm: Yes, I am saying that CNN is the enemy of America. If CNN is allowed to continue broadcasting its malicious fake news, it will destroy this country (which is CNN’s ultimate goal, of course). Today, I call on President Trump to arrest the journo-terrorists at CNN and halt their malicious, anti-America lies that are inciting violence and transforming the Left into a mindless mob of hate-filled lunatics.