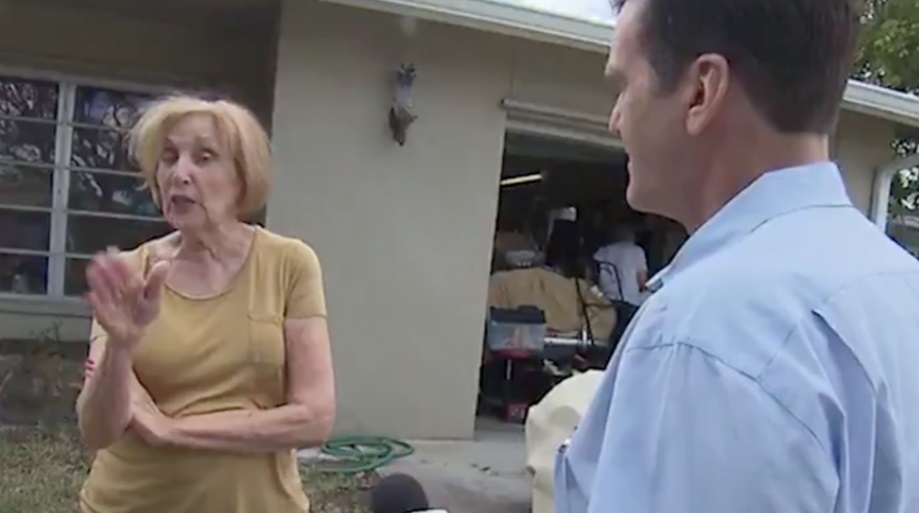 In 2016, I coined the term “journo-terrorism” to describe the fear-based deranged “journalism” being practiced by out-of-control left-wing news propagandists like CNN. Today, CNN just confirmed they are the leader in journo-terrorism by stalking an elderly woman in her own front yard, “doxxing” her on a live broadcast, and accusing her of being a Russian puppet.

The Russia collusion “derangement syndrome” of fake news CNN is spinning so out of control that I’m calling for a criminal investigation of CNN reporter Drew Griffin for harassment and inciting violence against an elderly American.

For the record, it was actually CNN and MSNBC who promoted a Russia-organized event in New York, according to recent Robert Mueller indictments. Yet CNN has no desire to investigate itself for functioning as puppets for Vladimir Putin.

Stop harassing people at their homes, you psychos!

Mark Dice: “Stop harassing people at their homes, you psychos!”

As part of its absurd “news” harassment of this elderly woman, CNN actually broadcast her full name, which is unique enough that people were then able to determine her home address. She also received threats of violence from CNN followers, reports Breitbart:

The woman also received violent threats, with one user warning, “stay in Florida, you come to NY and I’ll kick your Russian bot ass.”

No seriously @CNN — did you consider the possibility that in exposing an old lady supposedly being tricked by Russian trolls on Facebook dot com that you would be sending waves of ***American*** trolls to call her a traitor, attack her appearance, & threaten her with violence? 5/ pic.twitter.com/vNbSMgYVqR

This isn’t the first time CNN has stalked private citizens in acts of journo-terrorism. “In July, the cable news giant hunted down a man who posted a meme on Reddit poking fun at the network,” reports Breitbart. The pressure resulted in the man eventually apologizing to CNN.

But CNN apologize to no one; not for exploiting dead and traumatized children to push its radical anti-gun agenda, nor for stalking and harassing an elderly woman on her own front lawn, accusing her of colluding with the Russians.

Remember, too, that CNN is engaging in all this insane, deranged, lunatic behavior to desperately try to promote a fictional narrative that claims “the Russians” stole the election from Hillary Clinton. To this day, CNN still can’t accept the fact that Hillary was a horrible candidate who remains widely despised by informed, intelligent Americans.

Truly, the utterly fabricated left-wing “Russia collusion” hoax has become a dangerous delusion among left-wing activists (pretending to be journalists). They’re now running around the country, accusing everyone who opposes them of either being a Russian co-conspirator or a Russian bot. Deranged lunatic Adam Schiff — who belongs in a straight jacket — has been desperately pushing “Russian bot” fantasies for weeks, enabled of course by a complicit, clueless media.

Many of us are now coming to the astonishing realization that CNN is at war with reality, and there’s no tactic too low or too far for the journo-terrorism network to invoke. Just yesterday, CNN’s Communist-In-Charge Chris Cuomo falsely claimed that a 20-year-old purchased an AR-15 with an expired ID. In truth, the young man didn’t purchase an AR-15 at all, but walked around a gun store with an expired ID and got a picture of himself holding an AR-15.

From this, CNN’s Cuomo declares the young man “purchased” the AR-15, even though the guy openly says he didn’t purchase it and left the store empty-handed. When confronted over his blatantly false “fact,” Chris Cuomo doubles down on the lie and can’t even recognize actual events that collide with his own internal mental delusions.

Truly, CNN reporters no longer recognize reality at all. Actual events taking place in the real world “do not compute” in the twisted minds of CNN propagandists pretending to be journalists.

Isn’t it time to yank CNN from all the airports across America?

It begs the question: Why on Earth is CNN still being broadcast across U.S. airports? Why hasn’t CNN been banned from Google News for pushing years of fake news rooted in journo-terrorism tactics? Why hasn’t Twitter banned CNN’s account for gross violations of its terms of service (harassing elderly women surely qualifies as a violation, does it not)?

The answer, of course, is that CNN is the leading propaganda front for Trump-hating, anti-American globalist forces that are attempting to dismantle America piece by piece. “No network has shown their leftist leanings more than CNN, which has gone into full blown overdrive in their around the clock anti-gun coverage, with the first 7 articles on their homepage, including their featured story, all attacking the NRA and promoting leftist gun control causes,” writes Alex Thomas for SHTFplan.com.

“…[T]he entire establishment is conducting a massive psychological campaign against the NRA and the tens of millions of gun owners across the United States. This includes the supposedly non-partisan Florida school shooting survivors who have parroted Democratic talking points for the last week.”