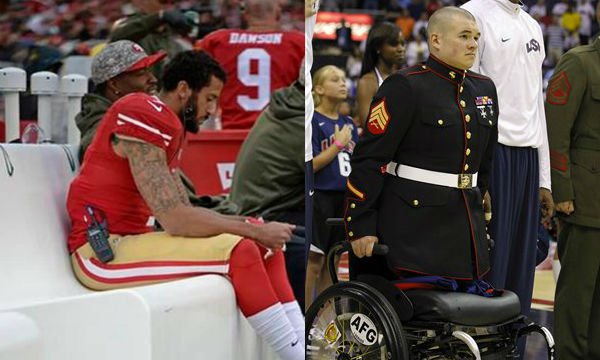 As Americans, it’s important to frequently remind ourselves why we have remained a free country for the past 241 years. It’s not because of some government program, nor is it because of sheer luck either; rather, the United States has remained free because of the brave men and women in uniform who put their lives on the line so that we can continue to live our day-to-day lives in peace. Some of these soldiers have even made the ultimate sacrifice and only return home inside of a flag-covered casket. They deserve our respect, and it’s up to the rest of us to let them know that we are thankful for all that they do; what a shame it is that the National Football League sees things differently.

As Mike Tomlin, coach of the Pittsburgh Steelers, put it just days ago when it was announced that his team would remain in the locker room for the playing of the National Anthem, “We’re not going to play politics. We’re football players, we’re football coaches. We’re not participating in the Anthem today — not to be disrespectful to the Anthem, but to remove ourselves from the circumstance.”

Not going to play politics? How can anyone possibly argue that going along with a nationwide trend and not participating in the National Anthem is anything but playing politics? But the Steelers coach didn’t stop there. “People shouldn’t have to choose,” he said. “If a guy wants to go about his normal business and participate in the anthem, he shouldn’t be forced to choose sides. If a guy feels the need to do something, he shouldn’t be separated from his teammate who chooses not to.”

What’s perhaps most infuriating about the way in which coach Tomlin addressed this issue was how acceptable he made it sound to take a knee during the National Anthem and disrespecting those who have served. Instead of walking the line and trying (but failing) to come across as an open minded individual, the Steelers coach should have said something along the lines of “while I respect everybody’s First Amendment rights to the freedom of expression, I am highly encouraging my team to do the right thing and participate in the playing of the National Anthem.” That is what not only a real coach, but a real American, would have said.

It goes without saying that despite the fact that these football stars think they are heroic revolutionaries whenever they take a knee during the National Anthem, the reality is that they are anything but. It takes absolutely no courage to disrespect your flag and your country, especially when the mainstream media is cheering you on 24/7. In an era where those that are unpatriotic and despise America are celebrated, real courage comes from those who choose to stand up for their country.

President Trump certainly hasn’t been reserved when it comes to his opinions on the Steelers and the NFL in general. On Twitter, Trump wrote, “The NFL has all sorts of rules and regulations. The only way out for them is to set a rule that you can’t kneel during our National Anthem.” While new regulations regarding standing during the National Anthem would certainly be a step in the right direction for the NFL, the chances that such a rule will actually be implemented are extremely slim. In fact, this trend of kneeling during the National Anthem may even expand to high school and college football, and possibly even to different sports. We must look for other solutions.

It appears that the core issue here has less to do with the rules of the NFL and more to do with the fact that too many Americans do not love this country as much as they should. (Related: School students have been warned not to chant “USA” at events because it might offend anti-American liberals.) There is an extreme lack of patriotism, not only within the National Football League but really throughout the entire country. If we want more athletes to stand up for the National Anthem, and if we want more Americans to encourage them to stand, then we need to begin to process of restoring patriotism, love of country, and respect for those who have served.