Uncensored and Independent Media News
Home
Health Freedom
Second Amendment
Prepping
Survival
Censorship
Subscribe
SHOP
Popular Articles
More reason to be a prepper: Aid is arriving by the ton in Puerto Rico, but it’s NOT getting to the people because the logistics chain has been destroyed
09/28/2017 / By JD Heyes / Comments 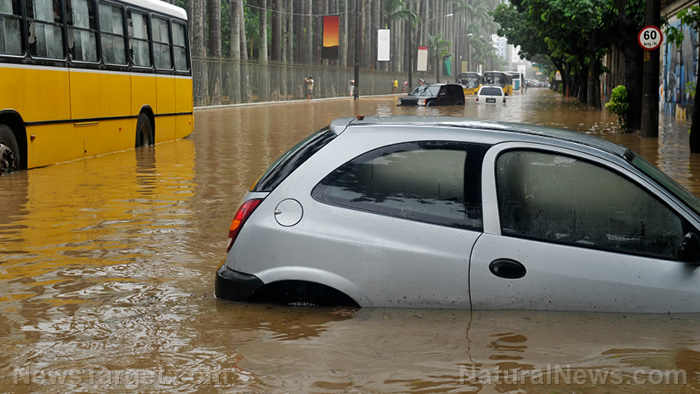 The devastation to Puerto Rico caused by Hurricane Maria more than a week ago continues to provide object lessons in the necessity of becoming a prepper full-time and not just as some passing fad.

You may recall that the storm completely knocked out the island’s entire electrical power grid. Besides that, there has been massive destruction and flooding. What goods remained after the storm blew through are long gone. Aid workers and National Guard troops are working hard to restore basic services, but another problem has cropped up.

Food, fresh water, and basic supplies are arriving by the ton. Thousands of shipping containers brought in by scores of cargo ships are piling up on the docks of Puerto Rico’s main ports, which have been reopening steadily as workers cleared storm debris in Maria’s aftermath.

The problem is that the logistical chain has been destroyed; there’s no way to quickly distribute the tons of food and supplies that are being shipped in, and it’s not clear that food and water will be distributed quickly enough before people start dying.

Thousands of cargo containers bearing millions of emergency meals and other relief supplies have been piling up on San Juan’s docks since Saturday. The mountains of materiel may not reach storm survivors for days.

Like lemmings, mainstream media journalists have been criticizing the Trump administration for its alleged “slow response” to the disaster in Puerto Rico, but clearly, the problem does not lie with the White House. Rather, it’s simple logistics; infrastructure has been demolished and there’s little in place to actually distribute the tons of supplies coming in.

“There are plenty of ships and plenty of cargo to come into the island,” Mark Miller, a spokesman for Crowley Maritime Corp., a Jacksonville, Florida-based firm that operates a dock in the island’s capital of San Juan. “From there, that’s where the supply chain breaks down — getting the goods from the port to the people on the island who need them.” (Related: Hurricane Harvey proves again why it is foolish if you don’t become a prepper.)

Bloomberg noted that distributors for small retailers and the big box stores are currently unloading some 4,000 20-foot shipping containers that are full of necessities — millions of emergency meals, fresh water, soap, and other commodities. And although the Trump administration has taken steps to ease shipping to Puerto Rico, in part by temporarily waiving the Jones Act*, docks are serving as choke points in the ongoing effort to provide relief for storm victims.

Now, there is a race on to get supplies where they are most needed — which is practically the entire island of 3.4 million — before people start dying, officials say. There is still no electricity or phone service throughout most of the island, and it should be noted that the grid was destroyed during Puerto Rico’s hottest season of the year. Worse, the island’s governor, Ricardo Rossello, said recently the grid was already in poor shape and now may not be fully restored for weeks or even months.

Of the island’s 69 hospitals, just 11 have power and fuel for generators. Without quick access to fresh water, health officials are warning that disease is about to become rampant.

Rossello said that 33 hospitals are functioning, there are 11 aid distribution centers operating, and 170 shelters for the homeless. But it’s not enough, not by a long shot.

*Per Bloomberg: “The 1920 Jones Act is a maritime law requiring shipments of goods between two U.S. ports to be made with American-flagged vessels, manned by American crews.”