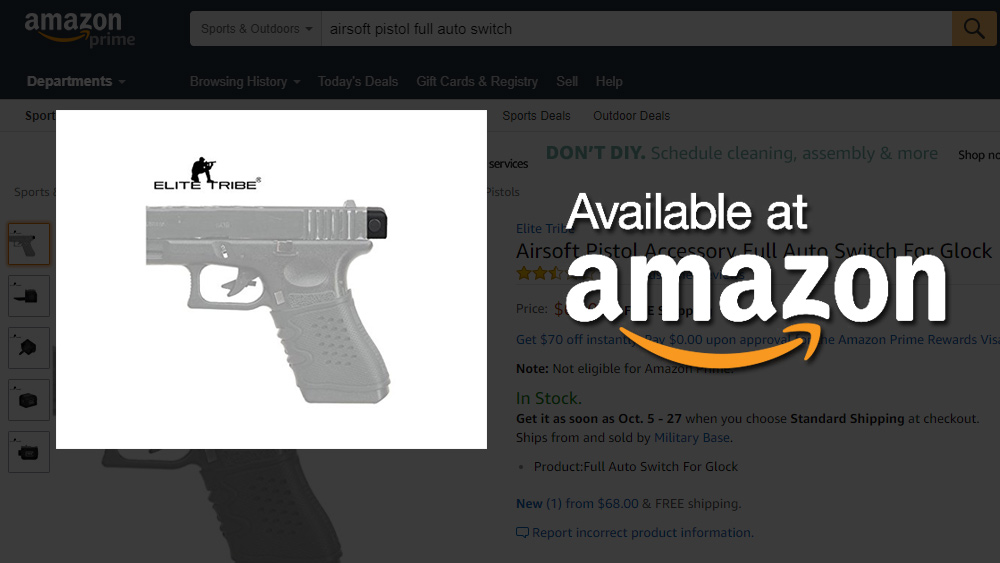 In addition to the fact that Amazon.com is now the world’s largest marketplace of contaminated, untested dietary supplements and food, a Natural News investigation confirms that Amazon.com has rolled out a “gun-running” sting operation to get its own customers charged with felony crimes by the ATF.

Amazon.com, which has always prohibited the sale of firearms, has been openly selling a Glock-compatible full auto conversion device that turns a pistol into a fully automatic weapon. We are not linking to the purchase page for the simple reason that Amazon.com is running a trap, and we don’t want anyone to accidentally fall into that trap and end up spending 10 years in federal prison for buying this device from Amazon.

This device, for sale on Amazon.com for a mere $68 and described as an “Airsoft” accessory, is part of a sting operation where Amazon.com is attempting to entrap its own customers so that they can be raided by the ATF and charged with felony crimes for illegally possessing class-III (full auto) firearms conversion devices, which are strictly prohibited under federal law unless you complete an exhaustive application and approval process with the ATF: An obvious ATF sting operation with the willing cooperation of Amazon

The reason we know this device is being deliberately allowed on Amazon.com as part of an ATF sting operation is because pistols, rifles and suppressors never just “accidentally” show up on Amazon.com. Amazon polices its online marketplace to make sure such items never appear, yet this highly illegal full auto conversion device has been allowed to stay online for nearly a full day as of this writing.

Furthermore, Amazon.com’s founder, Jeff Bezos, is an anti-gun globalist who has used his newspaper — the “fake news” Washington Post — to try to overthrow the U.S. election and destroy the Trump administration at any cost. The pattern of deception, fake news and fictional “anonymous sources” embraced by the Washington Post perfectly mirror Amazon.com going “full snitch” on its own customers, attempting to lure them into purchasing illegal products that will land them in prison.

It’s all part of the Jeff Bezos war on the Second Amendment and his sick, twisted desire to eliminate his political opponents by any means necessary… even if it means turning Amazon.com into a law enforcement trap.

Many of Amazon’s customers, however, are not being fooled. See some of the comments: The upshot of all this is that Amazon.com is reminding its own customers not to trust shopping at Amazon.com. Because with Prime shipping, you too can earn a felony criminal sentence with the convenience of two-day shipping. It’s also obvious that Amazon.com plans to share the names and addresses of buyers with the ATF.

If Amazon is willing to sell highly illegal “full auto” conversion hardware to entrap its own customers into accidentally committing felony crimes, then what else is Amazon selling that’s also illegal? Will Amazon start selling meth, heroin and cocaine while turning over names and addresses to the DEA?

Here’s an even bigger question: If the Amazon.com description of this device is intentionally misleading — this one claims to be for an “Airsoft” Glock, not a real Glock — then isn’t Amazon itself complicit in the commission of the crime if someone purchases this product based on the misleading description?

In other words, isn’t this classic entrapment now being run by Jeff Bezos and Amazon.com as part of a sickening ramping up of secret police tactics against honest American citizens?

Amazon.com becomes a snitch network to help prosecute its own customers

This all looks like part of an effort for Jeff Bezos to turn the Amazon.com marketplace into a snitch network that spies on its own customers, entices them with misleading product descriptions, then reports them to authorities for arrest and prosecution. This is on top of all the other bizarre Big Brother activity Amazon has been engaged in, such as selling spooky “fashion spy cameras” that people are supposed to install in their bedrooms so that Amazon can spy on people as they change clothes or use the toilet.

You have to hand it to Bezos, though: He sure has mastered the art of globalist deception. In the same way the Washington Post uses fake news to try to overthrow the outcome of a democratic election, Amazon.com is now actively working to imprison Bezos’ political opponents (pro Second Amendment people) through similar acts of deception and subterfuge.

This is what America has come to now, under the thumb of evil globalists like Jeff Bezos: A place where fake narratives are pushed by fake mainstream news publishers that are owned by online e-commerce monopolists who run police state sting operations against their own customers. That’s the Bezos mantra: If he’s not screwing with your head, he’s trying to take away your freedom through deception.