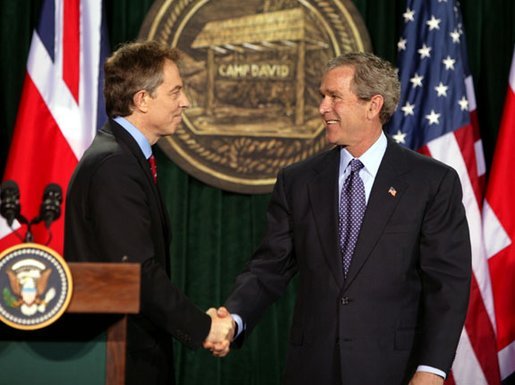 If you ever wondered whether or not at the core of both major political parties lies a cabal of “establishment types” who all seek the same foreign and domestic policies, wonder no more. Former President George W. Bush just provided all the proof you need.

For eight long years Bush endured attacks from President Barack Obama, Democrats and their sycophantic allies in the now-discredited Beltway press. Bush was blamed for the wars in Iraq and Afghanistan (“Bush lied, people died”); he was blamed for doubling the national debt (by Obama no less, who doubled it again under his watch); and despite having its origins in the Clinton administration, Bush was primarily blamed for the housing collapse, which led to the worst recession in a generation.

Yet, he didn’t utter a peep – either in defense of himself or in criticism of Obama, when the latter’s so-called “stimulus package” became just a payoff to unions and other Democratic allies; when he lied repeatedly to get the disaster that is Obamacare signed into law; when he withdrew prematurely from the Middle East, creating a power vacuum that has left millions dead, missing, or displaced; when his secretary of state Hillary Clinton, surrendered 20 percent of our strategic uranium to the Russians; when Clinton was caught compromising U.S. national security by using a personal unsecured (and unauthorized) private email server; and when he made a horrific “nuclear deal” with Iran that our lone, true Mideast ally Israel pleaded with him not to make.

But now, just days into Trump’s administration, we’re led to believe that the No. 43 “just can’t be silent anymore” because….Trump. And we now know that anything #nevertrumpers do to undermine the current president is okay with the establishment.

In recent media appearances, Bush said this about Trump:

— “I don’t like the racism and I don’t like the name-calling and I don’t like the people feeling alienated. Nobody likes that.” Naturally, this is in reference to Trump’s executive orders directing appropriate federal agencies to actually enforce immigration laws as they are written. Since when is it racist to do that? And name-calling? Does Bush not remember what the Obama administration called him? Obama called 43 “unpatriotic” and “irresponsible” for running up the debt, and the Obama team repeatedly insulted Bush’s intelligence. Where was he then? Or when Left-wing lunatic Rep. Maxine Waters, D-Calif., called Trump and his Cabinet members “scumbags?” Pretty selective with your distaste, 43.

— “We need an independent media to hold people like me to account.” This, of course, is a slap at Trump’s trolling of the crooked establishment media, which has lied about him, published false innuendo that they tried to pass off as “intelligence,” fake news, and outright unsubstantiated accusations. It should be noted that the irony here is disgusting: Bush is using the same mainstream media that savaged him regularly during his eight years in office to bash Trump. (RELATED: Trump Bypasses Corrupt, Dishonest Mainstream Media And Takes His Message Directly To Americans)

— “Power can be very addictive and it can be corrosive, and it’s important for the media to call to account people who abuse their power.” No question about that, and Trump isn’t saying that the press should not hold him or any other elected official to account. What Trump and his administration have been saying is that the coverage of them at least ought to be based on factual data and honest perspective, and clearly it has not been. (RELATED: It’s Been Less Than A Month Since Trump Took Office And The Media Has Already Pushed 76 Fake News Stories)

— “It’s kind of hard to tell others to have an independent free press when we’re not willing to have one ourselves.” This was in response to an earlier statement Bush made to NBC’s “Today” co-host Matt Lauer, in which he said he spent a lot of time during his presidency trying to convince Russian President Vladimir Putin to promote an independent press. Again, Trump is not trying to censor or silence the media. His characterization of the media as “the enemy” is directed at the major outlets like CNN, The New York Times, the Washington Post and others that willfully publish leaked national security information so as to undermine his agenda and his presidency.

— “I think we all need answers.” This was Bush’s partial answer to Lauer’s question regarding the fake “Russia connection” between Trump and his advisors. The answer is simple: There is no connection, and the FBI’s No. 2 man has said so. But the media and deep state #nevertrumpers are perpetuating this lie as though it were real.

That Bush is now speaking out against Trump – as Obama already has, in record time for an ex-president – without ever having publicly taken issue with his successor, despite having ample opportunities to do so, tells you all you need to know about the existence of a single “establishment” mindset in Washington.