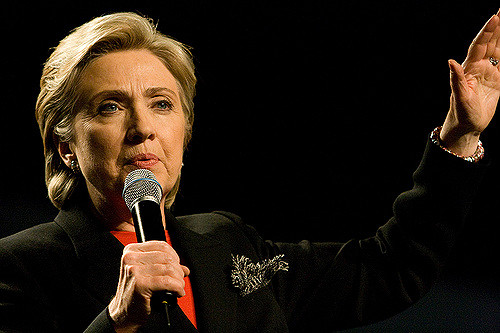 Documents released Friday by the Federal Bureau of Investigation reveal that Hillary Clinton told the agency she could not recall all of the briefings she received on preserving sensitive materials during her transition out of her job as Secretary of State after a concussion she sustained in 2012.

According to the documents — which detail the FBI’s now-closed investigation into Clinton’s use of a private email server during her tenure at the State Department — Clinton told investigators during an interview on July 2 that she “received no instructions or direction regarding the preservation of production of records” after stepping down as Secretary of State in early 2013.

“However, in December of 2012, Clinton suffered a concussion and then around the New Year had a blood clot,” the FBI report states. “Based on her doctor’s advice, she could only work at State for a few hours a day and could not recall every briefing she received.”

Clinton did not have any discussions with aides about turning over her email records, nor did anyone from State request them. She believed her work-related emails were captured by her practice of sending email to the state.gov email addresses of her staff. Clinton was unaware of the requirement to turn over printed records at that time. Her physical records were boxed up and handled by aides.

Clinton sustained the concussion in 2012 after a fall. She later said she had experienceddouble vision and dizziness after the incident, but has maintained that there have been no lingering effects from the concussion.

The release of the FBI documents comes as Clinton has sought to defend herself in recent weeks from claims that she is not physically healthy enough to be president.

In January, nationally syndicated radio host and then-HLN television personality Dr. Drew Pinsky expressed fear that Clinton could suffer a pulmonary embolism due to “serious” blood clotting in her leg. Dr. Pinsky reiterated his concern in a radio interview in August, telling Drew McIntyre that based on information her doctors have provided, he was “gravely concerned not just about her health, but her health care.”

“Both of us concluded that if we were providing the care she was receiving, we would be ashamed to show up in a doctors’ lounge,” Dr. Pinsky said. “We would be laughed out. She’s receiving sort of 1950s level care by our evaluation.”

Clinton has hit back at the claims in media interviews and in an appearance on ABC’sJimmy Kimmel Live! in August, in which she opened a sealed pickle jar to demonstrate her strength.

“I don’t know why they are saying this,” Clinton told Kimmel of questions about her health. “I think on the one hand, it is part of the wacky strategy, just say all these crazy things and maybe you can get some people to believe you. On the other hand, it just absolutely makes no sense. I don’t go around questioning Donald Trump’s health. As far as I can tell, he is a healthy as a horse.”

The FBI documents — released just before the Labor Day holiday weekend in the U.S. — also revealed that Clinton lost several mobile phones containing emails from her private server while serving as Secretary of State.

Tom Fitton opens the bidding on the bogus right-wing conspiracy theories. That’s not what the 302 says. https://t.co/NVWKQeBuje

Reuters, which first characterized her language as telling the FBI she did not recall briefings “due to a concussion suffered in 2012,” has extensively updated its story but not backed down from the fact that Clinton brought up the “health scare” as part of the defense she gave to investigators.