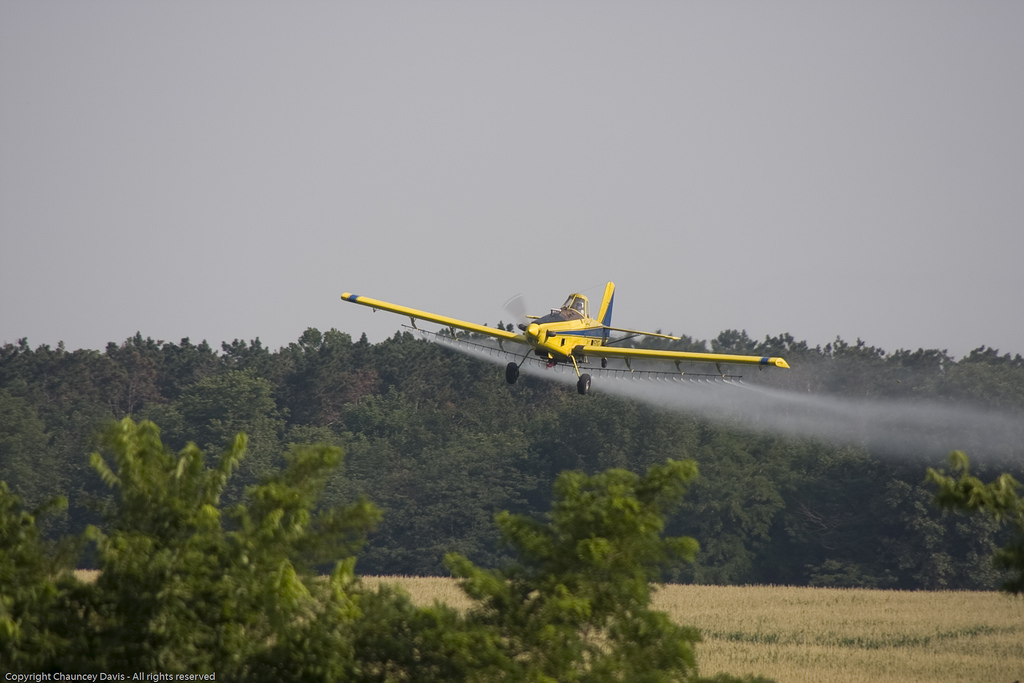 In South America, millions of acres have been annihilated and transformed into GMO mono-crop fields of soy, corn and sugar cane, replete with planes spewing chemical trials of Roundup overhead. Many of these enormous fields are next to small villages and residents who are no longer able to grow diverse crops, or have a choice in what they are breathing. Peruvian schoolchildren recently experienced a personal lesson in GMO death economics.

Sputnik reports, ” . . .nearly 100 people at an elementary school in Northern Peru were made violently ill when a plane fumigating nearby fields released weed-killer. Reports stated that 92 school children and 3 teachers were exposed to the dangerous herbicide glyphosate, the active ingredient in US biotech giant Monsanto’s best-selling product, Roundup.

“A health official in the municipality of Nepena said at a news conference that children in the school suffered a range of symptoms, including extreme vomiting, fainting, stomach pains, and headaches as a result of the exposure. . . [the] incident involved . . . a crop duster [that] sprayed an adjacent sugar-cane field owned by Peruvian agricultural giant Grupo Gloria without a necessary municipal permit.”

Glyphosate may not be the worst of Roundup’s ingredients, though it is listed as a carcinogen by the International Agency for Research on Cancer (AIRC), a subset of the World Health Organization (WHO).

Glyphosate is not the only toxin in Roundup. Other adjuvants, like POEA, are used in the formulation that are toxic in themselves. The Detox Project writes, “The adjuvants are toxic in themselves and increase the toxicity of glyphosate by enabling it to penetrate plant and animal cells more easily, making it more bioavailable. . . In reality, humans and animals are never exposed to glyphosate alone, but to the complete formulations. This means that Roundup and other glyphosate formulations have never been tested and assessed for long-term safety.”

The combination of adjuvants and glyphosate in Roundup are even deadlier.

The Detox project reports, “In an in vitro study, eight out of nine major pesticides tested in their complete formulations, including Roundup, were up to 1000 times more toxic to human cells than their isolated active ingredients. This increased toxicity of the complete formulation compared with the active ingredient alone was found to be a general principle of pesticide toxicology.”

Mothers and children in Argentina have suffered immensely from planes spewing Roundup.

Monsanto began its assault on Argentina’s agriculture around the year 2000. GMO crops quickly took over 50% of their land mass. It didn’t take long for residents and doctors to notice an unusual spike in birth defects, infertility, miscarriages, and cancers. There were other, more minor effects: vomiting, rashes, respiratory problems. Doctors began to speak out.

GM Watch reports, “Dr DarÃ­o Gianfelici, from Cerrito, Entre RÃ­os, Argentina, said . . . ‘GM soy has been a death sentence for humans and for the environment. No money can compensate for the damage that has been caused the contamination, the deaths, the cases of cancer and malformations.'”

The late Dr. Andres Carrasco is also to be thanked for his outstanding research on Roundup’s environmental damage.

From GM Watch, ” . .  in 2009,  senior Argentine government scientist Professor Andres Carrasco went public with his research findings . . .[Carrasco discovered] glyphosate causes malformations in frog and chicken embryos at doses far lower than those used in agricultural spraying. . .’The findings in the lab are compatible with malformations observed in humans exposed to glyphosate during pregnancy,’ said Carrasco. ‘I suspect the toxicity classification of glyphosate is too low … in some cases this can be a powerful poison.'”

In this video, Dr. Alex Vasquez, BS, DC, ND, DO calls glyphosate, “The Toxic Chemical of the Year.” It’s a must-watch.