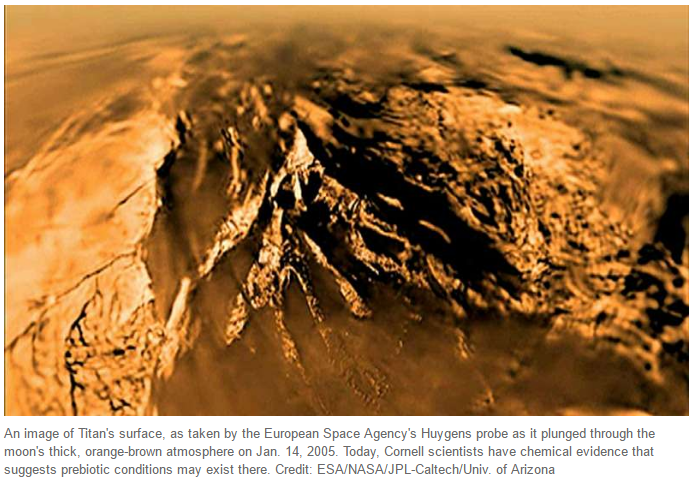 A team of researchers at Cornell University has built and run a simulation that showed prebiotic reactions could possibly occur on the surface of one of Saturn’s moons, Titan, suggesting the possibility of life evolving in a place where it is too cold for water to be a factor. In their paper published in Proceedings of the National Academy of Sciences, the team describes the simulation they created in response to the discovery (by the Huygens probe) that polymers such as polyimine might have already developed on the moon’s surface.

As scientists continue to search for life on other planets, more and more they are beginning to concede that if it does exist, it may not necessarily exist in the Goldilocks, or habitable zone. Such planets are all the “right” distance from their star, and hopefully, also have water. But recent evidence has suggested that some chemical reactions could lead to types of life forms where there is no water, which further suggests that it may exist outside of what is now considered the habitable zone.

For life to come about in such places, researchers reason, there would likely need to be some sort of action going on—and that is why there has been so much focus on Titan; it is the only object in our solar system, besides Earth, that has both rainfall and erosion due to liquid movement. But the water it has is locked far underground and the moon is too cold to support an impact by water anyway. But, as the researchers with this new effort discovered after poring over data sent back by Huygens, the surface does have hydrogen cyanide in its sediment, brought down from the atmosphere by methane and ethane rain.

It was those molecules that drove the design of the simulations—the team wanted to see if they could form the basis of reactions that could lead to the creation of polymers such as polyimine, which the team notes, are conducive to the formation of prebiotic reactions leading to a form of life. Their simulations showed that such reactions are possible and that the structures that came about were also able to absorb sunlight in the wavelengths present on the Titan surface.

The researchers suggest their work, and that done by others indicates that a return to the planet by a new probe might be in order, one able to test for a different form of life, or at least its precursors.

The chemistry of hydrogen cyanide (HCN) is believed to be central to the origin of life question. Contradictions between Cassini–Huygens mission measurements of the atmosphere and the surface of Saturn’s moon Titan suggest that HCN-based polymers may have formed on the surface from products of atmospheric chemistry. This makes Titan a valuable “natural laboratory” for exploring potential nonterrestrial forms of prebiotic chemistry. We have used theoretical calculations to investigate the chain conformations of polyimine (pI), a polymer identified as one major component of polymerized HCN in laboratory experiments. Thanks to its flexible backbone, the polymer can exist in several different polymorphs, which are relatively close in energy. The electronic and structural variability among them is extraordinary. The band gap changes over a 3-eV range when moving from a planar sheet-like structure to increasingly coiled conformations. The primary photon absorption is predicted to occur in a window of relative transparency in Titan’s atmosphere, indicating that pI could be photochemically active and drive chemistry on the surface. The thermodynamics for adding and removing HCN from pI under Titan conditions suggests that such dynamics is plausible, provided that catalysis or photochemistry is available to sufficiently lower reaction barriers. We speculate that the directionality of pI’s intermolecular and intramolecular =N–H…N hydrogen bonds may drive the formation of partially ordered structures, some of which may synergize with photon absorption and act catalytically. Future detailed studies on proposed mechanisms and the solubility and density of the polymers will aid in the design of future missions to Titan.