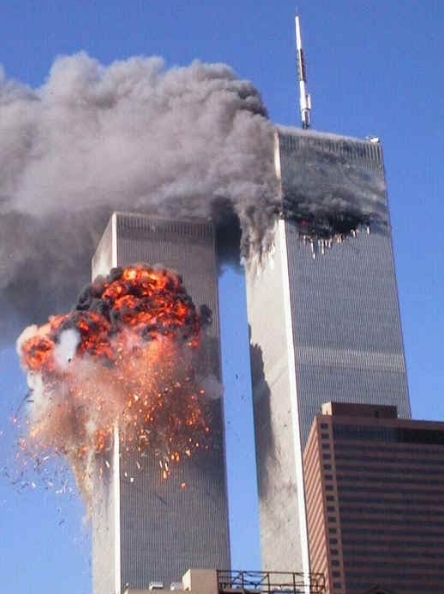 Although it’s now public knowledge that former Florida Sen. Bob Graham told the Tampa Bay Times that the secret 28 pages of the 9/11 Commission report are poised to be released within the next few months, one can only question what the White House’s new and urgent motive for their release is.

One thing comes to mind, right off the bat, and that is the fact that strong evidence exists suggesting that up to three thermonuclear devices were detonated at the World Trade Center site on 9/11, hence the nickname “Ground Zero.”

I mean, what better way than to dupe the people yet once again by slowly conditioning them, over an extended period of time, to accept the fact that criminal factions of their very own government orchestrated the Pearl Harbor-like attack onto skyscrapers, buildings, in an American city.

That’s right, when the not so secret 28 pages are actually released, in a few months, they will likely show Saudi involvement and government foreknowledge, like we already knew.

Study of Traces of Tritium
at the World Trade Center (Oct. 2002)/U.S. Department of Energy

“Tritium is an important component in nuclear weapons. It is used to enhance the efficiency and yield of fission bombs and the fission stages of hydrogen bombs in a process known as “boosting” as well as in external neutron initiators for such weapons,” according Wikipedia; meaning that the only way it would be present in high trace levels is if a nuclear device (or three) detonated within proximity. Additionally it’s important to note that tritium is “extremely rare on Earth” and again — should not be found in at levels reported to be ’55 times higher than normal.’

And just to be clear, I am not saying that micro nukes were solely responsible for bringing down the towers — and IMO were likely only used at the base of Towers 1 and 2 and possible the base of building 7 and were strategically placed 50 feet below street level, somewhere in the basements of the buildings or subway access tunnels. This would also explain numerous eyewitness reports of “large” explosions in the basement or “lobby” of the towers.

It has also been proven that Nano-thermite was used and was present in dust samples, less than 2 microns in diameter, that were taken from the WTC site after the Sept. 11, 2001 attacks as pointed out early on by Richard Gage of the grassroots organization Architects & Engineers for 9/11 Truth.

Moreover there are also signs that advanced barometric bomb technology, which uses triggering devices derived from the U.S. Nuclear Weapons Program, was also deployed in the attack — technology which incorporates gaseous elements in a “yellowish, brownish combustible mixture” and uses Aluminum Silicate Red Oxide and other ingredients” that would have surrounded and permeated the air around key structural columns on all floors before being triggered by a “specific high-voltage pattern” which the element combination is responsive to.

One bomb specialist, who wanted to remain anonymous for obvious reasons, can be seen in the proceeding video, testifying to the existence of such technology and said:

“[The high-voltage pattern] produces sort of a stairway pattern in the molecular structure of the cloud. Part of that pattern is a hydro-dynamic power generator, energy source, permeating the cloud which is then energized with another energy source and then is detonated. This causes the cloud itself to explode in such a fashion that if the cloud is circulating around the pillar — then it crushes the pillar from all sides and turns that pillar literally to dust and leaves only the rebar behind. So if you’ve got this cloud permeating all the way around the first floor, wherever it is, anything within its path gets crushed, imploded, to dust instantaneously. And when that happens of course there is nothing left to hold up the upper floors above, so bang, they come down like a pancake.”

This also explains why an eyewitness by the name of Kenneth Summers, who was in the lobby of tower 2 at the time, actually saw such a gas-like substance mixing with the air just a “tenth of a second” before the witness was blown back out the lobby doors. Kenneth Summers told NBC what he saw just before being eject from the lobby by a massive explosion and stated:

“All of a sudden it seems like the whole lobby, the door I was in, filled up with a yellowish, brownish, combustible mixture. It didn’t really smell any different, but was so quick to happen, it was like a tenth of a second.”

Summers testimony starts at 5:08 into the following video:

Look, all I know is the actual impact from the alleged passenger planes did not cause the collapse of the WTC’s towers 1 and 2 that stood proud above the New York skyline, nor did the jet fuel fires or random fires burning throughout the buildings. In fact we can clearly see that this was not the case, because the tops of the buildings actually started to collapse first, dustifying themselves in mid-air as reported by Dr. Judy Wood who conducted an independent investigation.

Micro-nukes exist and have for a long time

The Special Atomic Demolition Munition (SADM) was a family of man-portable nuclear weapons fielded by the US military in the 1960s, but never used in actual combat. The US Army planned to use the weapons in Europe in the event of a Soviet invasion. US Army Engineers would use the weapon to irradiate, destroy, and deny key routes of communication through limited terrain such as the Fulda Gap. Troops were trained to parachute into Soviet occupied western Europe with the SADM and destroy power plants, bridges, and dams.

The project, which involved a small nuclear weapon, was designed to allow one person to parachute from any type of aircraft carrying the weapon package and place it in a harbor or other strategic location that could be accessed from the sea. Another parachutist without a weapon package would follow the first to provide support as needed.

The two-person team would place the weapon package in the target location, set the timer, and swim out into the ocean where they would be retrieved by a submarine or a high-speed surface water craft.

In the 1950s and 1960s, the United States developed several different types of lightweight nuclear devices. The main one was the W54, a cylinder 40 by 60 cm (about 16 by 24 inches) that weighed 68 kg (150 lbs). It was fired by a mechanical timer and had a variable yield equivalent to between 10 tons and 1 kiloton of TNT. The W54 nuclear device was used in the Davy Crockett Weapon System.

Now do I have your undivided attention?

On 9/11 there is no doubt that multiple bombs were detonatedinside the WTC complex — this fact can not be disputed and is clearly documented in hundreds of videos and backed up by many eyewitness testimonies, including highly credible first responders and firefighters. In fact, seismic readings from that day indicate that at least 3 large man-made explosions, possibly nuclear by signature, took place underground inside the WTC complex. Could these be the actual blasts that took out the cores of buildings 1, 2 and 7? Is this what the U.S. government has been hiding all along?

Interestingly, previous tests have been conducted by factions of the U.S. government in which they used micro-nukes to demolish rather large buildings and the results were astonishing to say the least, almost a perfect mirror of the collapse of buildings 1, 2, and 7 that took place in Sept. of 2001.

It’s safe to say that high energy releases have a distinct look.

Dr. Ed Ward has documented what he believes is the use of micro-nukes on the World Trade Center complex attack that took place in September of 2001.

One of the smoking guns in this case is that over 5.3 billion pounds of steel was instantly turned into 2 billion pounds of dust, but that’s not all — massive steel beams were bent like pretzels as the towers collapsed.

One video shows the penthouse on building 7 being demolished on the roof just before the building comes down. This proves that a top-down demolition process was being utilized, otherwise the buildings might have just twisted and naturally would have just fell over themselves. But perhaps the most startling revelation that nuclear devices were used is the fact that vehicles that were found up to a half mile away from the WTC looked incinerated — not to mention the tens of thousands of tiny body parts that were found on the rooftops of neighboring buildings which is not indicative at all of a gravitational collapse.

The fact that many of the first responders are now dead, if not very sick, does not sound like the byproduct of a falling building, but rather sounds more like they got a massive dose of deadly radiation. Most of the responders have died of blood cancer and Thyroid cancer, consistent with heavy radiation exposure.

Other red flags include:

Additionally the fact that the WTC buildings were pulverized into a fine dust cannot be ignored. This is a tell-tale sign of a high energy release typical of a nuclear explosion. Eyewitness accounts and personal testimony indicate that people were thrown an entire city block from what was described as a warm wind just as the towers begin to collapse.

There were also multiple reports of “hanging skin” or “melted skin” on victims around ground zero. This was a common occurrence in the Hiroshima blast. Major hot spots were also reported in and around the debris at the World Trade Center complex and were prevalent for up to six months after the attacks. This type of activity, seen with the hot spots, is commonly referred to as “China Syndrome”, where nuclear material will continue to undergo fission for a period of time, generating massive heat plumes.

To no surprise, videos obtained via Freedom of Information ACT (FOIA) requests, captured on and after Sept. 11, 2001 near the WTC site, have had sections, clips, of the video and audio removed, especially during the beginning of the collapse of the towers. However, the explosions can be heard on many independent videos, now floating around the web and can all be accounted for.

Not to mention the hijackers, some of which have still been proven to be alive, were recruited by the CIA, as can be seen in the following video:

The truth is out there.