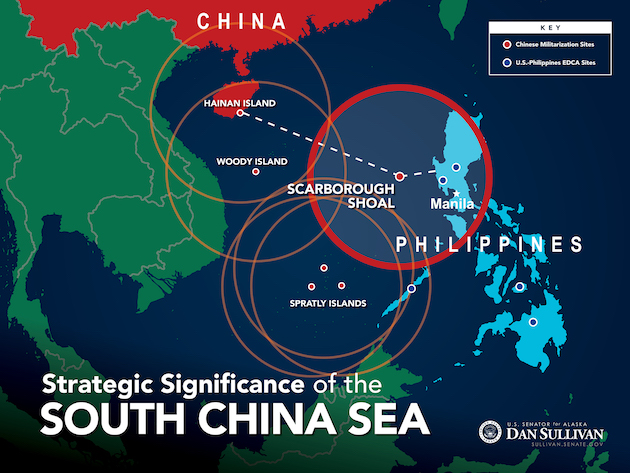 During testimony before the Senate Armed Services Committee, Carter was asked about the strategic significance of Beijing’s plans to build military facilities on disputed Scarborough Shoal, which is claimed by Manila but which China occupied in 2012. The island is located well within missile range – 120 miles – of Subic Bay, Philippines, where the U.S. will base some of its warships.

Carter said that the island is “a piece of disputed territory that, like other disputes in that region, has the potential to lead to military conflict.”

“That’s particularly concerning to us, given its proximity to the Philippines,” Carter told the committee, which had met to discuss the Islamic State terrorist group, the Washington Free Beacon reported.

The defense secretary also noted that ranking Pentagon officials also hold similar views about several island disputes in the South China Sea, where Beijing has been claiming much of the region as its maritime territory while demanding that other nation-states, including the U.S., stay out of the region.

Carter spoke in response to questioning from Sen. Dan Sullivan, R-Alaska, who revealed during the hearing that Scarborough Shoal is the third vertex of a triangle of Chinese military bases that could be employed to threaten U.S. and Philippine military assets on the main island of Luzon.

A map Sullivan produced showed Woody Island in the Paracels and three others in the Spratly chain that are currently undergoing military transformation by China as part of its island-building program.

“The Chinese have already established two legs of that triangle. The fighters and radars are part of that radius that you see around the Scarborough Shoal,” said Sullivan, with Carter stating that the map was “absolutely accurate” in its depiction of Chinese efforts to create a triangle of bases to blanket the region.

After the hearing Sullivan told the Washington Free Beacon that he is “very concerned” by reports China plans to make Scarborough Shoal the “third site” for missiles and warplanes that close to Subic Bay.

“In addition to seizing and building on a shoal long claimed by the Philippines, a militarized Scarborough—with an air-search radar—would give the PRC full overwatch of flights in and out of northern Philippines, and the deployment of coastal defense cruise missiles there would allow the PRC to hold U.S. forces based and operating in the Philippines at risk,” Sullivan said, using the acronym for People’s Republic of China. “The strategic implications for U.S. and allied forces operating in Southeast Asia are undeniable.”

During the hearing the committee’s chairman, Sen. John McCain, R-Ariz., lashed out at Carter for refusing to confirm U.S. military movements in the region that have been publicly reported.

“This is the second time, Secretary Carter, that you’ve refused to confirm what is well known in the media. That’s not fair to this committee. It’s all been reported there were flights into the area around those islands,” McCain said, as reported by the WFB.

“But to classify the fact that we are sending our ships and airplanes into international waters and have that classified, when it should be magnified throughout the world that United States is asserting our respect and adherence to international law, is something that is confusing and befuddling,” McCain added.

“Why would we want to classify the fact that we are doing what every nation in the world should be able to do? And that’s sail or fly wherever we want to. Why should that be classified information?”

NationalSecurity.news is part of the USA Features Media network.