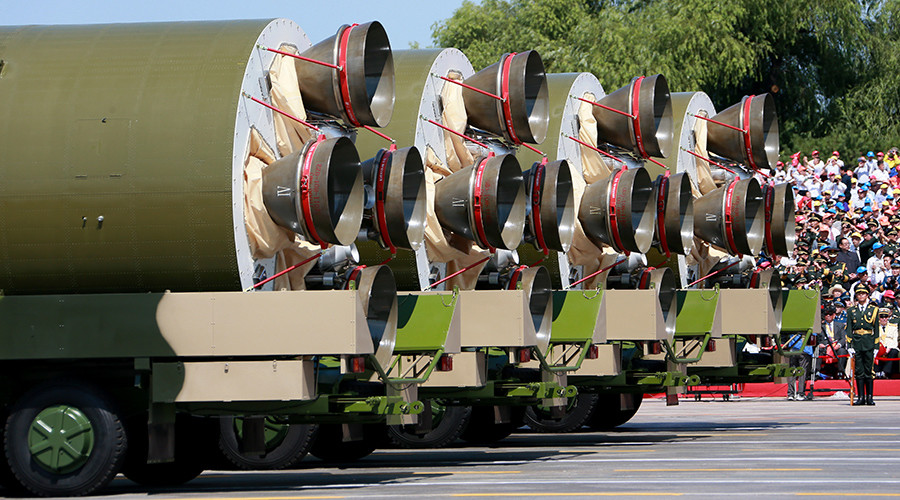 (NationalSecurity.news) The Chinese military conducted another test of its newest and longest-range intercontinental ballistic missile earlier this month as tensions with the U.S. increase over Beijing’s expansion into the South China Sea.

As reported by the Washington Free Beacon, the test of the new road-mobile, nuclear-capable DF-41 occurred in mid-April with a pair of multiple, independently targetable reentry vehicles, or MIRVs, that were monitored by U.S. military satellites and other regional sensor equipment. The location of the launch, however, was not immediately known, though past launches of the missile type were conducted at the Wuzhai Missile and Space Test Center in central China.

Pentagon officials told the news site that the flight test of the DF-41 took place early last week and was monitored in flight by regional sensors and U.S. military satellites.

The latest flight test came about the same time that a high-ranking Chinese general made an out-of-the-ordinary visit to one of several disputed islands in the South China Sea. The test also occurred three days before U.S. Defense Secretary Ash Carter made a visit to the aircraft carrier USS John C. Stennis as it sailed in the region.

Britain’s Mirror reported that the DF-41 was capable of reaching London and various American cities with multiple nuclear warheads within 30 minutes. The site also noted that the missile can carry up to 10 warheads and travel a distance of about 7,450 miles, hitting several targets at once.

Previous reports noted that the missile could be operational as early as this year.

“China and Russia are increasingly coordinating their military forces against the United States and that China’s program of enabling North Korea and Iran to become nuclear missile powers is nearing completion,” Mark Stokes, an expert on the Chinese military and ex-Pentagon analyst, told the Mirror.

China military affairs analyst Rick Fisher, a senior fellow at the International Assessment and Strategy Center, told the WFB that the latest launch of the DF-41 is the seventh reported test, indicating it is likely to soon be added to the renamed PLA Rocked Forces.

“As with previous MIRV tests, the PLA has used a small number of reentry vehicles to mask the real capability of the DF-41, which is estimated to be able to loft up to 10 warheads,” said Fisher.

In addition to fielding the DF-41, China has also begun retrofitting older, single-warhead DF-5 ICBMs to make them MIRV-capable as well, defense officials have said.

“There will initially be two types of DF-41s, a road and rail mobile version, indicating the PLA could be fielding several brigades of this ICBM,” Fisher said.

“In addition, there may be a new MIRV equipped version of the older DF-31, called the DF-31B.”

NationalSecurity.news is part of the USA Features Media network.