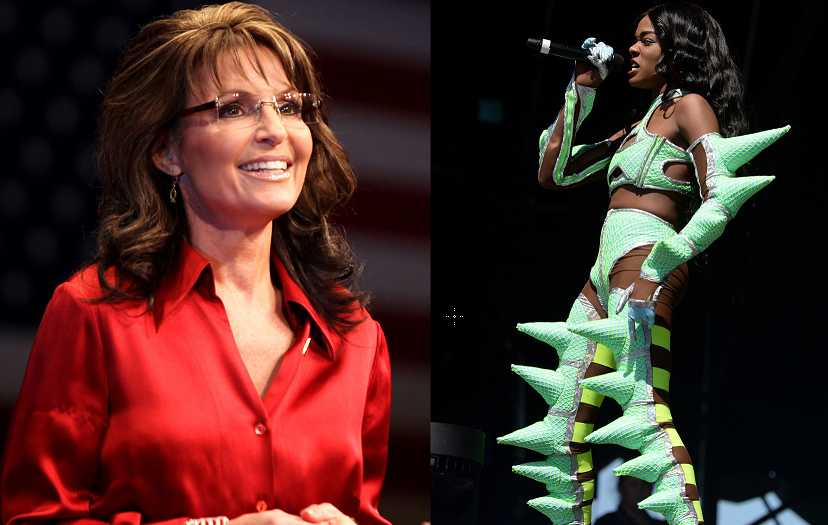 Some people don’t realize what satire is. Those people include female rapper Azealia Banks.

A satire piece falsely attributing quotes to Sarah Palin riled up Banks who took to Twitter to declare that Palin should be gang raped and worse.

The false quotes included lines like: “I’m telling you, I’ve been saying it for years, but nobody’s listening – slavery wasn’t forced onto African-Americans, they accepted it willingly.”

But here is what Banks did say: 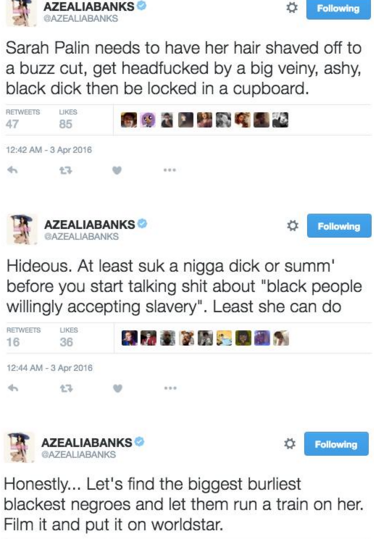 “Honestly… Let’s find the biggest burliest blackest n****** and let them run a train on her. Film it and put it on worldstar,” wrote Banks in one Tweet. Another: “Hideous. At least suk a n**** d*** or summ’ before you start talking s*** about ‘black people willingly accepting slavery.’ Least she can do.” 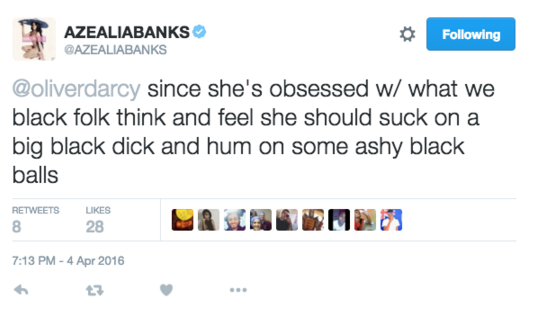 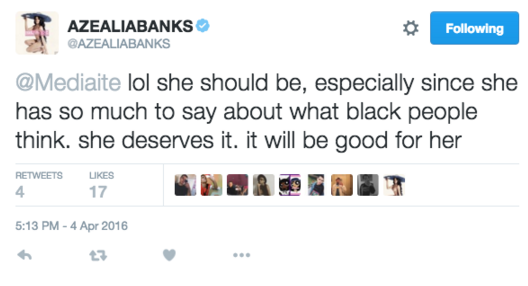 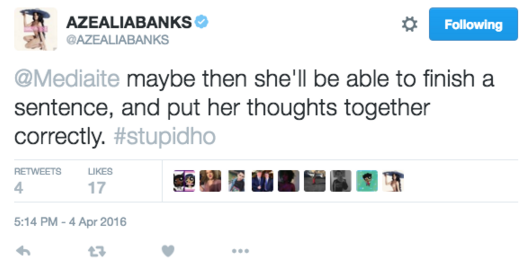 The problem isn’t that Banks sounds like an ignorant moron and made the comments after getting angry at what was obviously a satire piece falsely attributing quotes to Sarah Palin that Palin never even said.

The problem is the normalization and cultural acceptance of reverse racism, which always gets a pass in these situations.

As we all know, if a famous Caucasian person had Tweeted these lovely “thoughts” to the world, not only would the public outcries of racism reach far and wide, but that person would likely be charged with a hate crime if the politically correct authorities in this country could find a way to legally do so. In Britain, that person would be charged with an anti-social hate crime for sure… if they were white.

But because Banks is African American, she can Tweet threats of racially motivated violence and gang rape at a former white Governor and that’s just a-okay. We’re all supposed to accept that and look the other way because “Black Lives Matter” and white privilege, right? 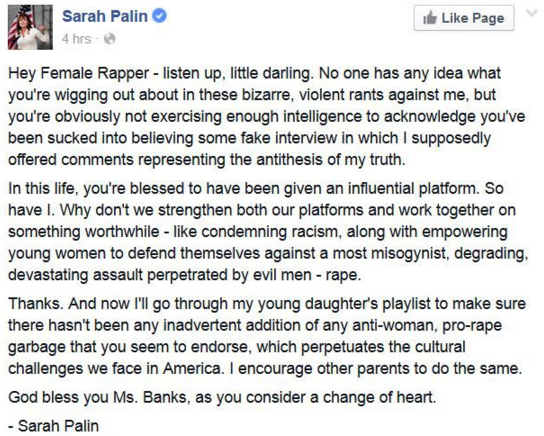 And a threat to sue. Palin told People Magazine:

“I’ve had enough of the unanswered threats and attacks against my family and me,” Palin says. “So, for the first time I’m going to enjoy the only retribution some protected ‘celebrities’ seem to understand – I’m suing Azealia Banks and can’t wait to share my winnings with others who have gone defenseless against lies and dangerous attacks far too long.”

Banks responded to Palin with this non-apology “apology” on Tumblr:

A Letter to Sarah Palin

I hope this message reaches you in good spirits and in good health. I want to start this letter off by telling you that I actually, really like you. While many other American people may see you as someone to be ridiculed, I truly believe that you possess a certain “je ne sais quoi,” (a french term which is often interpreted to denote one’s inexplicable charisma.) Given a bit of book-reading/media-training/patience, that charisma could become your magic carpet. There is something very charismatic and misunderstood about you. The misunderstood bit oftentimes reminds me of myself. You’re very passionate about the things you believe in, super determined, and most certainly aware of who you are and where you stand in this world, as a parent, as a politician, but most importantly, as a woman.
Given the propensity of conservative right-wing media publications to veer into very fearful/erroneous/baseless/contradictory/prejudice analyses of us “melanated,” peoples of the United States, It should come as no shock to you that a satirical article accusing you of saying, “Even the French understand that Slavery wasn’t our fault because the negroes liked it,” Would be provocative enough to ruffle a few feathers. Now since learning that the article was not published officially, I sincerely apologize for any emotional distress or reputational scarring i may have caused you.
In my honest defense, i was completely kidding. I happen to have a really crass, New-York-City sense of humor, and regularly make silly jokes in attempts make light of situations which make me uncomfortable. As the fabric of the American Nation is EMBEDDED with racism, I merely made a raCIALly driven joke to counter what i believed to be real, raCIST rhetoric.  Also, i never said you should be raped. I used the term “run a train,” which is slang for group sex, NOT for “rape.” There are many distinctions between the two. As a woman, I would never trivialize something as lewd and criminal to provide myself any sort of comic relief because it simply… just isn’t funny. (and no, urbandictionary.com is not a reputable source of information to seek clarity on the aforementioned dichotomy). However, i find great irony in the right-wing media’s attempt to “victimize,” you in this situation. Seeking empathy through sensationalism is something left-leaning liberals are frequently ridiculed for by the Right. But American Hypocrisy is nothing new.
Considering the imminence of 2016’s polarizing presidential election, I’ve taken it upon myself to do my own social research. I’ve recently had the opportunity to indulge in a few lengthy conversations with some very popular conservative figures. I’ve concluded: Amongst millennial conservatives, Censorship paired with the (questionable) social necessity for political correctness are atop the list of social grievances. It is as though this newest generation of conservative voters desire the right to express their true feelings, free of any filter and free of any consequence. I too harbor a similar sentiment regarding censorship and self-expression, as i am an artist. I cherish my ability to express myself freely, yet remain totally aware that for every action, there will be a reaction.
All in All, Woman to Woman, I hope you will accept my sincerest apology.

P.S.:
-I am an EXTREMELY intelligent woman, Mrs. Palin.
-“Hey Female Rapper,” was your way to euphemize what you REALLY wanted to say. What you wanted to say was, “Hey little Stereotypical Black, Thing!”
-Realize that stereotypes are a product of what I like to call the “Critical White Gaze.” The basic fundamentals of the Critical White Gaze are Fear, Ignorance, Curiosity, and Fetishization.
-Intelligence is not something which can be quantified in 140 Characters.
-Twitter is not real, neither is your opinion of me!
-If Bristol Palin listened to my music she probably wouldn’t have all those cotdamn kids!!!! ;-P #sis #iud #stayinschool #causeitsthebest

Yes, she really seems like an “EXTREMELY intelligent woman”… can’t imagine why anyone would accuse her of anything different.

So threatening someone with racially motivated gang rape is just a New York sense of humor and it’s all a big joke because Twitter isn’t real?

What’s not funny is that we know if the situation was reversed, the reaction and calls for retribution would be totally different here and we all know why.

Banks is so intelligent, she doesn’t even get the irony of how utterly racist she is.

Banks has since taken down her nasty Tweets, probably after she realized A) the Palin article was satire and untrue and B) she made herself look like a horrible human being whose record sales, which are probably from a largely young female audience, could be hurt by advocating gang rape against a woman, regardless of why. That or, you know, being sued.

No, it’s probably just the first one. Banks doesn’t seem to care all that much what brand of stupid comes out of her on the Internet.

Or in real life: