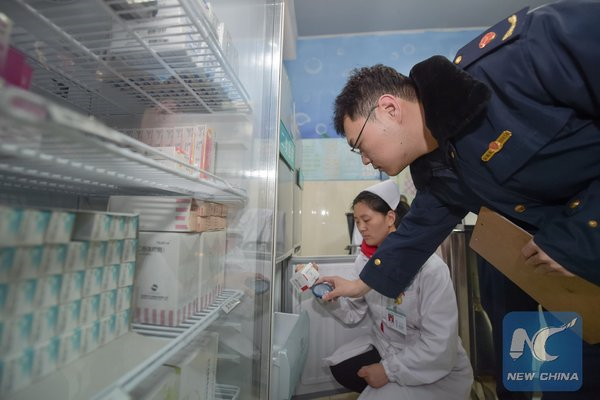 Fraud is a well stirred recipe in the U.S. corporate state. But the guilty parties are megalithic pharmaceutical companies like GlaxoSmithKline (GSK). In July of 2012, GSK was fined $3 billion dollars in criminal and civil liabilities concerning their branding and use of Paxil and Wellbutrin. It was the largest healthcare fraud settlement in history. But a company like GSK has deep pockets to pay huge fines and keep on marching. In the case of China’s recent vaccine scandal, the guilty party was not a huge conglomerate with deep pockets; it was a mother and daughter. The BBC reports:

“Chinese citizens have reacted with anger and alarm at news of a massive illegal vaccine operation uncovered in Shandong province. The illegal vaccine ring [in operation since 2011] involved hundreds of people, and affected 24 provinces and cities, local media said

The ringleaders, who have been arrested, were allegedly a mother and a daughter who purchased the vaccines from licensed and unlicensed sources, and then sold them on to illegal agents or local disease control and prevention centres for high prices, reported Xinhua state news agency.

The $88m (£61m) worth of vaccines [which included those for polio, rabies, mumps, encephalitis, hepatitis B and meningococcal diseases] were not adequately refrigerated nor transported in approved conditions. The potentially compromised vaccines could cause disability and death, Xinhua said.”

Chinese authorities had known about this illegal vaccine ring for nearly a year, yet said nothing

Saying nothing was the playbook used by the Center for Disease Control (CDC) in the case of Poul Thorson, whose so called research was used to disprove the link between vaccines and autism. His indictment for fraud, as the Age of Autism reports:

“He is a fugitive wanted by American authorities [under] investigation for collecting millions of dollars in bogus “grant” money, misrepresenting himself to his employers and the world and possibly forging the documents that enabled the scam… It appears the CDC and several other major autism research centers have known about this for months and stayed publicly silent, even as the debate over autism and vaccines has reached several decisive moments…”

The sentiments of the Chinese affected by these fraudulent vaccinations are the same heard in the U.S., as reported by BBC:

“‘This is such a huge case and not a single regulatory official has come out to apologize, not a single one has resigned… this system which doesn’t care whether ordinary citizens live or die makes one’s soul tired,” said one [Chinese] user.

“‘… It’s been nearly a year and then they reveal this! Isn’t this genocide? Words cannot express how angry I am!’ said another.”

“According to OSHA head David Michael’s excellent book Doubt is Their Product, Merck knew from their pre-release clinical studies that Vioxx had four times the risk of heart attack as the placebo they used (naproxen)… According to Michaels’ book, ‘scientists at the FDA estimate that Vioxx caused between 88,000 and 139,000 heart attacks, probably 30%-40% of them fatal.’

… So Merck (with foreknowledge) deliberately killed about 40,000 people that were simply taking a pain reliever drug (most weren’t heart patients). That is almost as many deaths as US combat casualties in the Vietnam war. That must make Merck the biggest corporate mass-murderer in history. Where is the outrage?”

Indeed. Crime and Big Pharma are global brothers in arms.

Protect your immune system with food, not pharmaceuticals.