Meningococcal disease, or bacterial meningitis, is a serious infection in the protective membranes (meninges) of the brain and the spinal cord that affects fewer than 1000 people per year in the United States. Tragically, this fast acting illness kills 10 – 15% of those infected. Additional complications can include bloodstream infections (septicemia) that may result in brain damage, learning disabilities, deafness and loss of limbs by amputation. According to The Center for Disease Control (CDC), about 1 in 10 folks have the Neisseria meningitidis bacteria in the back of their throat, but have no symptoms of the disease. These folks are considered carriers. Think twice before you kiss a stranger.

The Neisseria meningitides bacteria is broken down into five strains called A, B, C, W, and Y. Parents who dutifully follow the CDC vaccination rulebook inject their 11 – 12-year-old child with a vaccine that is supposed to protect them from the A, C, W and Y strains. However, it was the B strain that caused meningitis outbreaks at the University of California, San Diego (UCSD) in March of 2013. The same B strain also caused the outbreak at Princeton in November of 2013. During both of these events, there was no FDA approved vaccine for the B strain. But what do you know, just three months before the UCSD outbreak, the European Union (EU) approved Bexsero, the world’s first vaccination for the B strain of Neisseria meningitides, created by pharmaceutical giant Novartis. Follow the timeline: Bexsero is approved in the EU in January 2013; College outbreaks occur in March and November, 2013; And by December 2013, the universities demanded that this new Bexsero vaccine be made available to their students, even though it wasn’t licensed for use in the U.S. Therefore, the students got their shots. Now if we fast forward to January, 2015, the FDA not only approved Bexsero, but recommended it for most individuals between the age of 10 – 25.  Even some U.S. physicians believed this approval was a little too fast and maybe not so safe.  Health Impact News has the details:

“Dr. Mark Sawyer, an infectious disease specialist at Rady Children’s Hospital in San Diego, told reporters… ‘Newer vaccines on the market lack comprehensive evidence on safety and effectiveness, compared with vaccines that have been administered to tens of millions of people over decades.’

[Dr. Sawyer also told reporters] that he did not vaccinate his own daughter because he did not feel that she was at an increased risk.”

But wait, there’s more. Pfizer, another mega pharmaceutical company, was also busy creating and marketing Trumenba, an addtional vaccine for this B strain meningitis. It was reviewed, according to the FDA, “and approved under the FDA’s Breakthrough Therapy designation and Priority Review programs.” This fast track approval for Trumenba took place in October 2014, prior to Bexsero FDA approval. But Trumenba expanded their market share and said it would be good for ages 10 – 25. And when Bexsero was approved in January 2015, Novartis added that demographic of 10 – 25 years of age as well. Guess one has to keep up with the Joneses.

So now, two vaccines exist for this B strain of meningitis. In the U.S., both were allowed to be used before they were licensed. Now, in the UK, these same vaccines are now being marketed for infants. In fact, you can get pre-filled syringes in the UK  ripe and ready for your two month old. But what about the ingredients? Health Impact News has the specifics:

“… The Bexsero vaccination contains 1.5 mg of aluminium, which is a massive 1475 mcg more than the FDA’s “safe” recommended amount… Another interesting fact is that according to the CDC one of the ingredients [that both these vaccines contain]… is E.coli and this was not listed by the manufacturer.”

Health Impact News provided this graphic to prove their point. 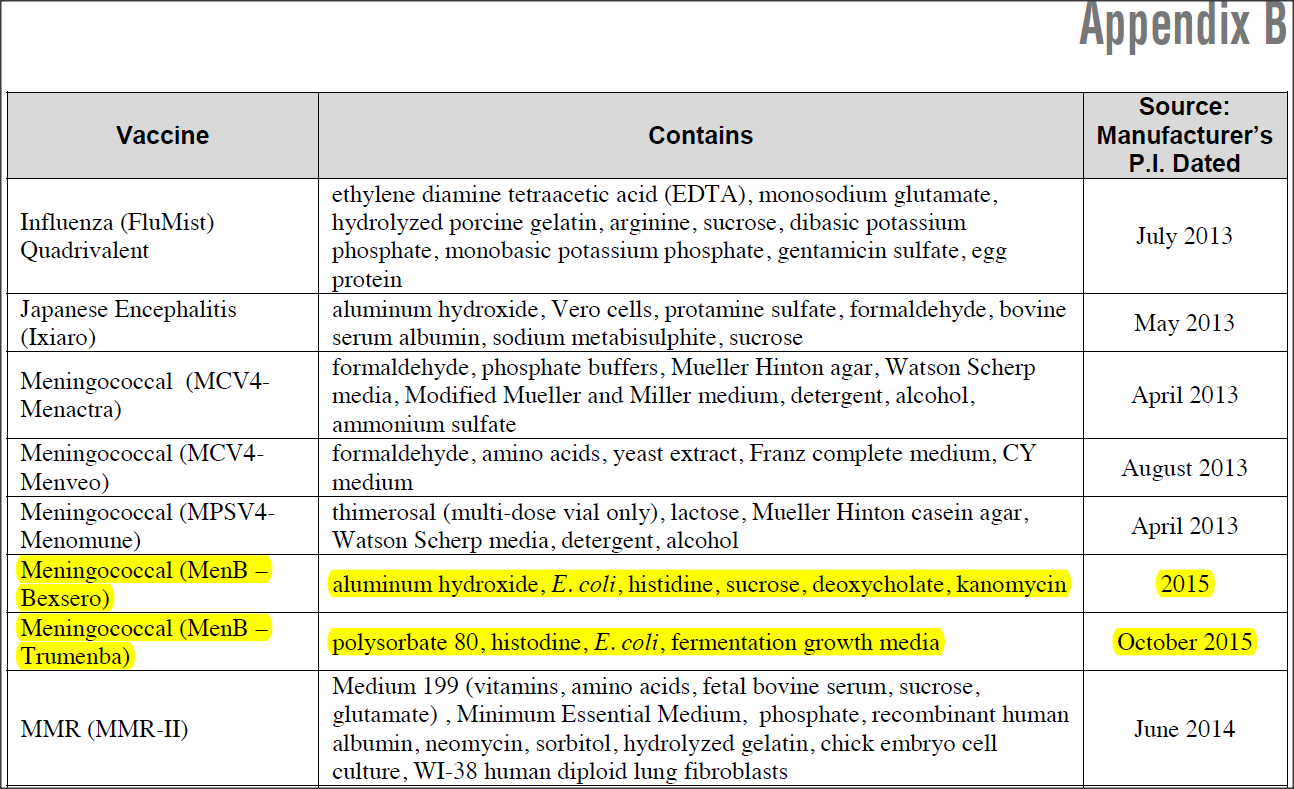 Here is another interesting tidbit from a CDC press conference in November 2013. In her opening remarks, Dr. Amanda Cohn, an expert in meningococcal disease at the CDC, explained why no Neisseria meningitides B strain vaccine existed in America.

“We don’t have a vaccine in the U.S. licensed to protect against serogroup B, which is the cause of the cases at Princeton University and UC Santa Barbara.  And that’s because there’s been challenges making of serogroup B vaccine, because the target serogroup capsule looks like an antigen we actually have in our bodies and so it’s not immunogenic. So we have to find other targets for vaccination.”

Hmm, I’m no expert, but is this one of the reasons they used genetically engineered substances in the B strain vaccine?

Dr. Cohn was also asked, if there is a B strain vaccine available in the UK, why not in the U.S.? Here is a portion of her answer:

Nothing like an outbreak to fast forward FDA approval.

Parents have difficult choices to make. Keeping healthy in a toxic world is not easy, yet we can take comfort in learning the power of food as medicine.