Where are ISIS fighters coming from? 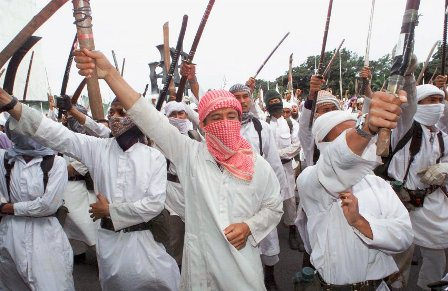 It is estimated that over 27,000 foreign fighters have travelled to Iraq and Syria since fighting broke out in 2011.

While there are no confirmed figures for the official tally, experts predict thatmany are still fighting in the conflict zone – while an estiated 20 to 30 per cent have travelled home.

Between 27,000 and 31,000 people have traveled to Syria and Iraq to join the Islamic State and other violent extremist groups in the region, according to data provided by the Soufan Group.

This is already more than the total who traveled to Afghanistan during its ten-year war.

The Soufan Group said that the increase in fighters shows efforts to contain the flow of foreign recruits have had “limited impact”.

As well as the Islamic State (also known as Daesh, Isil and Isis), which is attracting increasing numbers to its cause, there are several other factions fighting in Iraq and Syria.

The foreign fighters joining these groups are from at least 86 countries – one in six of which have no reported quantity of fighters. 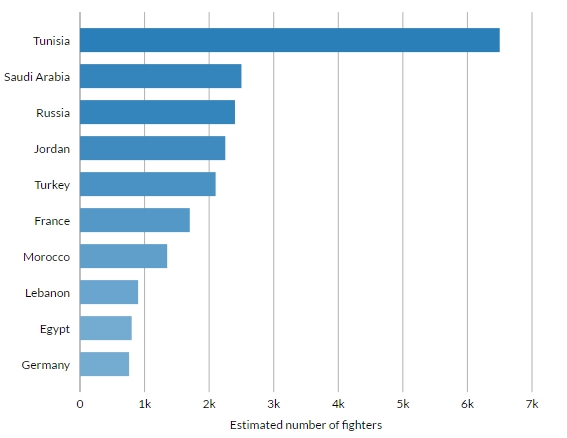 Top 10 countries by foreign fighters in Iraq and Syria

There are approximately 6,000 people from Europe – with the most fighters leaving France, Germany and the UK.

The number of foreign fighters from Western Europe has more than doubled since June 2014, while it has remained relatively flat in other regions such as North America.

The UK has seen an estimated 760 jihadists travel to Syria and Iraq. Some estimates say that half of these have returned to the UK, while more than 50 are reported to have died.

The Asian continent has seen the most citizens travel to Syria and Iraq, with over 14,000 people estimated to be in the conflict zone. 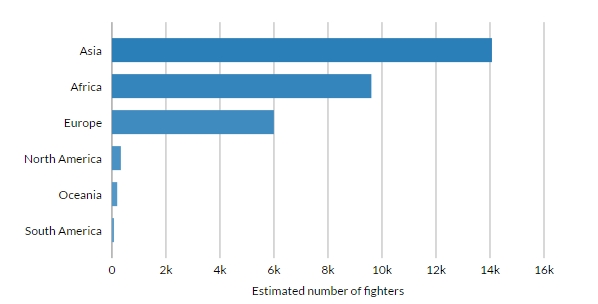 Iraq and Syria: How many fighters are there from each continent?

The countries with the most fighters in the conflict are Tunisia, Saudi Arabia and Russia.

While around 6,500 Tunisians are reported to be fighting in Iraq and Syria, a further 5,000 have been stopped from leaving the country before they could join the fighting.

It can be assumed that the majority of the people who have travelled are with the Islamic State, according to the Soufan Group that collates the figures.

The group said that the figures may include women and children, who usually do not fight in the conflict. There are also unreported numbers of people who have died in or returned from the conflict zone.

While national governments do not know precise counts of their nationals who have gone to fight, estimates have been gathered by the United Nations, the Soufan Group and the International Centre for the Study of Radicalisation.

The Soufan Group published a paper on foreign fighters in June 2014, when 12,000 people had left – half the number in the current estimates.

In it, the group concluded that the Syrian war is “likely to be an incubator for a new generation of terrorists”, and warned that “the world will face years of terrorism as a result”.

In its December 2015 report, the group added: “The motivation for people to join violent extremist groups in Syria and Iraq remains more personal than political”.