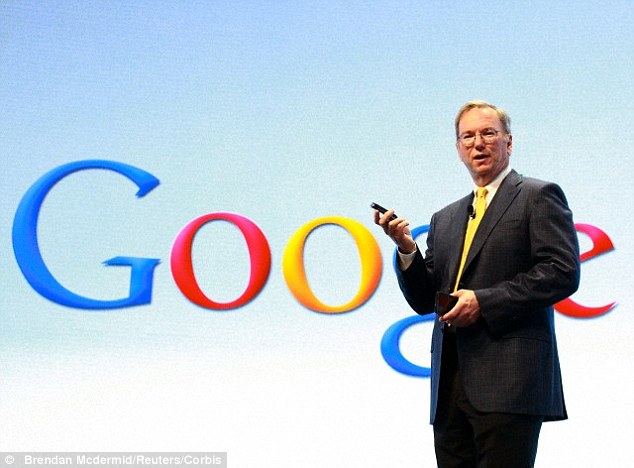 Advances in A.I. have enabled researchers to establish a cause and effect relationship between data by weeding through vast amounts of information, according Schmidt. “AI will play this role to navigate through this and help us,” he added.(1)

These technological breakthroughs can help companies design new, personalized systems. During a conference in New York, Schmidt said he would like to see a day of “Eric and Not-Eric,” where Eric represents the flesh-and-blood Schmidt and non-Eric represents “this digital thing that helps me.”(1)

A.I. shaping the marketplace of ideas

Google has been a foremost champion of A.I. It uses the technology to help budding businesses, including self-driving cars, and to better existing technologies, like the Android phone’s operating system and Google’s search engine.

Nevertheless, Google is no longer the only player in town when it comes to A.I. Competitors such as Facebook, Microsoft and International Business Machines are jumping onboard the A.I. bandwagon.

“The power of AI technology is it can solve problems that scale to the whole planet,” Mike Schroepfer, Facebook’s chief technology officer, stated at the event.(1)

A.I. is becoming so prevalent and paramount that companies ought to agree on standardized approaches to A.I. by applying analogous instruments and publishing their research for academic review, noted Schmidt.

“Every single advance has occurred because smart people got in a room and eventually they standardized approaches,” Schmidt said. “The promise of this is so profound that we — Alphabet, Google, whatever our name is at the moment — are working incredibly hard to advance these platforms.”(1)

The field of AI feels like the early days of the PC and mobile phone industries, according to Schmidt. There is “a small set of people that understand collectively that when we put all this stuff together we can build platforms that can change the world,'” he added.(1)

World’s biggest problems too large even for A.I.

A.I. has been paved with grand promises without underlining all the risks. No one at the conference bothered to question whether A.I. should solve the world’s problems, even though thinking machines are themselves an existential threat.

In fact, in 2015, over 1,000 scientists – including famed physicist Stephen Hawking and SpaceX CEO Elon Musk – signed an open letter warning about a “military artificial intelligence arms race” and called for a ban on “offensive autonomous weapons”.

Furthermore, while A.I. could help officials make policy decisions, it should not be used to determine how we ought to act. This is because the behavior of a physical system can’t be reduced analytically to simple rules. Even weather forecasts aren’t 100 percent accurate. As Rick Robinson, IT Director for Smart Data and Technology for Amey, explains:

Simulations are approximations to real-world systems, and their accuracy is restricted by the degree to which digital data can be used to represent a non-digital world. For this reason, conclusions and predictions drawn from simulations are usually “average” or “probable” outcomes for the system as a whole, not precise predictions of the behavior of the system or any individual element of it.(3)

The crux of the A.I. debate can be summarized with a single question: Do we really want to live in a world where wars, policies and care are dictated by artifacts devoid of empathy, compassion and understanding? Whatever the answer may be, one thing remains certain: It definitely won’t be determined by an A.I. system.