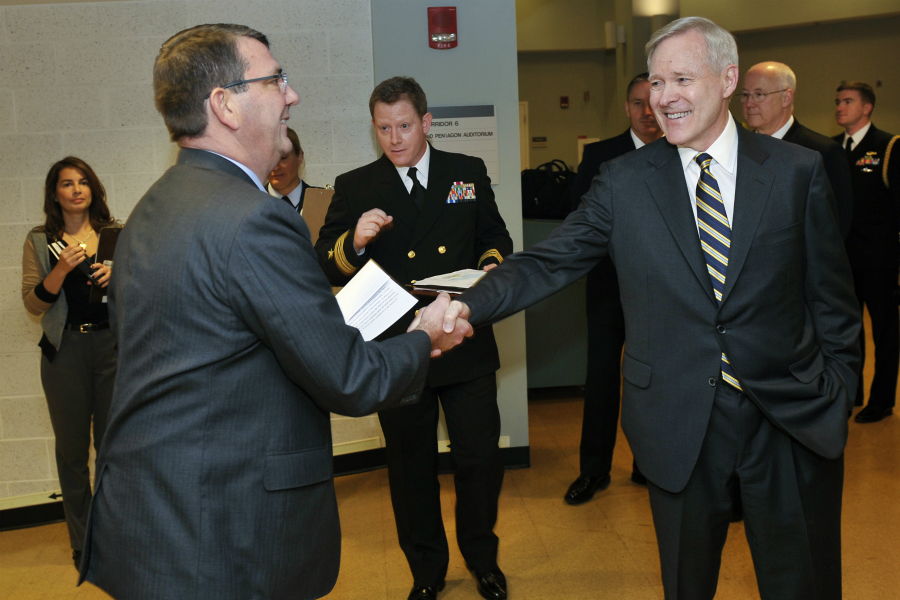 (NationalSecurity.news) It’s not supposed to be this way, but a number of service chiefs and some members of Congress are having unusually public spats with Defense Secretary Ashton Carter over budgeting and spending priorities regarding current and future weapons systems.

As reported by Politico, the issues largely revolve around what kind of force should be built for the future – namely, should the force resemble something more prepared to battle unconventional and asymmetric threats like the Islamic State and the Taliban, or more conventional forces that Russia and China would likely field.

Carter’s vision is to utilize much of the approximately $580 billion budget request to lock in the Obama administration’s priorities including the investment in more advanced systems like next-gen fighter and submarines, as well as in-demand skillsets like cyberwar.

But those priorities have put him at loggerheads with some of the service branch chiefs, including having to deal with open skepticism from the Navy and Army leaders “who have disagreed with their boss in recent days over key aspects of the administration’s plans,” Politico noted. “One admiral even mocked critics of a warship program that Carter is trying to scale back.”

For instance, Navy Secretary Ray Mabus wants to spend more on a smaller warship designed to operate close to shore, even though it has faced criticism for a substantial lack of firepower, but Carter does not. Also, the president’s selection for Army secretary, Eric Fanning, has said he has concerns about the White House’s plans to free up the budget for other items by cutting Army troops.

In recent days Fanning told members of the Senate Armed Services Committee he frets about how the administration’s plan to cut 40,000 soldiers from the active-duty Army to 450,000 will impact it’s ability to operate.

That reduced troop level is “preventing us from doing everything we want to do to the Army to … make it readier,” he said. “Two years ago when we targeted 450 [thousand], we didn’t have ISIL, we didn’t have Russia.”

The disagreements over budget priorities have spilled out into the public realm, which is unusual, said Politico. Defense budget expert Mackenzie Eaglen told the news site that Carter is “in a semi-open war” with Mabus in particular.

The resistance comes from powerful forces in the military, in the defense industry and on Capitol Hill that may see little to lose in bucking the Pentagon’s boss in the final year of the Obama administration.

“The budget the secretary will submit invests in the kinds of advanced capabilities our warfighters deserve and our nation needs,” Cook said, adding that Carter “looks forward to making the case for this budget to members of Congress and to taxpayers across the country.”

For Mabus, the smaller, less lethal Littoral Combat Ship is more of a priority, and he wants to build a lot of them. He and other Navy leaders voiced their priorities at a military symposium earlier this month to defend the ship – the same one that Carter wants to trim to free up money for destroyers, munitions, upgrading subs and the F/A-18 and F-35 warplanes.

The spat has also spurred discussion about U.S. Navy “presence” around the globe – namely, that presence without lethality is the same as having no real presence at all.

And that presence is what keeps U.S. allies feeling secure. A lack of it, especially in Asia these days, where China’s assertiveness is growing, makes allies uneasy and skeptical of overall U.S. commitments to the region.

The LCS, built by contractors Lockheed Martin and Austal USA, is designed to provide “presence,” allowing the Navy to patrol coastal waters all over the world, but the ship has faced criticisms for its inability to survive certain combat situations.

In a memo to Mabus last month, Carter ordered him to cut purchases of the LCS from 52 to 40, saying the Navy secretary was more focused on “quantity” over “lethality.”

“I have made clear in our discussions, in my budgetary guidance, and in public remarks that our military is first and foremost a warfighting force, and while we seek to deter wars, we must also be prepared to fight and win them,” Carter wrote in his memo. “This means that overall, the Navy’s strategic future requires focusing more on posture, not only on presence, and more on new capabilities, not only ship numbers.”