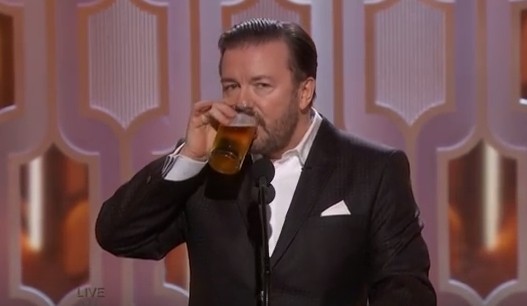 In contrast to the fans, the stars themselves are rarely offended. In fact, most of them seem to love being the target of Ricky’s insults, because it brings them attention. Of course, there’s nothing new about that.

For the past 50-plus years, the comedian and actor Don Rickles has made a career out of insulting people – especially his peers – earning him the sarcastic nickname “Mr. Warmth.”

And it has been over a century since the Friar’s Club invented the celebrity “roast,” described as a “no-holds barred affair in which entertainment legends fire their sharpest comic barbs at a guest of honor.” The Club’s website gives the history:

“A New York Tribune headline from 1910 reads, ‘FRIARS KID ME. HARRIS: Veteran Theatrical Manager Butt of Jokes at Dinner.’ The dinners bloomed into an exclusive event, and the first formal ‘Roast’ went down in 1949 with Maurice Chevalier as the guest of honor. It was obscene, unedited, outrageous and sidesplitting.”(2)

In the 1970s, the “Dean Martin Celebrity Roast” adapted the Friars Club tradition for a mainstream, prime-time audience, featuring a who’s who of classic showbiz stars.(3)

Today, Comedy Central brings the celebrity roast to a new generation, with celebrities like Charlie Sheen, David Hasselhoff, Justin Bieber, James Franco, Joan Rivers and many others freely choosing to be verbally abused by other celebs. Unlike the Dean Martin version, which was sanitized for the television audience, cable TV has no such restrictions, so the Comedy Central roasters are able to engage in unbridled vulgarity and tastelessness. For example, when Rosanne was the guest of honor, the comedian Jeff Ross said, “You know what, normally when I roast a pig it has an apple in its mouth,” and then he handed her an apple.(4)