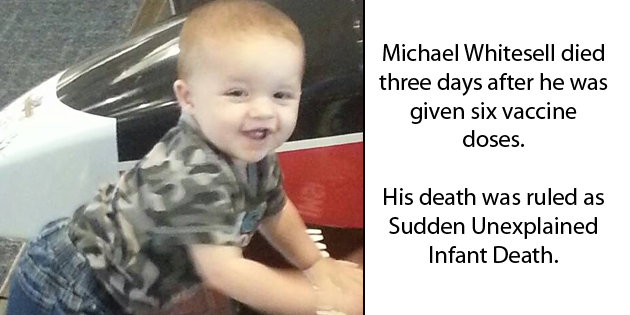 *The following article was written by Augustina Ursino and originally appeared on Vactruth.

We wanted to update our readers on a story we recently published, titled Indiana Baby Dies in His Sleep Days after Receiving 6 Vaccine Doses. Autopsy results have revealed baby Michael Whitesell’s liver and vascular systems were congested when he passed away. The coroner ruled one year-old Michael’s death as Sudden Unexplained Infant Death, due to natural causes, and the specific vaccines were not listed on the autopsy report.

At the age of one, on October 19, 2015, Michael Whitesell was taken in for the routine 12-month well baby check-up, where he was injected with the MMR, varicella, hepatitis A, and flu vaccines. This was six vaccine doses given to him, in four injections. He let out a scream his parents had never heard before.

Three days later, he had a fever and was given Tylenol. He went to bed that night and died in his sleep, sometime the following morning. After he was found, his father Thomas performed CPR on him, until EMS showed up and took over. Once investigators showed up, they tried to revive Michael, but it was accepted he was already gone and resuscitation efforts ceased.

Investigators left baby Michael on the floor, on his back, with his little arms out to his side, turning more blue and darker by the minute, while waiting more than two hours for the coroner to show up. Investigators didn’t even cover up baby Michael with a sheet.

Those surrounding the scene were walking over Michael’s uncovered body. The doorway where Michael lay connected the children’s bedroom to the living room. His three year-old brother Keegan didn’t know what was going on; he offered Michael some goldfish crackers in his mouth, because he thought his brother was hungry. He knew something wasn’t right but didn’t understand what had happened.

The family tried to keep Keegan outside, but it was so cold that morning and they had to keep going in and out of the house. The family was so distraught looking at Michael, while hoping he would just start breathing again.

Michael’s grandmother recalls no one saying they couldn’t cover him up themselves, but they were just mad, shocked and sad, dealing with so many emotions at one time. They didn’t know if they were allowed to cover his body, thinking the investigators still needed to take pictures. You would think the investigators would cover up Michael without being asked. Michael’s family didn’t want Keegan to remember his brother this way.

While this was happening, the Indiana Department of Child Services (DCS) was notified. Michael’s parents, Thomas and Brittney Whitesell, were investigated; then three year-old Keegan was removed from the home and placed with Brittney’s grandmother, who lived about 25 miles away, in a retirement home with two ladies.

Thomas and Brittney were told Keegan would be returned once the autopsy results came back, to prove they didn’t hurt Michael. They were treated like criminals and the vaccines were never looked at as a cause of death. Thomas and Brittney were fingerprinted, had background checks done on them, were tested for drug use on the spot, and they came back clean. It was so hard for them to have Keegan taken away like this, after just losing Michael.

The autopsy results revealed Michael was not abused at all. The autopsy report showed Michael Whitesell’s liver and vascular system were congested. The coroner ruled one year-old Michael’s cause of death as Sudden Unexplained Infant Death, due to natural causes, and the specific vaccines he had received were not listed on the report.

The medical examiner confirmed Michael had vascular congestion in his brain, thymus, heart, lungs, liver, spleen, kidneys, adrenals, urinary bladder, gastrointestinal tract, pancreas and thyroid. Petechiae of the thymus and lungs were noted, along with pulmonary and visceral congestion. The toxicology report came back negative and mentioned his urine was positive for glucose.

To read the rest of this report, click here.