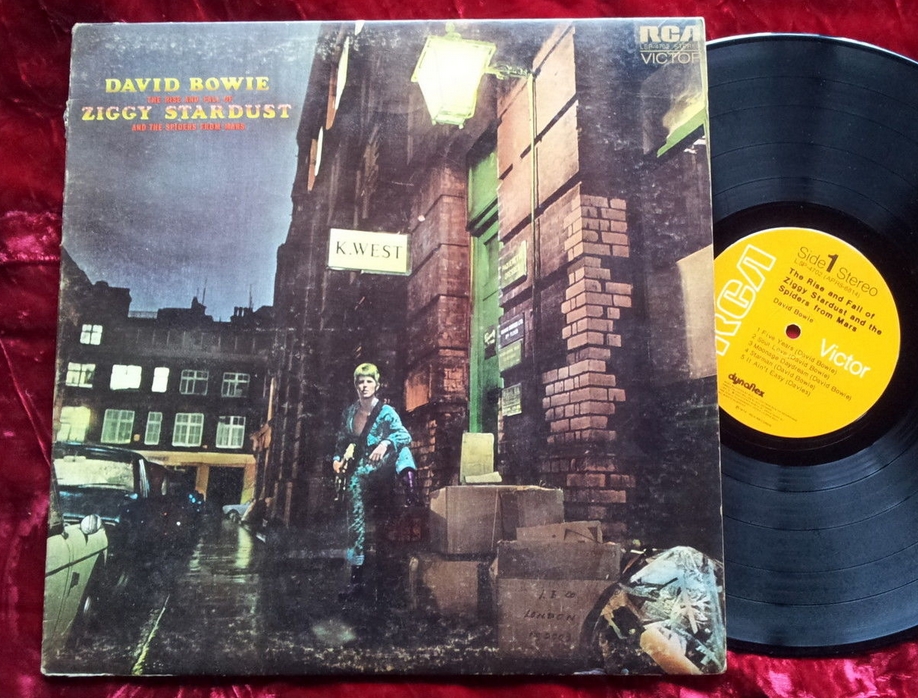 From the Rolling Stones to Paul McCartney, from Madonna to Kanye West, the death of David Bowie on Sunday – reportedly succumbing to liver cancer – has unleashed a torrent of tributes from the world of music, cinema, fashion and far beyond, demonstrating the massive influence he had on popular culture.[1][2]

Throngs of fans have gathered in his London birthplace, laying flowers and candles singing along with his song. Crowds have also been present outside his New York home and in Berlin where he lived in the late 1970s.[3]

From his first recordings to his last – and all the films, videos, and artistic expressions that were sandwiched in between – Bowie never ceased trying new things, and was thus never boring. He managed to achieve the uncommon feat of being very weird and very popular, resulting in a string of hit songs, including “Space Oddity” (featuring his landmark Ziggy Stardust character), “Fame” (his first #1 hit, co-written with John Lennon), “Changes,” “Suffragette City” and “Rebel Rebel,” among others.

After those early hits, he of course changed gears completely, immersing himself in the German electronic scene, making a series of records with like-minded experimenter Brian Eno, resulting in mostly uncommercial and spacey soundscapes, save for the classic track “Heroes.” Then, in the 1980s, he emerged more popular than ever with some of the best and smartest dance music of the decade. In the 1990s, his popularity waned again but his influence remained, while most grunge fans had no idea that Nirvana’s “The Man Who Sold the World” was actually written and recorded by Bowie some 25 years prior. His final album, Blackstar, released just two days before his death, has been described as “warped showtunes, skronking industrial rock, soulful balladeering, airy folk-pop, even hip-hop” – and declared to be his “best anti-pop masterpiece since the Seventies” by Rolling Stone.[4]

His gender-bending contributions to music and fashion made stars like Madonna, Lady Gaga, Boy George and Marilyn Manson possible, and have had an obviously lasting effect on contemporary sexual mores.

In the original publication of its obituary, the New York Times called him “a chameleon in music, art and fashion.”[5][6] So perhaps it’s fitting to sum up with a tribute from the Berkeley-based herpetologist Owen Maercks, who is both an expert on reptiles and a big fan of David Bowie:

1972. I was a high school senior, yeah, but what I really was was an embryonic cultural analyst and archaeologist of the sonic present and past. In my nearly daily pouring through the cut out bins and DJ promo discount racks, I came across this beautiful and mysterious record called The Rise and Fall of Ziggy Stardust and the Spiders From Mars.

I had no info, and no idea, but I was drawn to that cover in a very special way, and paid my few dollars and took home this alien-looking thing. Truth be told, I didn’t quite hear it on the first play. But on the second, and third, and fourth, it revealed itself like an oldtime burlesque stripper, slowly, tauntingly, and in layers. Suddenly, I was hooked, and not just for this one record, but for the long haul, back, back to Hunky Dory, back through the Mercury discs, and then the London disc, and forward, truly and completely forward, through the seedy sci-fi, and the reinvention of a future music, and the re-reinvention, and on and on.

And through his own promotion of other Heroes of mine, Lou, and Iggy, and new Heroes, like Klaus, and on and on. He gave, and he gave, and he pushed me to new ideas and perceptions, and he forever changed my attitudes and notions, and not just about music. Just this morning my wife and I were discussing how he still could produce material of such beauty and power, and how age didn’t seem to matter, and how strong and healthy he sounded even now.

And now, it is done. He is gone. Now he is jamming good with Weird and Gilly. And Lou. And Andy. And Mick. And Nico. Tonight the world is a dimmer place, with less Sound, and Vision.[7]