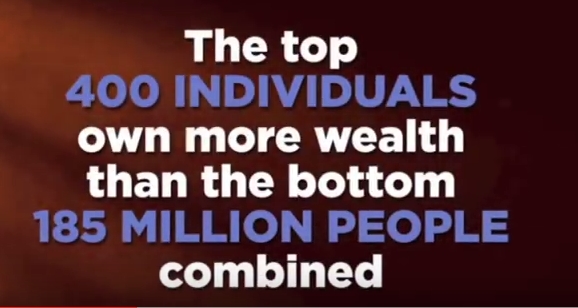 A very wealthy businessman, speaking of others like himself, once said to Ralph Nader: “Ralph, we all know how to make a lot of money but we don’t have a clue as to what to do with it, including me.”[1]

Indeed, what to do with all their cash has become an increasing problem for the filthy rich. In America, there are 400 people who each have more money than does the bottom 185 million people combined. In other words, if America’s poorest 185 million people combined all their money together, they would still have less money than Bill Gates. Or Mark Zuckerberg. Or any of the other billionaires in the Top 400.

One of the first Americans who faced the problem of having way too much money was Andrew Carnegie, who built the first billion-dollar corporation by feeding off government military contracts, and kept his costs down by having his employees massacred when they demanded a raise or better working conditions. (Carnegie’s fellow billionaire John D. Rockefeller also used lethal force against his own employees.)[2]

Carnegie did, however, create some noble things with his money, including the Carnegie Institution for Science, the Carnegie Endowment for International Peace, Carnegie Hall, and over 2,500 free libraries in communities throughout the country.

Like Carnegie, Mark Zuckerberg got rich off the nanny state. Facebook – an idea which he allegedly got from someone else – obviously couldn’t exist without the internet, which was developed by the federal government over many decades, with taxpayer dollars. So when Zuckerberg recently announced that he and his wife would eventually give 99 percent of their Facebook shares away, some astute commentators observed that it might be appropriate to just divide it equally among the American people.

With only 46 million dollars in net worth, Zuckerberg is just half as rich as Bill Gates, who is the world’s wealthiest person. Gates, it will be recalled, started an initiative with Warren E. Buffett to get wealthy individuals and their families to give away more than half of their wealth to charities during their lifetimes or after. For his part, Gates has pledged to give away at least 95 percent of his wealth, which will relegate him to the category of a mere millionaire.[3]

Of course, it should probably be noted that part of Gates’ philanthropy involves his plan for depopulating the world. As a leading conspiracy investigator[4] remarked: “When it comes to Bill Gates and his dehumanization agenda, it’s hard to even know where to begin: GMOs? Vaccines? Chemtrails? Genetically engineered mosquitoes? Bill Gates has even funded a technology that can sterilize a human man by blasting his scrotum with a high-frequency ultrasound device … Microsoft is now in the pharmaceutical business. And their focus is gene-targeting technology that could theoretically be used to develop race-specific bioweapons that, for example, kill only people of a certain color. Then again, Bill Gates’ depopulation agenda doesn’t seem to be race specific … it’s more like ‘Kill all humans’ much like the Terminator in the first film.”[5]

As for Zuckerberg and his philanthopic gift, a scholar at the Institute for Policy Studies notes, “the reality is that he is not in fact giving away his money. Zuckerberg will shift his assets over his lifetime to a limited liability corporation which … serves as an effective tax dodge for the assets he is transferring to it.”[6]

As any accountant will tell you, getting a tax break is the financial equivalent of getting a welfare check. From a strictly bookkeeping perspective, then, Zuckerberg is more of a welfare recipient than a philanthropist.