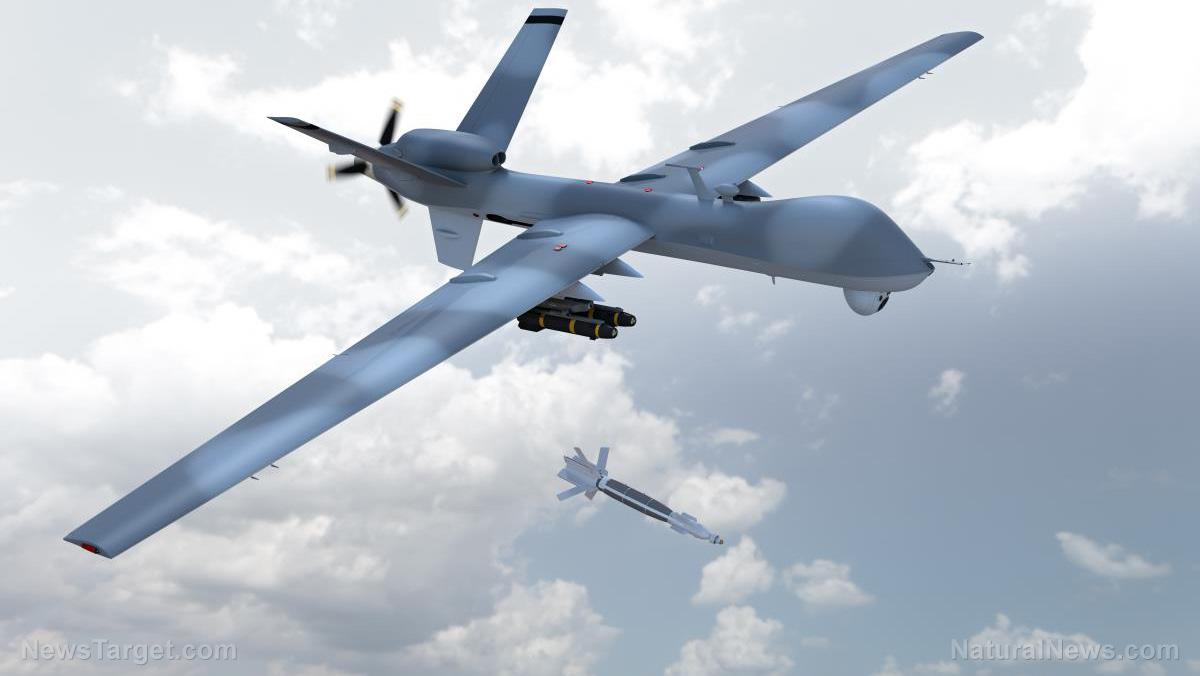 First, it was the “War on Terror,” where every American was supposed to be terrified of those “evil do’ers” that took over airplanes and turned them into weapons of mass destruction, even though there’s not one single airport security video of any of the supposed 19 terrorists of 9/11. Now comes the “War on Covid,” where every person in the world is supposed to be terrified of the China flu to the extent that we all beg for blood-clotting vaccines to stave off our death by virus with death by spike protein invasion. Now, the hysteria is spreading, with the injected calling any sane person who rejects death by vaccination a “bio-terrorist” who wants to spread Covid and kill off the world. Burn them alive! Drop bombs on them all using drones!

Today’s “War on Terror” is the Anti-Vax War

Want to fight for your country and the republic? Never accept vaccines that push billions of toxic spike proteins into your organs and blood vessels. It’s the “sure shot” way of losing all of your rights and ‘privileges’ as your health will quickly decline, as will your mental capacity to understand what is happening to you. This is the case with the talking heads at MSNBC, who are calling for drone strikes on anyone who is exercising their God-given right to not have Covid ‘heart spike’ injections.

Everyone must clog their brain with billions of protein particles that mimic viruses, or face being wiped off the face of the Earth, starting now, says Frank Schaeffer, a deranged, clot-shot-lover and guest on MSNBC.

When you get shot up with billions of blood-clogging viral fragments and wear an oxygen-depriving mask most of every day, you quickly lose your patience for people who function in a normal, civilized, healthy manner. The bio-terrorist pundits and their guests need to be “treated as such” and locked up until they can prove they are sane. Death threats are no joke, and right now the vaccine industry and mass media talking heads want to kill Joe Rogan for using vitamins and ivermectin (anti-parasite medicine) to cure his case of Covid.

“They should be treated as such. Drone strikes on selected worst offender pod-casters anyone?” decries the violent antagonist Schaeffer (he’s talking about the “Joe Rogan Experience” podcast here). To MSNBC fans the new Taliban are “anti-vaxxers” who are now the “American Taliban” and who are going around killing millions of people on purpose with their China Flu germs.

So now, if you don’t get shot up with billions of blood-clogging prions, you’re worse than an Islamic terrorist. Drone bomb them all, right? Everyone, run for your lives, the MSNBC goons are planning to drone bomb the unvaccinated in America.

“We have a situation in Texas right now tonight where the American Taliban, because that’s what it is — there’s not an American evangelical right-wing movement — there is an American Taliban — is weirdly similar in so many ways to the Middle Eastern Islamist terrorists,” the MSNBC goon declares.

Covid vaccines, like all other vaccines, are supposed to keep you from getting a virus, but they don’t. Vaccines are supposed to be a preventative measure, and the benefit is supposed to far outweigh the risk, but it doesn’t. Did you know chemotherapy only saves four percent of its victims, on average? That’s because chemotherapy is poisonous and causes more cancer to develop inside your body, leading to organ failure, just like Covid vaccines cause blood clots and myocarditis by clogging blood vessels and vital organs with billions of toxic, virus-mimicking spike proteins.

The big pharma push for clot shots is all about the elimination of freedom, personal medical choice and good health. Vaccinated people are finding out fast that getting vaccinated for Covid doesn’t help them have freedoms and privileges, it takes them all away.

So who’s ready for some pre-cancer-chemotherapy that fuels and spreads cancer growth? If you don’t get it, then the goons at the CDC and fake news will demand you lose all rights as an American. Pre-chemo doesn’t work, by the way, and neither do the China flu clot shots.

The Covid vaccines don’t stop you from catching it or spreading it. Even if they save you from a deadly case of China flu, the effect wears off after a couple months, so rush out and get those boosters that clog your blood even more, while you lose all of your freedoms when your body collapses from lack of proper oxygen and nutrient flow.

Tune your truth news dial to Pandemic.news for updates on the war against dirty vaccines and socialism, and how to keep your family happy, healthy and safe.