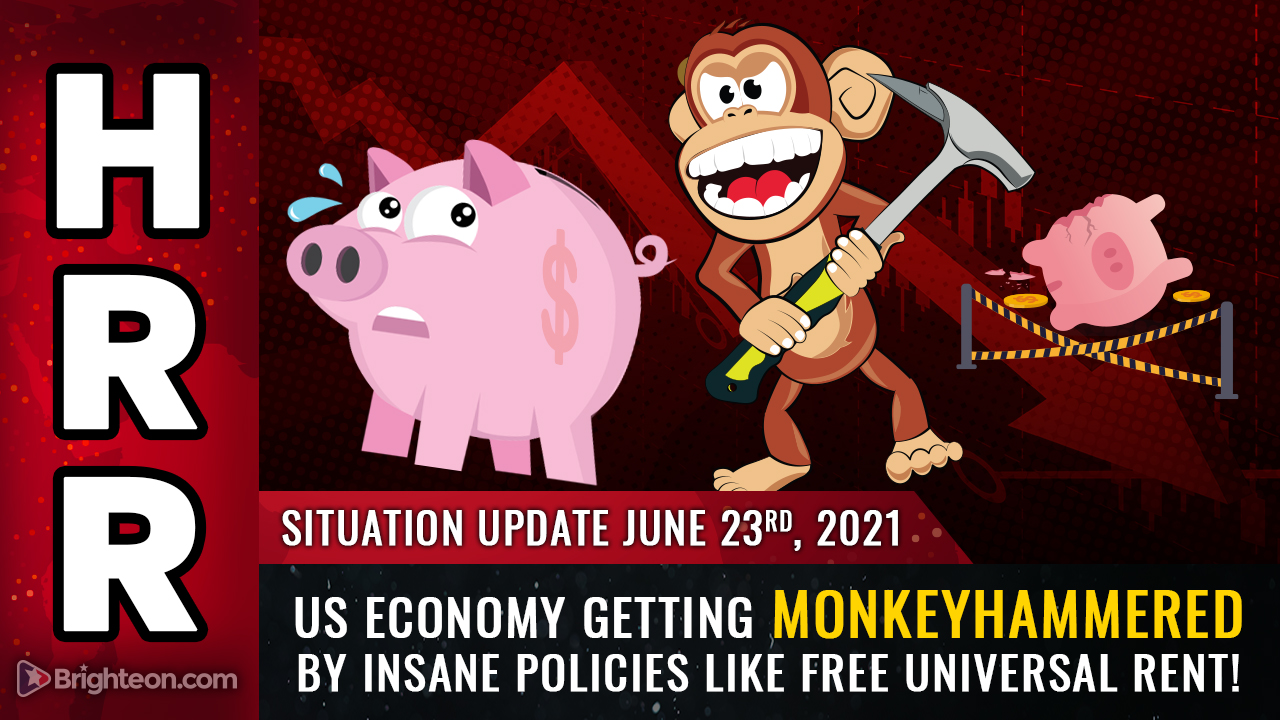 If you were looking for evidence that the end of the US dollar debt bomb is near, look no further than California, where federal tax dollars will now be used to pay “universal rent” for all Californians who are behind on their rent payments. Gov. Newsom announced the policy two days ago, essentially proclaiming that anyone in California who actually bothers to pay their rent is a fool, since the government is going to cover that from this day forward.

And that means the $5.2 billion is going to absolutely explode to tens of billions of dollars annually. In addition, rent fraud will explode at the same time as people realize they can set up rental contracts with friends or neighbors, report the rent as “unpaid” and have government send them fat checks for years to come.

The entire concept of government paying off private rent is disastrous to free market principles and the very idea of liberty. If government starts paying off everybody’s rent, then government can also decide which citizens get excluded from such “benefits,” or which landlords are unworthy of receiving rent payments from the government. Those decisions will, of course, become highly politicized and weaponized against political opponents of the regime in power.

In addition to free rent, Californians also receive free covid bailout “stimulus” money, free health care, food stamps and a vast assortment of other government handouts. Absurdly, these people are all encouraged to not work and stay home to collect free handouts instead.

Both the government of California and most of its left-leaning residents now believe that entire economies can somehow continue to function when no one works but everyone is handed free money by a bankrupt government. These policies will, of course, end catastrophically, with a near-total collapse of the California economy once the dollar debt bomb implodes (which may only be months or years away).

The reckless bureaucrats and politicians that determine America’s economic policies have crossed the threshold into full-blown Idiocracy. Why should anyone ever have to work, they proclaim, if the government can just create endless free money and hand it out to their loyal voters?

Why should anyone have to produce anything when much of the GDP can be achieved by the government buying overpriced vaccines and medications from Big Pharma, claiming the mass drugging of the people is a sure sign of “productivity?”

Why should anyone in America bother to start a business, work a job or save money when the government stands ready to hand them endless bailout checks while shutting down local economies due to “covid lockdowns?”

Consumerism has become the dominant force in the economy, with fewer and fewer people producing anything of value.

It doesn’t take a genius to figure out where this all ends. It ends in catastrophic collapse of the dollar, which is being printed into oblivion at a truly frightening pace. Much like a BMX cyclist barreling down the side of a mountain at breakneck speed — while wearing blinders — the U.S. debt bomb is fast approaching detonation. The day isn’t far off when we will all wake up and hear the news that our bank accounts are frozen, ATMs are disabled, US Treasuries are being confiscated and the US government has declared a national emergency, no doubt blaming it on “Russian hackers” or whatever convenient scapegoat they think the masses will swallow.

From that day forward, dollars will be virtually worthless, and those who can will shift their local economic activity to silver coinage or barter items. Everybody needs to eat, after all, and the wise have already stockpiled 22LR ammo, “junk” silver coins, gasoline, garden seeds or other items that have universal value in a collapsed economy. Those who were too oblivious to bother prepping can try to sell their bodies, should they have a body that anyone else might value for their own perverted reasons.

As the insanity spreads, these disastrous  “free rent” policies of California may expand to the entire country, with the US Treasury taking “helicopter money” to a whole new level of insanity in the form of cash injections into every transaction they can think of. Before long, government will pay everybody’s rent across the country. Government will drop free stimulus cards (filled with $10,000 credits) into every mailbox across America. They may even start refunding federal income taxes from previous years — anything it takes to mainline more fiat currency into the system to try to keep the economic from suffering a total collapse.

And yes, hyperinflation will accelerate because of all the money printing. Prices of nearly everything will continue to rapidly escalate. The poor will be priced out of basic necessities such as food, housing and even basic clothing needs. In a hyperinflation scenario, only the rich get richer while everybody else gets monkeyhammered into oblivion.

Today’s Situation Update podcast covers all this in excruciating detail, complete with my attempted impersonation of a crazed, violent monkey hammering away at the economy:

Catch a new podcast each weekday at: