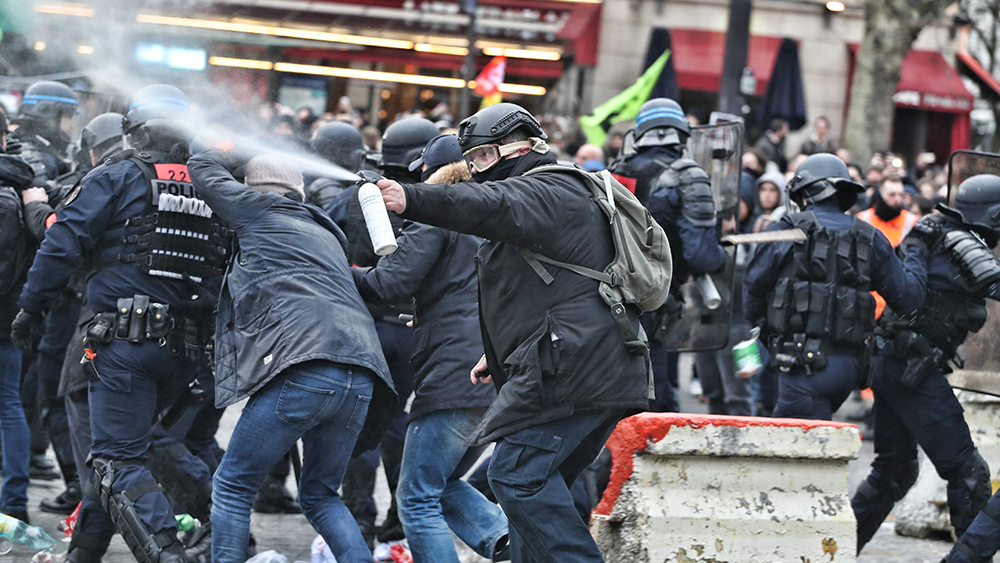 In their effort to create an autonomous zone in Portland, Antifa rioters have instead turned the city into a war zone, as demonstrators clashed with police on the evening of June 25 and well into the early morning of June 26.

The morning and afternoon demonstrations were regarded as generally peaceful, and were conducted to commemorate the one month anniversary of the death of George Floyd. As evening rolled around, however, the peaceful protesters were replaced with violent Antifa rioters.

Portland police: Rioters “most aggressive and violent” they have been since riots began

By 10:30 p.m., at least two hundred rioters started gathering outside the Portland Police Bureau’s (PPB) North Precinct in the Northeast Portland neighborhood, where some called for an all-night occupation of the area. The demonstrations blocked traffic from coming into or out of the area, and it even forced PPB officers to barricade themselves inside the precinct, where several of them in riot gear went up to the roof and looked onto the crowd.

As this was happening, the rioters attempted to set up an autonomous zone in the area by blockading streets with barricades and stolen property. They also vandalized the precinct’s walls and spray-painted nearby security cameras, blocking the cameras’ ability to record the evening’s events and identify the criminals. Some of the barricades were properly set up by 12:30 a.m. on Friday, June 26.

Elsewhere in the area, the rioters started even more fires, vandalized and looted buildings and one group even broke into a bank. (Related: Rioters in Portland TEAR DOWN statue of Founding Father George Washington.)

At around 1 a.m., the PPB called the riot an “unlawful assembly.” The crowd outside the precinct responded with shouts, chants and strobe lights. Twenty minutes later, the police began attempting to disperse the rioters using “crowd control munitions.” These weapons include impact munitions and a type of tear gas known as CS gas. However, the rioters fought back. Several of the militants had paintball guns, which they then shot at the riot cops to obscure their vision. Other rioters hurled projectiles, such as glass bottles and fireworks.

At around 1:40 a.m., the PPB said that a mortar was launched onto the precinct’s roof. At 2:15 a.m., the rioters began trying to set fire to the precinct by setting a nearby dumpster on fire. Police said that fires were also lit in nearby buildings.

Portland Fire is putting out hot spots of trash fires at NE Killingsworth & MLK outside the PPB North Precinct where protests broke out overnight. pic.twitter.com/L9FT8GfbEl

By 3:30 a.m., a majority of the rioters had finally dispersed, with their second attempt to set up an autonomous zone ending up in another failure.

Several police officers were lightly injured, and one required hospitalization, but the PPB said is expected to recover. The police said in a statement that this was the most “aggressive and violent” riot they have seen, at least four people have been arrested and that they have secured businesses in the area that were vandalized and looted.

The Portland Business Alliance (PBA) believes that the Downtown Portland neighborhood alone has lost more than $23 million since the beginning of the riots, around $4 million from property damage and $19 million in lost revenue. This number comes from a survey they conducted with several business owners in Portland’s downtown area.

According to Amy Lewin, the PBA’s Vice President of Strategic Communications, their survey provides the city with a “snapshot and narrative of the economic damage.”

Watchworks Incorporated, one of the downtown businesses affected by the rioting, had their windows broken and their inventory looted. Company president Alex Hofberg said people made off with watches and jewelry, and the company is still attempting to assess how much it will cost them to rebuild and replace everything. He believes the riot has cost their business around $300,000 in property damage alone.

Nearby, the Persian House Restaurant, owned by Iranian immigrant Sara Houranpay and her family, said that several pieces of expensive Persian art were either stolen or damaged, and it will take them very long to rebuild.

“Oftentimes people say, is the insurance going to cover this?” said Houranpay. “Insurance companies don’t come to you the day after and hand you a check.”

It has been a month since Antifa began their engineered rioting over the death of George Floyd, and the chaos isn’t going to end anytime soon. Keep an eye on their latest movements at AntifaWatch.news.