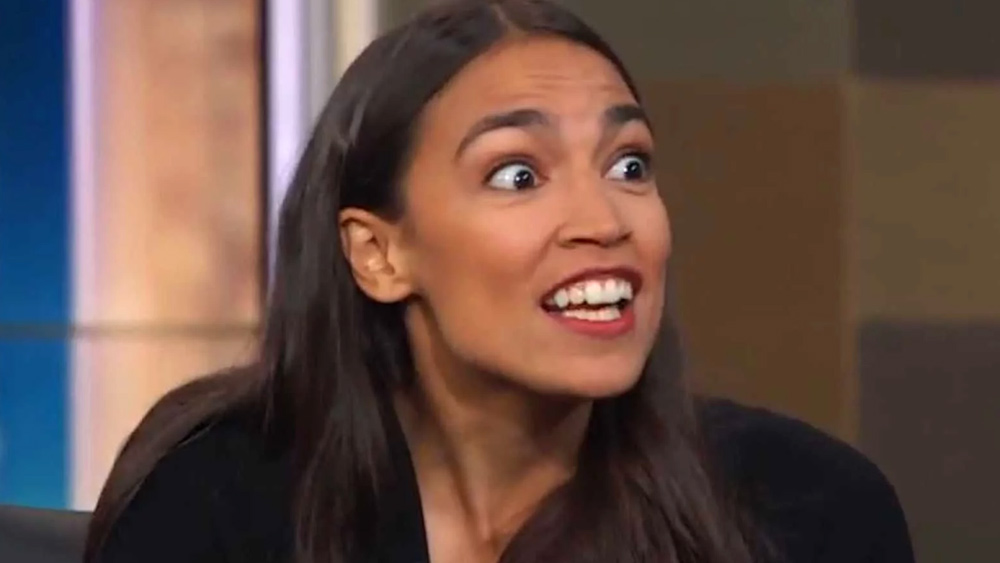 America’s dumbest socialist is back on social media spewing sexist, pseudoscientific tripe in a feeble attempt at sounding smart, while also supposedly defending the so-called “right” of women to murder their unborn children through abortion and infanticide.

According to the wine-damaged brain of Alexandria Ocasio-Cortez (AOC), getting pregnant is somehow the same thing as having an abnormal menstrual cycle – and anyone who disagrees with her on this is apparently a man who doesn’t “know the first thing about a woman’s body outside of the things [he wants] from it.”

AOC’s latest ignorant statements – which, of course, are a perfect match for Twitter where she shared them – come in response to Georgia Governor Brian Kemp’s recent signing of a “heartbeat bill,” which bans all abortions after six weeks gestation in the Peach State.

In case you didn’t know, six weeks gestation is right about the time when an unborn baby’s nose, mouth, ears, beating heart, and other distinctly human features begin to take shape and show up on an ultrasound, proving that he or she is a real human baby as opposed to a “clump of cells.”

AOC loves to showcase her stupidity concerning pretty much everything

Naturally, a slew of people with actual functioning grey matter were quick to challenge AOC’s patently false assertions about pregnancy and missed periods, explaining to the freshman congresswoman and certifiable lunatic the basics about what actually happens during pregnancy.

“Are people just unaware that changes happen in your body in the first 2-4 weeks of pregnancy?” responded The Daily Wire‘s Emily Zanotti, who’s currently pregnant with twins, to AOC’s idiocy. “I might be more experienced with this given my fertility treatments/history, but there’s a whole hormonal shift that happens.”

“It’s not just a random zygote just floating around in there,” Zanotti added. “A miscarriage at 6 weeks pregnant (four passed missed period) is pretty … horrifying and emotionally scarring. It ain’t just a late and extremely heavy menstrual cycle.”

Ben Shapiro, The Daily Wire‘s Editor-in-Chief, also responded to AOC’s fundamentally fictitious belief about this issue – which is just one among many – explaining that Georgia’s heartbeat bill really is “a ban on abortion after six weeks of pregnancy, just like it says it is” – challenging AOC’s contention that it’s a “backdoor bill,” which doesn’t even make any sense.

“The fact that this is early in pregnancy is the entire point of the bill,” Shapiro added. “The fact that a six-week-old embryo is apparently just a missed period to you,” he further stated, speaking directly to AOC, “is disturbing.”

Liz Wheeler from the One America News Network responded to AOC by tweeting out a picture of a developing child at six weeks gestation, which clearly shows a head, arms, legs, and other bodily features starting to develop.

Is AOC mentally challenged? It was mostly women who wrote and sponsored Georgia’s heartbeat bill

Others further challenged AOC’s false accusation that only “men” crafted Georgia’s heartbeat bill, pointing out that it was actually mostly women who wrote it.

“Here are the 5 main sponsors of the bill,” tweeted conservative columnist Jeryl Bier. “So here are the two men you slandered as ‘Most of the men writing these bills don’t know the first thing about a woman’s body outside of the things they want from it.’ And the other three are… WOMEN!” Bier added.

Thankfully, Gov. Kemp hasn’t backed down in defending unborn human life, despite this onslaught of feminist stupidity. He reiterated that the bill he signed represents “a declaration that all life has value, that all life matters, and that all life is worthy of protection.”

For more related news, be sure to check out Abortions.news.