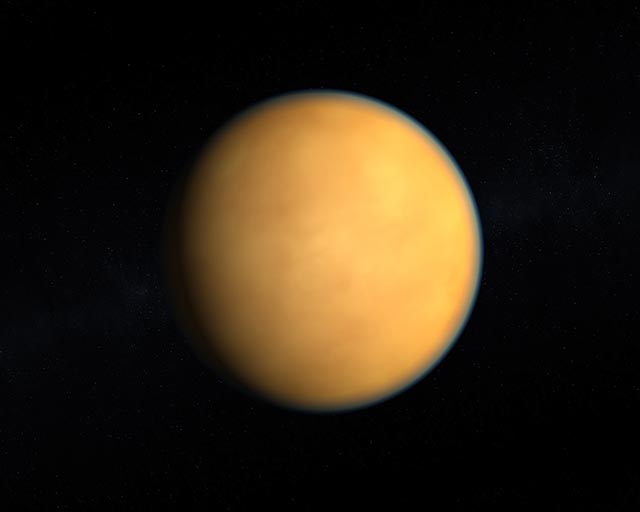 Titan is one of only two bodies in the Solar System that possess both a dense atmosphere and liquid seas on the surface. A new theory posited that the methane and nitrogen filling the skies of the satellite came from organic materials at the moon’s core that were undergoing heat and pressure.

“Titan is a very interesting moon because it has this very thick atmosphere, which makes it unique among moons in our solar system,” explained Southwest Research Institute (SWRI) researcher Kelly Miller. “It is also the only body in the solar system, other than Earth, that has large quantities of liquid on the surface.”

The lead author of the study, Miller took care to point out the considerable differences between Earth and Saturn’s largest moon. The seas on Titan were comprised of liquid hydrocarbon, rather than the water found in our home planet. These organic materials are also much more reactive than water, so Titan’s surface is believed to be chemically active.

Furthermore, Titan’s atmosphere is even denser than the one cladding Earth. And while nitrogen is found in large quantities in the skies of both celestial bodies, a much larger percentage of Titan’s air is made up of nitrogen. (Related: Cassini mission reveals another giant, mysterious vortex on Saturn’s northern pole.)

As of 2019, there are nearly 200 recognized moons in the Solar System. But only Titan displays a dense atmosphere. This led many researchers to wonder where all that gas came from in the first place, given its parent planet Saturn is mostly made up of hydrogen and helium.

“The main theory has been that ammonia ice from comets was converted, by impacts or photochemistry, into nitrogen to form Titan’s atmosphere,” Miller said. “While that may still be an important process, it neglects the effects of what we now know is a very substantial portion of comets: complex organic material.”

Adding to Titan’s mystery, the second most abundant gas in the atmosphere is methane. This highly reactive gas is known to quickly form organic matter that would get pulled down by gravity and settle on the surface of the planet.

Understandably, the concentration of atmospheric methane would deplete over time. If Titan did not have a natural means of replenishing the gas, it would lose all trace of methane in its skies at some point in the future.

Titan may have absorbed a comet filled with organic materials

Miller and her SWRI colleagues were inspired by the findings of the European Space Agency space probe Rosetta. The spacecraft was dispatched to investigate the comet 67P/Churyumov-Gerasimenko (67P).

67P used to be part of the much more distant Kuiper belt before Jupiter pulled it into its current orbit. When Rosetta scanned the comet, it found that 25 percent of 67P’s mass was made up of organic material.

Comets like 67P are considered survivors of the formation of the Solar System. These celestial bodies could end up colliding with bigger objects. If the smaller rock contained organic material, that stuff would end up in the core of the bigger moon or planet.

Miller theorized that Titan could have collided with a small body rich in organic materials. She calculated the amount of organic material inside a meteorite, then evaluated how much of those substances would be turned into gas by the heat and pressure of the satellite’s core.