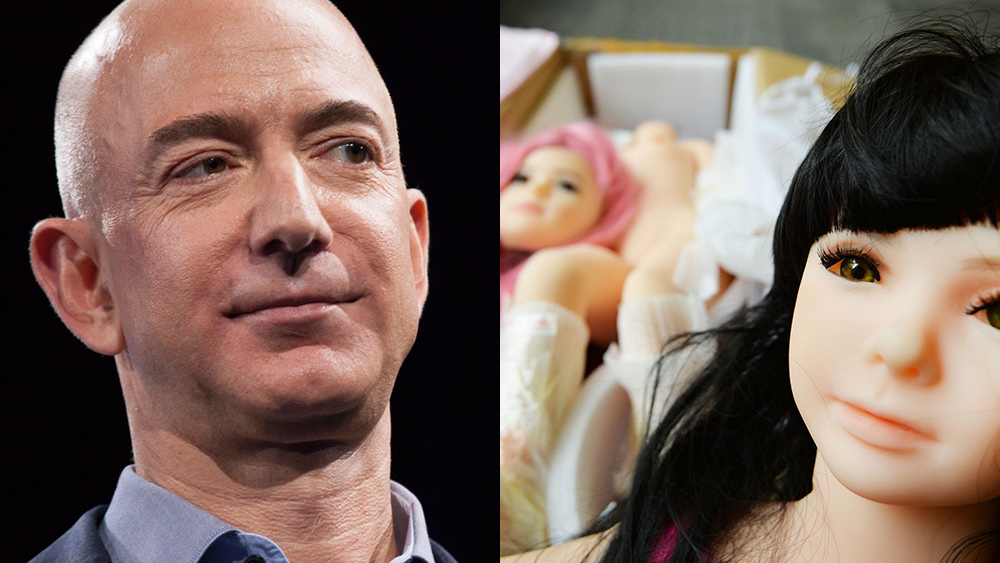 Jeff Bezos has been on a banning binge lately, pulling down books and documentaries about vaccines from Amazon that fail to meet the company’s “customer content quality expectations,” presumably because they conflict with the government’s official narrative on immunization. But Bezos sees nothing wrong with amazon selling child sex dolls to pedophiles, which are openly available for sale with “hidden delivery” to keep purchasers’ identities private.

These inflatable “love sex dolls” are littered all over Amazon’s page, in child sizes of four-feet, two-inches tall, clearly catering to mentally deranged Amazon customers and perverts who want to simulate having sex with real human children. But if you want to watch or purchase Vaxxed: From Cover-Up to Catastrophe on Amazon, that’s off limits because any material that questions the safety and effectiveness of vaccines is “dangerous to society,” according to Amazon.

The Free Thought Project was able to identify a host of child sex doll items for sale on Amazon, the implications of which violate every decency and morality ethic that remains in dying American society. But you’ll no longer find much in the way of independent science about vaccines on Amazon, as Beelzebezos kowtows to the demands of political tyrants like Adam Schiff, who actually wrote a letter to Bezos demanding that all material about vaccines be purged from Amazon’s website.

“If Amazon truly cared about ‘content quality’ on their site, removing Vaxxed while allowing child sex dolls to be sold on its platform for pedophiles, is not a good way of proving that point,” writes Matt Agorist for The Free Thought Project.

“It seems that Amazon is more concerned with caving to political pressure than they are about upholding freedom of speech and fostering an environment that doesn’t promote pedophilia. Thanks for nothing, Jeff Bezos.”

Satanism and pedophilia: the core values of Jeff Bezos and Amazon

Meanwhile, Amazon is also promoting and selling all sorts of Satanic content on its website, including “The Devil’s Bible, “The Happy Satanist: Finding Self-Empowerment,” and “Satanism: A Beginner’s Guide to the Religious Worship of Satan and Demons Volume I: Philosophy.”

Underage children can discover and buy books on Amazon that teach them how to accept Satan into their lives from the youngest age possible, and this is all perfect okay with Bezos – as is reportedly texting nude photos of himself to his latest fling of the week. But when it comes to any information that might cause a person to question vaccines, this is completely off-limits.

“As covered in my detailed video analysis of what’s next for Amazon, the tech giant will soon start remotely deleting vaccine Kindle books from Kindle devices, carrying out the Ministry of Truth agenda described in George Orwell’s dystopian novel 1984,” warns Mike Adams, the Health Ranger.

“It’s also obvious that Amazon will begin banning pro-Trump books from its retail operation and Kindle devices, declaring that Trump, much like ‘anti-vaccine’ knowledge, is ‘dangerous to society’ and must therefore be banished from existence through digital book burning.”

Lying is also one of Bezos’ and Amazon’s fortes, seeing as how the deadline for Amazon-owned Whole Foods Market to begin labeling genetically-modified organisms (GMOs) in its stores has now come and gone, with no indication whatsoever that this promise will ever be kept.

“This means Whole Foods will continue to sell unlabeled GMOs while fraudulently insinuating to customers that its stores sell no GMOs whatsoever.”

For more news about vaccines, technocrats, and lying corporations like Amazon and Whole Foods, read JeffBezosWatch.com.