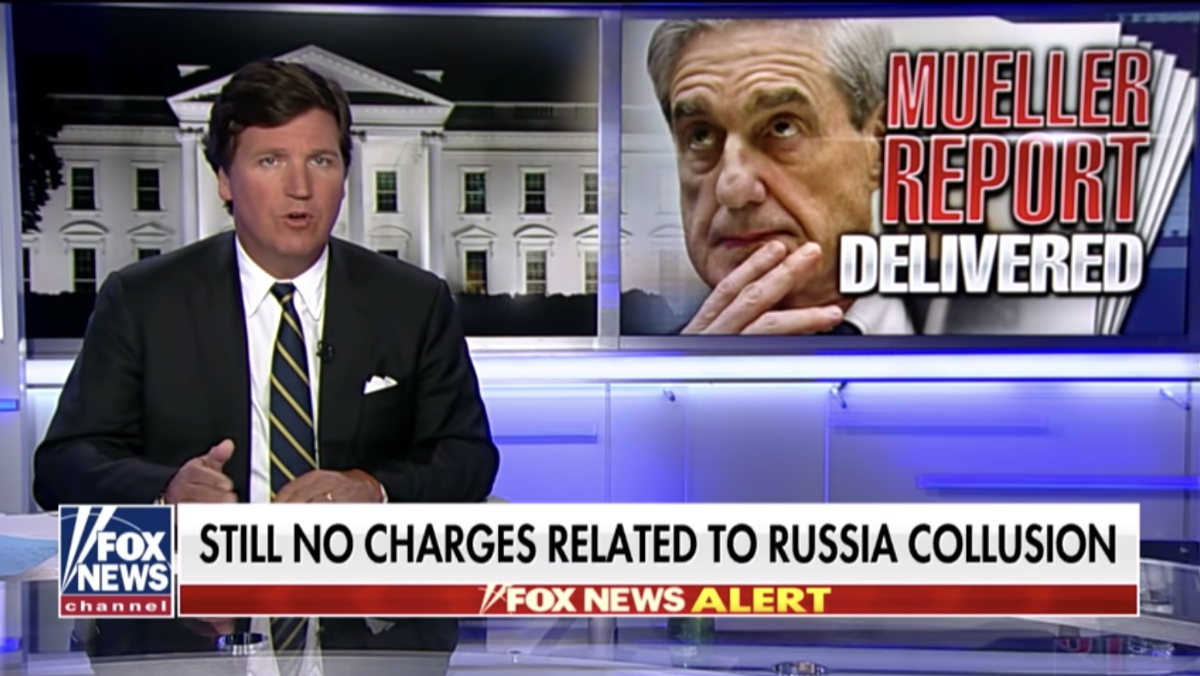 Well, that was a bust, but an expensive one — in real dollars and in terms of our country’s political health.

Special counsel Robert Mueller’s final report regarding his “witch hunt” probe of POTUS Donald Trump’s 2016 campaign over allegations of “collusion” with Russia to “steal the election” from Hillary Clinton has proven two things.

One, that the investigation was a hoax — based on a phony narrative devised in the aftermath of an election the far-Left Democratic Party and its sympathetic Deep State thought they had in the bag.

And two, the lame stream fake news “establishment” media has been lying all along, playing the role of enabler to this mother-of-all political scandals, while at the same time covering for the real criminals and traitors and keeping the country stirred up, divided, and people at each other’s throats. Literally.

During his Friday program, Fox News ace Tucker Carlson recounted for viewers a list of Democratic “shills” and media who made it their mission in life to keep feeding the Russian collusion monster for as long as possible, hoping that Mueller would find something, anything, that would not only justify his appointment but prove to be political cyanide for POTUS and his administration.

“The people on TV have been lying to you. They’ll deny it now and will tell you this was always about Trump’s taxes or some foreign real estate deal or hush money he paid to a girlfriend. That’s a crock,” Carlson noted, as reported by TownHall’s Beth Baumann. “This investigation was always, from day one, about collusion with Russia, about betraying this country. They told us that for years. And we have the tape.”

One of the biggest liars has been Obama’s CIA Director John Brennan, whom many believe was the mastermind behind the “Spygate” scandal. In a previous MSNBC appearance, he haughtily asserted he was pretty sure that some collusion took place.

“That was the former CIA Director, one of countless retired intel officials you see parading across your screen every night, all of them paid by MSNBC and or CNN to tote the party line, all of them no better. They’re lying. It’s a habit many of them picked up years ago,” said Tucker.

POTUS is right: They are enemies of the people

Carlson then showed a clip of Rep. Steve Cohen (D-Tenn.), who appeared on CNN in July, telling host Wolf Blitzer that he believed most of Trump’s family would also be indicted.

The media hyped that one too, as noted by The National Sentinel. Breathlessly, for weeks, in fact.

“That man [Steve Cohen] is a sitting member of Congress. He wears a necktie. He’s on TV. People believed him. And why wouldn’t they? He’s an authority figure in this country and he was lying,” Tucker said.

“There’s no element of the Russia conspiracy that Swalwell, who’s been on this show many times, isn’t eager to believe and magnify,” he added. (Related: REAL collusion: Democrat lawyers met with FBI to share notes on Russia allegations before FISA warrant was issued.)

The Fox News host reminded his viewers that there have actually been three separate investigations into the Russian collusion hoax — Mueller’s, of course, but also one each by the House and Senate intelligence committees.

Those committees “spent years looking into this and in the end, they found nothing, but during this time, the country they’re supposed to be running has become obviously and measurably worse,” said Tucker.

And the pathetic “mainstream” media has been front and center in the middle of perpetuating the hoax, through acts of commission and omission. Despite opportunities galore to call these liars out, the media instead chose to keep bringing them back, allowing them to spin, yarn, and fib, all while tensions in the country boiled and Americans seethed at each other.

Scandalous, for certain. But perhaps even criminal. In another time more Americans would have been far more willing to call this behavior what it was (and continues to be): Treasonous.

POTUS is right. They are enemies of the people.

Read more about the Robert Mueller probe and the Trump-Russia hoax at RobertMueller.news and Hoax.news.