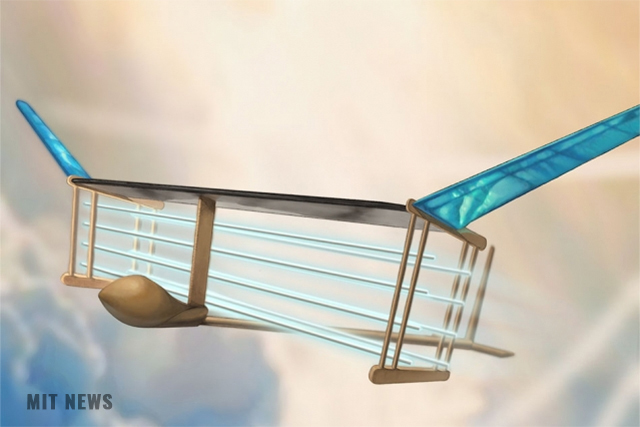 American researchers created the first “solid state” airplane that does not have a single moving part – including the ones that comprise an engine. Instead, the small prototype can produce ionic wind that will lift it up into the air for flight.

While lighter-than-air vehicles and gliders are capable of flying without an engine, powered aircraft requires a propulsion system to achieve free flight. A heavier-than-air vehicle requires at least one engine that can move air around to generate lift.

Usually, the engine is a combustion type and burns dirty fossil fuels. There are electric engines, but electric aircraft also require heavy batteries and have inferior performance.

In a news release, MIT researcher Stephen Barrett cited the shuttle pods in Star Trek as an inspiration for the engine-less aircraft. He began to investigate the best way of replicating the special effect in real life the moment he entered the university.

“In the long-term future, planes shouldn’t have propellers and turbines,” Barrett stated. “They should be more like the shuttles in ‘Star Trek,’ that have just a blue glow and silently glide.” (Related: First wireless insect-size robot takes flight.)

The MIT research team chose to use ionic wind as the means of propelling their experimental aircraft. A physics principle first discovered in the early 20th century, ionic wind had never been successfully implemented with regards to flight.

Sometimes, a large amount of negatively charged electrons could be generated. As the electrons filled the air, they transferred their charge onto the air molecules they came into contact with, in a process called ionization.

In turn, those charged molecules would also pass their negative charge onto other gas molecules that come close to them. Over time, the ionized air would flow away from the electron-generating source.

It is possible to guide this negatively charged air flow in a specific direction. Setting up a material that can draw the electrons toward it would get the ionic wind to flow toward the direction of the “collector.”

The ionic wind phenomenon was first described in the 1920s. Four decades later, researchers tested its potential to provide thrust to an object. In that 1960s attempt, they converted just one percent of the electricity into thrust.

Look, Wright brothers, a heavier-than-air powered aircraft with no engine

Barrett and his colleagues brought modern advantages to their take on the 1960s test. They designed the systems with the help of computers and built the prototype aircraft out of strong yet light materials that had not yet been invented 60 years ago.

In their initial attempts, the MIT researchers successfully converted 2.6 percent of the electricity into thrust in the form of ionic wind. While still inefficient, it was also more than twice as powerful as the earlier effort decades ago.

Next, the researchers calculated the weight and wingspan of an aircraft that could theoretically fly using the amount of thrust generated by their new ionic wind system. They spent the next few years building, testing, and refining the solid state aircraft.

Their current iteration is five meters wide, weighs five pounds, and bears a passing resemblance to the Wright Flyer, the first successful heavier-than-air powered aircraft. Propelled by ionic wind, the MIT-designed plane can achieve flights of up to 10 seconds, just two seconds shorter than Orville Wright’s first successful flight in 1903.

“This is the first-ever sustained flight of a plane with no moving parts in the propulsion system,” Barrett remarked in the press release. “This has potentially opened new and unexplored possibilities for aircraft which are quieter, mechanically simpler, and do not emit combustion emissions.”