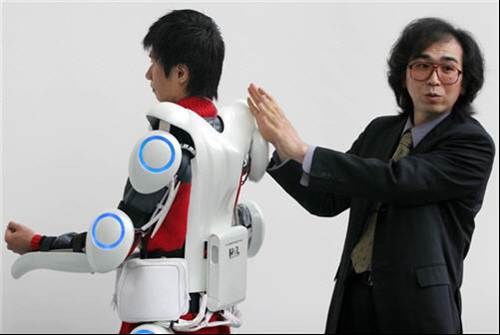 The latest wearable robotics from the Land of the Rising Sun is no Iron Man unit that transforms, flies, and shoots lasers. But a person wearing the Muscle Upper suit will find it very easy to pick up objects that weigh as much as 66 pounds (30 kilograms) and hold that prodigious load up for many minutes.

Developed by researchers from the Tokyo University of Science (TUS), the powered exoskeleton traces its ancestry to the Muscle Suit device of 2014. The latter is an unpowered load-bearing device that supports the back of its user whenever he or she is performing intense physical activity.

While it took some of the weight off the load on the back, the Muscle Suit did not directly increase the strength of the user. The new Muscle Upper improves on that ancestral system by providing pneumatically-powered assistance for both of the wearer’s  arms as well as the back.

The TUS researchers founded the Japanese startup company Innophys Co. to offer the Muscle Suit to the commercial market. Now, Innophys is debuting the successor exoskeleton for workers in elderly care, factories, farms, and other areas that require a lot of heavy lifting. (Related: Commercially available exoskeletons should be used with caution by workers doing heavy lifting.)

Japanese exoskeleton suit provides powered assistance to arms and back

The entire Muscle Upper system weighs under 18 pounds (eight kilograms). Like Muscle Suit, it is fitted onto the back of the user. Once it is up-and-running, the exoskeleton can help haul heavy loads up to the same level as the shoulders.

The artificial muscles of the wearable robotics are made from flexible rubber tubes. They are pneumatically-powered by an external compressor unit. When air forcibly flows through their length, the muscles will flex accordingly.

Muscle Upper was developed by Innophys based on feedback from workers in the industrial and distribution sectors who used the Muscle Suit. While the workers were pleased with the load-bearing device, they requested a new unit that could also support their arms alongside their back.

“The product is compact and could be used in various settings,” said Takashi Furukawa, the president of Innophys. “It leaves it up to human hands to do the work, while allowing the wearer to hold and lift all kinds of things.

The asking price for a Muscle Upper unit is $17,600. Despite the steep price tag, Innophys claimed that it is already filling out orders for their new device. Their biggest customer is a manufacturer of nursery care appliances.

Japan is relying on technology to make up for its graying population and shrinking pool of workers. Not only are they building robots to replace humans in the workplace, they are also designing robotic exoskeletons to enhance the strength of the remaining human employees.

Roughly one out of every four Japanese citizens is at least 65 years old. Thirteen percent of the total population is 75 or older. And these numbers are growing every year.

The Japanese healthcare industry is in dire need of personnel who are capable of considerable physical labor in addition to medical assistance. Workers in assisted living facilities will often have to support elderly people so that they can get into and out of beds, bathtubs, and wheelchairs. Many times, they will have to outright carry the patient.

Not everyone has the strength and endurance to handle these duties over and over again. That is one of the reasons behind the development of load-bearing devices like the Muscle Suit. By reducing the weight of a patient, the load on the wearer is reduced, allowing him or her to conserve strength and work longer.