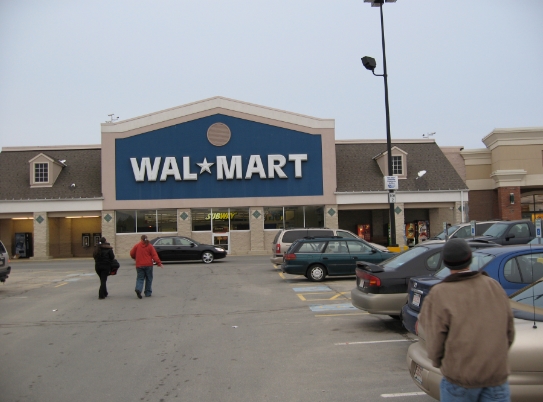 Retail giant Walmart has found an interesting, and not terribly surprising, response to the ongoing pressure to increase minimum wages by hiring a fleet of robots to sweep its floors and cut humans out of the equation entirely.

The company has just announced that it has enlisted a fleet of 360 “custodial” robots to autonomously clean its stores’ floors. Billed as a cross between motorized wheelchairs ice rink machines, the computer-vision robots were developed by Brain Corp. After being taught the stores’ layouts and best routes by humans, the robots will be off to sweep and scrub the floors on their own with the press of a button while customers shop around them. The robots are expected to be up and running in hundreds of Walmart stores by the end of January.

It’s also worth noting that sensors on the robots can collect and interpret data. While this is certainly useful when it comes to avoiding people and other obstacles, it will also be supplying the retailer with data about customers’ shopping habits. It’s a win-win for Walmart and a huge loss for workers and shoppers alike.

Some of these robots are already being used in American airports – namely those in San Diego, Miami, Seattle and Boston. The firm is also working on robots that function as security patrols and robots for delivering products inside stores like Walmart.

Walmart seems to be embracing the concept of automation. They’re already using it to track inventory and scan shelves for items that are out of stock, in addition to moving bigger products out of storage to fulfill online orders. Let’s not forget the automated checkout kiosks that have already taken the place of some human cashiers in stores.

All of this is happening against the backdrop of Walmart employees pressuring the company to raise the starting wage it offers its workers to $15 dollars per hour. Walmart recently announced that its minimum wage was increasing to $11 dollars an hour, in addition to expanding certain benefits.

Robots a no-brainer for many employers

It’s not surprising to see Walmart make such a move. From their perspective, the robots are more dependable employees. They’re unlikely to get sick or miss a shift and incapable of stealing or being unpleasant toward customers, other workers or management. They don’t need insurance or vacation, and they always show up on time. One thing they definitely won’t be doing is demanding higher pay.

Fast food chain Jack-in-the-Box is also looking into using automation to keep costs down; McDonald’s and Wendy’s have already announced plans to add kiosks to their stores for self-ordering. These companies can save costs not only on paying workers but also the hiring process, such as carrying out interviews and background checks and providing uniforms and training materials.

There’s no doubt that there is a huge gap between the incomes of top CEOs and the everyday workers buying the services and products of these companies. On one hand, it can be argued that people having more disposable income is good for the economy. However, when wages rise, it is often the case that businesses – especially those that are already operating on very thin profit margins – will have to get rid of some workers to stay afloat. Walmart is the nation’s biggest private employer at the moment with more than 1.5 million paid workers, so the stakes are enormous.

Given the many advantages that robots offer employers over human workers, it’s not surprising to see so many jobs involving repetitive tasks being handed over to machines – and those who need these jobs aren’t doing themselves any favors by insisting on being paid more.