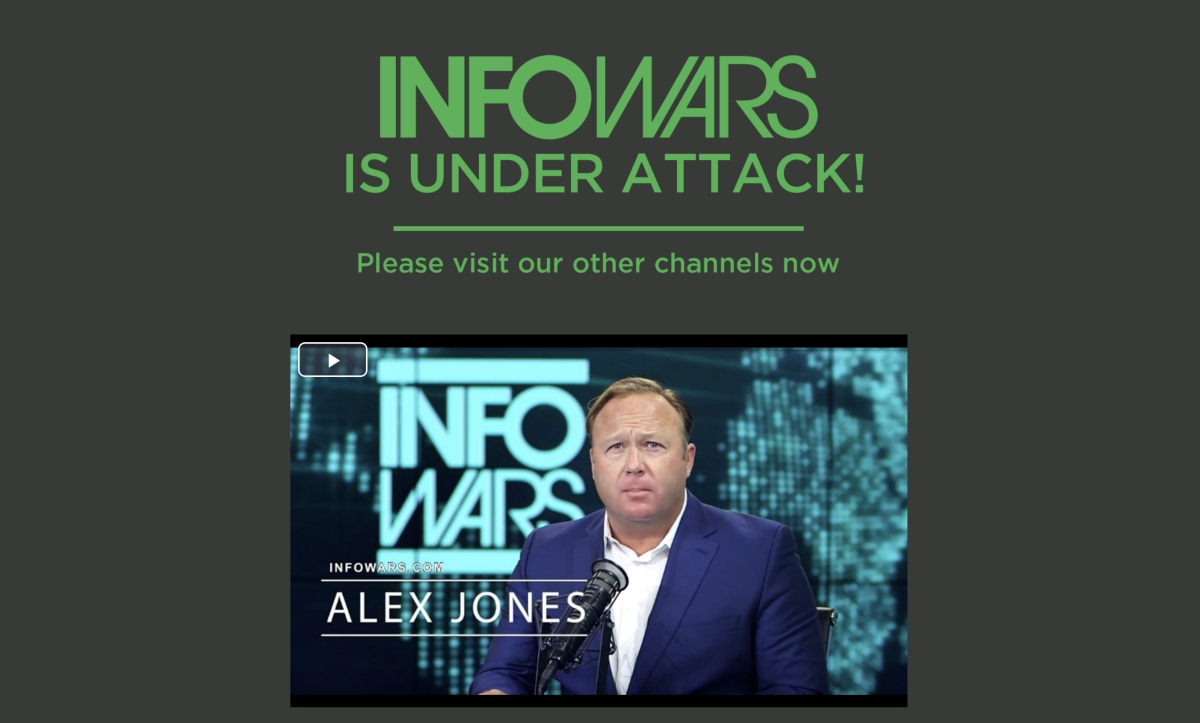 The censorship attack against talk show host Alex Jones continued Tuesday as what could be a DDOS (distributed denial of service) cyberattack was launched against his news site, Infowars.com.

For several hours all visitors to the site could see is a message, “Infowars is under attack! Please visit our other channels now,” as evidenced by the screenshot above.

“Infowars.com is down again. We have been under cyber attack for over a week since Big Tech launched its purge,” Paul Joseph Watson, editor-at-large of PrisonPlanet.com, an Infowars brand, tweeted.

https://t.co/DHRJw8KFgr is down again. We have been under cyber attack for over a week since Big Tech launched its purge.

Jones himself tweeted as well that his site was under cyberattack.

Then again, the fact that both of them can ‘still use’ Twitter is itself a minor miracle, given what’s happened to Jones and his organization over the past week.

Another popular alternative media site, FellowshipOfTheMinds.com, was also experiencing “difficulties” as it, too, was not online as of this writing.

According to Newswars, another Jones Web property, Infowars was taken down around 12:00 p.m. CST, when peak traffic reaches the site. Jones broadcasts his daily radio program from 11:00 a.m. – 3:00 p.m. CST.

“According to Infowars IT staff, one of multiple servers was inexplicably kicked offline,” Newswars reported.

“The Infowars websites’ unavailability follows Big Tech’s coordinated censorship campaign of Alex Jones, which has now risen to 20 platforms, including Spotify, Facebook, Vimeo, YouTube, IHeartRadio, and more,” the site reported, noting that for now Jones’ content is still being carried at Gab.ai, Twitter, Bitchute and Minds.com.

The Alt-Left-run social media behemoths including Google as well as e-commerce platforms like Criteo and Apple have all dumped Jones’ content and podcast libraries over the past week in what appears to be an orchestrated act of censorship – just as we enter the home stretch of the 2018 midterms.

Experts who have looked at what’s happening to Jones believe a classic ‘information’ and ‘political warfare’ operation has been launched against him. They include Samuel Culper, a former U.S. Army intelligence analyst.

Yesterday, four major tech companies de-platformed InfoWars within 12 hours, which is exemplary of the Left’s political warfare. (Background: here) Alex Jones and InfoWars undoubtedly played a role in the Trump revolt against the establishment, and Jones’s circulation is now gone from four major platforms conveniently three months ahead of the 2018 mid-terms. The flak is the thickest, as they say, when you’re over the target, and this was nothing short of a maneuver in political or information warfare.

But beyond just political maneuvering, it’s further indication of institutionalized action against the Right. This wasn’t a violation of terms of service; institutions — pillars, to varying degrees, of American culture: Facebook, Apple, Google, and Spotify — deliberately negated mainstream consumption of one of Trump’s and the Republicans’ culture warriors going into the mid-terms and, two years beyond that, the 2020 general election.

That is the only correct way to view what is happening to Jones – and, quite possibly, Fellowship of the Minds and other conservative-leaning, Trump-supporting media. The Left can’t win debates based on a competition of ideas offered by conservatives and the president, so they attempt to dominate and impose their ideas using authoritarian means like censorship and, in the case of Antifa, intimidation and brute force. (Related: What? So Facebook de-platforms Alex Jones but allows huge assortment of pro-terrorist filth across its platform.)

The attacks against Jones are not universally celebrated by the Left. Free speech icon Noam Chomsky – though he is not a fan of Jones’ content – has come out solidly in support of his right to broadcast and publish his own viewpoints.

The MIT professor emeritus and lifelong defender of the First Amendment said “I don’t think that the right way to deal with ‘hate speech’ and crazed fabrications is to ban them” bur rather “confront” them he said in an email obtained by Watson.