Would you like fries with that radiation? Even health food stores are not safe from cell towers 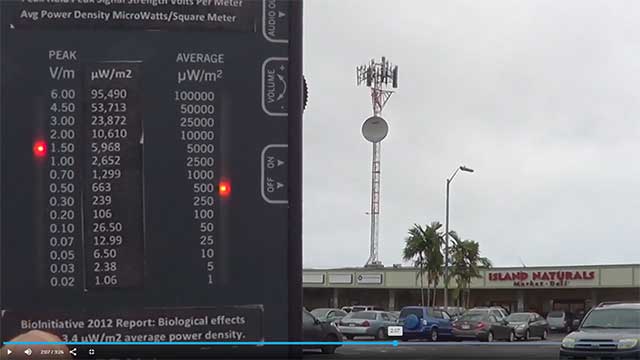 It’s pretty easy to protect yourself from dangers that you can see. Take sharp objects, for instance: If you’re handling a knife or any object that can injure a person, it’s only right that you take appropriate measures to avoid accidents from happening.

Protecting yourself from dangers that you can’t see, on the other hand, is a little trickier. For one, there are a lot of things people can’t see that can cause real danger – pathogenic microorganisms, particulate pollutants, and toxic chemicals. Fortunately, there is a comprehensive body of knowledge that identifies the risk factors for most of these unseen dangers, as well as individual treatment and preventive measures.

Of these “unseen” dangers, however, radio frequency (RF) radiation from mobile phones is, by far, the most controversial. A scientific review from the National Toxicology Program of the U.S. Department of Health and Human Services has concluded that there is “clear evidence” that RF radiation from mobile phones could lead to cancer – despite its lack of coverage in mainstream media outlets.

In his video, Neil from EMF Safety Zone captured a scene from what he called the “weird wireless world.” In a shopping district in Hawaii – where holistic health stores are located – on top of a health food store sits a cellular tower which emits an average power density of 1,000 μW/m2 of RF radiation and has a peak signal strength of 1.5 V/m when measured from the ground.

“People are working in this area, all to the sides and underneath the cellphone tower,” Neil said.

Neil interviewed a worker from the health food store about it. When asked about the presence of the cellphone tower, the worker replied, “We try not to think about it.”

“That’s a great strategy,” he quipped in the video. “It sounds a lot like denial.”

He also acknowledges that this setup happens in many places and not just in Hawaii.

“All the more reason to be awake – and aware – of where you live, and where you work.”

Protecting your body from harmful radiation

Despite soothsayer claims that there is no definitive proof that mobile radiation is harmful, it doesn’t mean that it’s safe either. As we function in this “weird wireless world,” here are some steps to minimize RF radiation and maintain your health and well-being.

The feature is part of EMF Safety Zone’s video on the dangers of RF exposure, which can be viewed on this link.