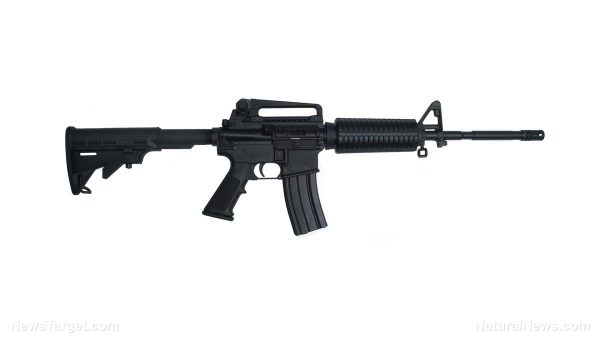 Whenever you hear a Marxist Democrat use the phrase “common sense gun control,” don’t ever believe it means anything other than, “We want to confiscate your guns.”

Leftist Democrats hate the Second Amendment (and the First Amendment when gun-owning Americans use their right free speech and expression to defend the Second Amendment). Part of their agenda is to get guns out of the hands of all ordinary Americans, leaving only police, federal agents, and the military armed (and dangerous).

They don’t want compromise. They don’t want fewer guns in our hands. They want all the guns, period, because Democrats are authoritarians by nature and you can’t “rule” over people with an iron fist while they’re still armed.

This reality came glaringly to the forefront again recently when a Democratic candidate for governor of Florida, Gwen Graham, announced via Twitter if she wins in November, she’s going to use the power of her pen to ban all semi-automatic military look-alike guns like AR-15s by executive order.

How’s that for “common sense gun control?” How’s that for thwarting the will of Floridians, a majority of which may have supported pro-gun, pro-Second Amendment representatives?

“After twenty years of total NRA control of Tallahassee, I am so proud of the Stoneman Douglas students and their ability to get something done. As governor, I will sign executive orders to ban the sale of assault weapons and implement universal background checks. #FLFreedomForum,” Graham wrote. (Related: What would you do? Increasing your odds of surviving a mass shooting.)

After twenty years of total NRA control of Tallahassee, I am so proud of the Stoneman Douglas students and their ability to get something done. As governor, I will sign exectuive orders to ban the sale of assault weapons and implement universal background checks. #FLFreedomForum

This is typical agitprop. The NRA — National Rifle Association — is the anti-gun whipping boy of the Left. The NRA hasn’t killed anyone. The NRA has taught more responsible gun ownership than any Democrat who criticizes the organization.

And apparently, Democrats don’t believe the NRA has a lawful right to lobby lawmakers — only corporations and organizations that support Marxism have that right.

Gun bans are the objective for Democrats

This wasn’t the first time Graham made anti-gun pledges. In February, following the shootings at the Marjory Stoneman Douglas High School in Parkland, she said, “After the largest mass shooting in modern American history, Rick Scott sat on his hands. After 13 school shootings, Rick Scott looked the other way. After the massacre of children, Rick Scott won’t even say the words common sense gun safety laws. If Rick Scott and Republicans in Tallahassee won’t even confront the problem we face, how can we expect it to ever stop? Rick Scott’s legacy will forever be covered in blood.”

Never mind that everyone from school officials to the Broward County Sheriff’s Department to the armed deputy resource officer to the FBI failed to act to stop Nikolas Cruz — even though he stated, clearly, on social media, “I want to be a professional school shooter.”

No. To Democrats like Graham, it’s the gun’s fault. Or it’s the NRA. Or Republicans — and darn them for defending a constitutional right.

As we’ve said before, this is why you can’t trust the Left or give them an inch on this issue. They will take as many miles as they can until they can get as close to what they really want: gun bans, confiscation, and the repeal of the Second Amendment.

On a legal note, it isn’t likely that Graham — should she win in November — will realize her dream of bans and confiscation. Florida law is clear on the issue of firearms ownership, and she has no legal authority to ban any class of weapon that is legally for sale. So any executive order would be challenged, successfully, in court.

But the fact that she even wants to do this is further evidence that Democrats don’t care about your safety or your gun rights.