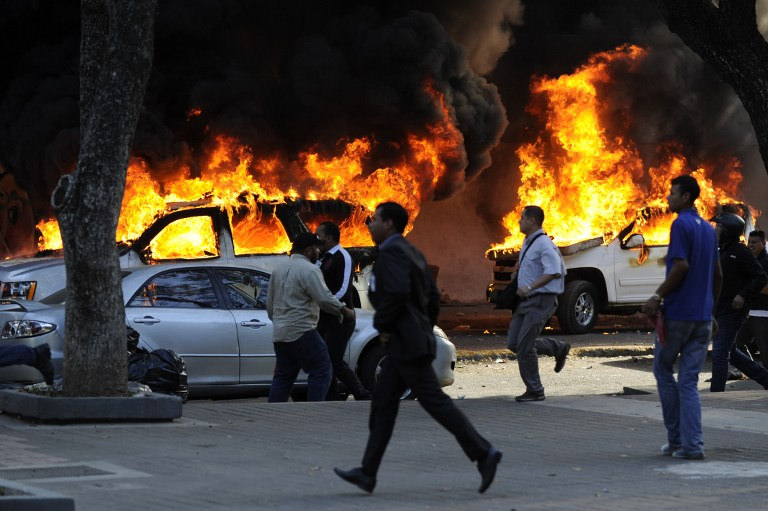 The Trump administration’s dedication to enforcing every letter of each immigration law — especially those having to do with people crossing illegally into the United States — is driving the Left’s biggest lunatics even crazier.

Those who are coming under the most fire are the men and women in the trenches: Immigration and Customs Enforcement (ICE) agents and Border Patrol officers working the front lines of the Trump administration’s war on border lawlessness.

In the past, it’s been a little entertaining watching the Left meltdown day after day over all of Trump’s policies. But things are getting way out of hand now.

As reported by The Gateway Pundit, the official Occupy Wall Street account, that Leftist/Marxist group of kooks, tweeted out a disgusting ‘graphic’ instructing migrant mothers to kill ICE agents.

The graphic, which tells mothers to cut open the chest of ICE agents and “pull out his still beating heart,” then says to “hold his bloody heart out for all other agents to see, and tell them that the same fate awaits them if they f**k with your child again.” 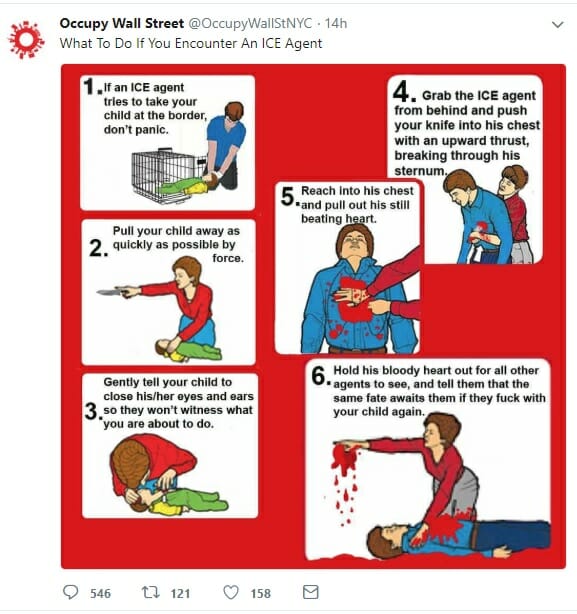 No doubt the punk who made the graphic — anonymously, of course — is a much braver keyboard warrior than an actual warrior, but the problem is this graphic went out to more than 207,000 Occupy Wall Street followers, many of whom, most likely, aren’t fake bots.

Understand this is the same kind of dog whistle Leftist Marxists all over the world send to their weak-minded, perpetually triggered followers to do their “revolutionary” dirty work for them. Anyone with the slightest bit of an IQ realizes that attempting to take the life of an ICE agent is essentially an act of suicide.

Violence is coming unless something is done

But the larger point is this: The Left lives, breaths, and advocates violence against anyone who disagrees with their warped, intolerant, authoritarian view of things. In the past that might have seemed innocuous but in the age of Obama and Trump, political polarization has never been greater — and the threats, real and implied, to federal officials, elected and otherwise, has never been greater.

During the 2016 campaign, Trump supporters were routinely targeted and attacked by Leftist groups that sprang up to #Resist him such as Antifa, which became so violent the organization was deemed a domestic terror threat by the FBI and Dept. of Homeland Security.

Things have only gotten worse since then. (Related: The radical Left is not simply a political movement, it is a malignant form of aberrant mental illness that must be pruned from society if we are to survive.)

It was just barely a year ago when Republican House Majority Whip Steve Scalise of Louisiana was shot and nearly killed by a maniac Leftist supporter of Sen. Bernie Sanders’ 2016 presidential bid as GOP lawmakers practiced for their annual softball game with Democrats.

“As we were standing here this morning, a gunman walked up to the fence line and just began to shoot. I was standing at home plate and he was in the third base line,” Rep. Mike Bishop, R-Mich., said. “He had a rifle that was clearly meant for the job of taking people out, multiple casualties, and he had several rounds and magazines that he kept unloading and reloading.”

The gunman, James T. Hodgkinson, asked before he began firing if Republicans or Democrats were on the field.

And just this month The National Sentinel reported that Left-wing violence has become a “new normal” for GOP lawmakers:

It’s all been driven by hate. And now the hate is driving a record number of threats against most Republicans in Congress — so much so that many members are taking extraordinary steps to protect themselves.

Members are buying body armor, hiring extra security, and some are believed to be retiring from Congress because the threats are getting out of hand.

We need arrests for these kinds of threats. They won’t stop until people who make them learn they will pay with their freedom.