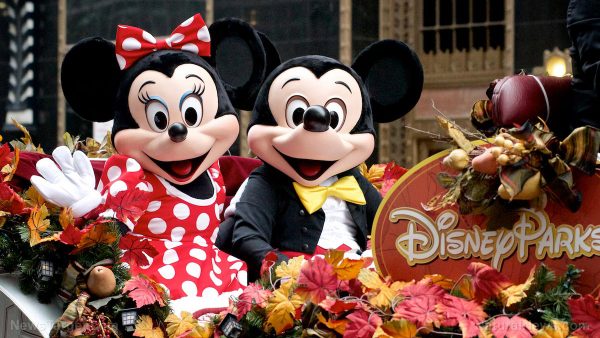 Doing its part to help expedite America’s precipitous downward spiral into absolute depravity, the Walt Disney company has reportedly introduced a brand new line of rainbow-colored Mickey Mouse “Pride Ears” at its Disneyland and Disney World theme parks that openly celebrates homosexuality, transgenderism, and the many other “colors” of the gender and sexuality spectrum.

According to The Daily Wire, visitors at the two parks will now be able to show their support for sexual degeneracy and moral bankruptcy simply by purchasing a pair of the hyper-pigmented ears for around $18 a pop, which they can then parade around the park for all families and children to see.

The latest “in your face” show of political force by the LGBT mafia, these so-called “Mickey Mouse Rainbow Love” ears feature embroidered Mickey Mouse gloves in the shape of a heart, colored in with the iconic stripes of LGBT “pride.” In case this isn’t “loud” enough, the ears also feature top-to-bottom rainbow stripes in a vivid gradient from red to purple.

Though the Walt Disney company didn’t make an official announcement about the new product line, many visitors to the park have been posting pictures of the Pride Ears on social media. One individual in support of the move captioned her photo of the Pride Ears with “#FABULOUSmouse” – the word fabulous, just like the rainbow, representing another cultural element hijacked by the LGBT mafia.

Many liberals are already gushing with praise in response to this decision by the Walt Disney company, including Curtis M. Wong over at The Huffington Post. Wong wrote that the release of these new “Disney souvenirs” is “a dream come true for many.”

Why are LGBTers maniacally obsessed with having to publicly advertise their sexuality all the time?

Catering to the LGBT crowd is technically nothing new for the Walt Disney company, which has been unofficially holding so-called “Gay Days” at its parks for many years. There are also circulating rumors about alleged debauchery and abuse that secretly takes place inside Disneyland’s private, members-only “Club 33,” located in the New Orleans Square section of the park.

The Mickey Mouse Pride Ears, however, represent the first time that Disney has openly “come out” in support of the LGBT agenda, subjecting its youngest visitors to prominent displays of LGBT “pride.” And for those who assume that Walt Disney himself would be outraged by this latest policy change were he alive today, evidence exists to suggest otherwise.

According to some news reports, Disney was a member of a youth organization started by Freemasons with powerful influence in the entertainment industry. Many speculate that his particular role was to indoctrinate the youth of the world using things like cartoon characters and theme parks.

The Mickey Mouse character itself is also directly associated with what’s known as Monarch mind control and brainwashing. Many members of the so-called Mickey Mouse Club, including famous celebrities like Britney Spears and Justin Timberlake, started out entertaining children while they themselves were still children, only to later “graduate” into more adult-themed entertainment.

And then there are all the Disney movies, many of which have been exposed for containing hidden agendas and sexual imagery, all of which is presumably present in these films to corrupt the young, impressionable minds that view such content during their developmental years.

In light of all this, Disney’s latest pandering to the LGBT crowd isn’t really all that out of place. It’s perhaps more overt than ever before, but maybe that was the goal all along – to capture the minds of the youth in order to officially normalize all LGBT perversions on a societal level.