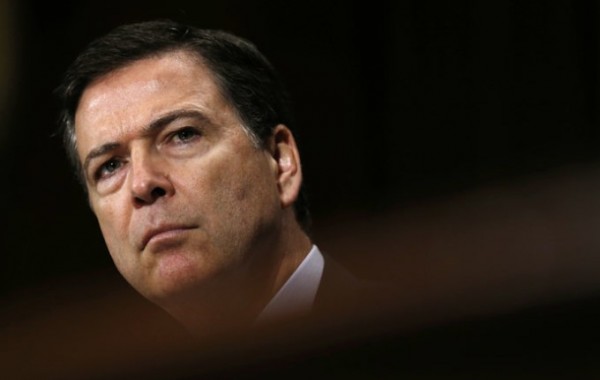 Fired FBI Director James Comey took some more heat from his former boss on Saturday as President Donald J. Trump accused him of lying in parts of interaction memos that were released to Republican lawmakers— then leaked to the media — last week.

“James Comey’s Memos are Classified, I did not Declassify them. They belong to our Government! Therefore, he broke the law! Additionally, he totally made up many of the things he said I said, and he is already a proven liar and leaker. Where are Memos on Clinton, Lynch & others?” the president said in a Saturday afternoon tweet, as reported by the Washington Examiner.

James Comey’s Memos are Classified, I did not Declassify them. They belong to our Government! Therefore, he broke the law! Additionally, he totally made up many of the things he said I said, and he is already a proven liar and leaker. Where are Memos on Clinton, Lynch & others?

The Department of Justice released Comey’s memos, which included redactions, in response to a threat from the House Judiciary Committee chairman Bob Goodlatte, R-Va., that he would subpoena DoJ officials for them if they weren’t turned over. He was joined by House Government Oversight and Reform chair Rep. Trey Gowdy, R-S.C., and House Intelligence Committee chair Rep. Devin Nunes, R-Calif.

Comey was fired by Trump in May 2017. He allegedly detailed all of his face-to-face conversations with the president in memos that the president — and others — claim belong to the government, not to him personally, because they involved government functions and the law on that is clear.

In one conversation, Comey wrote Trump pressed him for a pledge to loyalty, and in another, Trump asked Comey to go easy on former White House national security adviser Mike Flynn, who has since pleaded guilty to lying to FBI investigators.

As for Comey, he’s not out of hot water yet. The Department of Justice Office of Inspector General is probing classified issues regarding two memos fired FBI Director James Comey gave to a friend outside of government, The Wall Street Journal reported Friday. (Related: POTUS Trump laments: Michael Flynn’s life ‘destroyed’ while ‘leaker Comey’ profits from book.)

The memos contained information that government officials now considered classified, according to sources familiar with the matter, the paper reported.

Comey gave a total of four memos to his friend Daniel Richman, a former federal prosecutor who is now a professor at Columbia University School of Law. Three of them were considered unclassified at the time and one was classified.

The former FBI director testified to Congress after his firing that his hope in leaking the memos was to spark a special counsel probe of Trump’s 2016 presidential campaign over alleged “collusion” with Russia, an allegation that the House Intelligence Committee has said there is no evidence.

Of those two memos, Mr. Comey himself redacted elements of one that he knew to be classified to protect secrets before he handed the documents over to his friend. He determined at the time that another memo contained no classified information, but after he left the Federal Bureau of Investigation, bureau officials upgraded it to “confidential,” the lowest level of classification.

Mr. Comey has said he considered the memos personal rather than government documents. He has told Congress that he wrote them and authorized their release to the media “as a private citizen.”

While Comey says he considered his memos private and his property, they’re not. The FBI’s own rules — which he is intimately familiar with — state clearly that all records created during official duties are considered government property (and why does a Russian news service know this but American “news” agencies don’t?).

The FBI’s employment rules that all agents are required to sign say that “all information acquired by me in connection with my official duties with the FBI and all official material to which I have access remain the property of the United States of America.”

They also state agents “will not reveal, by any means, any information or material from or related to FBI files or any other information acquired by virtue of my official employment to any unauthorized recipient without prior official written authorization by the FBI.”

See more of this reporting at JamesComey.news.

There will be TWO post-collapse WAVES of American refugees fleeing the cities
16:34