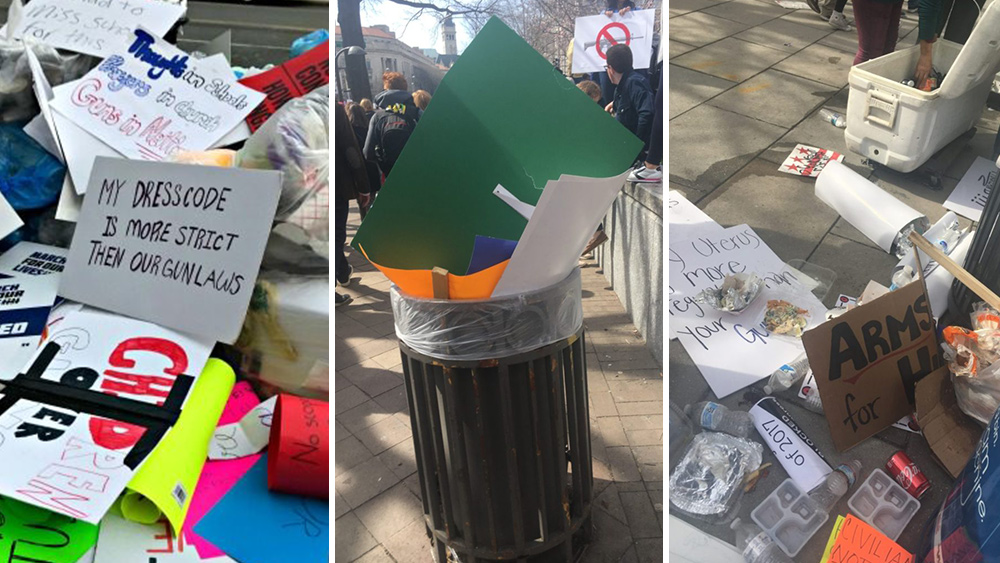 Left-leaning Americans like to lecture everyone about how environmentally aware they are, but sometimes other things are more important than clean and green.

As you may have heard, tens of thousands of people showed up in Washington, D.C., on Saturday to demand that something is done about firearms — not the people who misuse them for deadly purposes.

In the wake of those protests, demonstrators left mountains of trash and garbage — signs, water bottles, food containers, and various other things — behind for local trash collectors paid for local taxpayers to clean up.

“Thousands of protestors at March for Our Lives in Washington, D.C., Saturday packed the streets holding signs promoting an anti-gun agenda, but many of them left those signs out in the cold after the march,” Breitbart News documented in a report the following day accompanied by lots of photos.

“The signs that the self-described socially conscious protestors held up high during the march, along with countless other items of trash, were littered on the streets of D.C. like old rags,” the site noted further.

Indeed, the accompanying photos showed mountains of trash piled up by city workers after the protestors had all gone home. Many of the protest signs were hand-made, but scores of others were obviously pre-printed and came from any number of Democratic National Committee-aligned groups.

“Cardboard signs bearing messages such as “My dress code is stricter than your gun laws,” and signs demanding that no money be sent to the pro-gun National Rifle Association were tossed aside like yesterday’s news,” Breitbart reported.

In addition to tossing their signs on the ground, many ‘environmentalist’ protestors also discarded food and beverages, along with food containers.

But by a long shot, this wasn’t the first time the ‘environmentally conscious’ Left created havoc — and a massive mess — during protests. (Related: Exposed: Anti-gun teachers, along with Pravda media, exploiting students of Parkland, Florida shooting.)

In January 2017, the post-Trump inauguration Women’s March was marred by mountains of trash as well. “Photo from Breitbart’s Raheem Kassam below. These folks aren’t the ‘picking up after yourselves’ types like the Tea Party members who famously left the Mall in DC cleaner than they found it in 2010 during the Restoring Honor Rally,” the site noted in a separate report filed on Inauguration Day.

In a video posted to YouTube, the late, great conservative media guru Andrew Breitbart, in a speech to Tea Party supporters, compliments the crowd for “picking up after yourselves” following the demonstration. Yes, that’s right: Conservative Tea Party demonstrators left the grounds as clean or cleaner following their event.

There are other examples of Leftists trashing their environs during protests. About 400,000 global warming hoaxers descended on New York City in September 2013 “not to celebrate the wonderful news that the planet hasn’t warmed in 18 years,” Breitbart noted in a third report, but rather to become “litterbugs.”

“You would think that the one thing environmental fanatics and those of us who are not fascists could agree on is that only arrogant scumbags are litterbugs. Unfortunately, as the pictures below show (gathered mostly by Twitchy), we can’t even enjoy some common ground on that one point. Climate fanatics are indeed arrogant litterbugs,” the site noted.

Similar trashing of the land also took place during protests against the Keystone and Dakota Access pipeline projects.

It’s hard being a true believer in the agenda of the American Marxist Left, isn’t it? It’s so difficult to know which of your core principles is more important on a given day and which ones you have to lay aside for, you know, the ‘greater good.’

Because you can’t be a Leftie protestor and environmentally conscientious at the same time. That’s just asking too much.