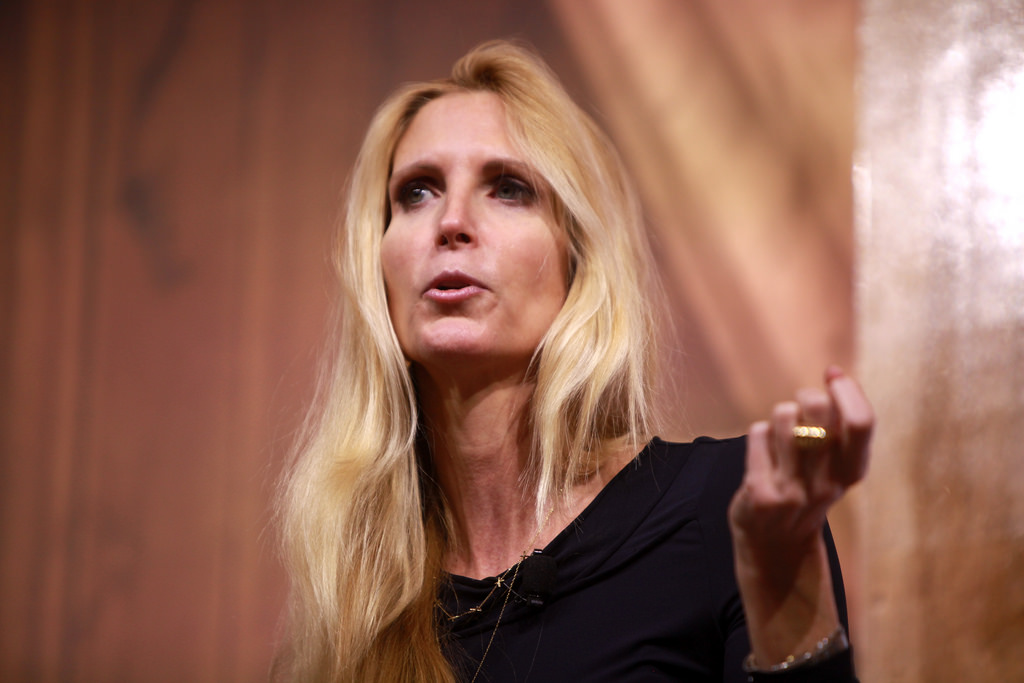 Barely a week goes by anymore without the emergence of some new liberal “cause” for which brain dead leftists are prompted to take to the streets with protest signs and plenty of anger, which they claim represents some kind of mass “resistance.” But according to conservative pundit and author Ann Coulter, it’s all just a bunch of manufactured “rebellion” that’s actually being dispensed by corporate America.

During a recent segment that aired on “Tucker Carlson Tonight,” Coulter lambasted the left for pretending to be so anti-status quo whenever its members “take a stand” for gay rights or blather things like “Love Trumps Hate,” believing that these cliched actions and words hold some kind of counter-culture value.

Every new iteration of “resistance,” she says, represents little more than the parroting of whatever new “outrage” issue the leftist corporate media spoon-feeds the public. And people who fall for this manufactured hype, believing it to actually represent “sticking it to the man” by voicing independent thought, are completely delusional and out of touch with reality.

Such people, Coulter says, are completely blind to the fact that they take most of their cues directly from globalist corporations openly pushing their own agendas. Coulter finds this humorous, especially in light of the fact that liberals often accuse conservatives of being this way, and she wants the world to know the hilarious truth that’s staring them right in the face.

“These are these new radicals we have, The Resistance, they’ll check with corporate America you know Apple and Twitter, Facebook and their professors to ask if they can wear a ‘question authority’ t-shirt,” says Coulter.

Watch for yourself as Coulter puts liberals in their place on “Tucker Carlson Tonight”:

One prominent example of this is the extreme push for LGBT acceptance. They love to pretend they’re martyrs in this overwhelming fight for recognition. With major corporations like Coca-Cola, McDonald’s, and VISA all onboard with pushing the LGBT agenda – rainbow-colored products and all – it’s hard to see how these fake victims could possibly be so disenfranchised, as they constantly claim.

“One of the most precious of liberal fantasies is that they’re brave cultural mavericks fighting a guerrilla war against the staid, puritanical values of ‘The Man,'” commented one Twitter user in response to another tweet about how LGBT people have it so hard because of the presence of Mike Pence, a traditional family values guy, in the White House.

Left-leaning college students are another parodic example of the consequences of faux leftist outrage, as many of them, despite “listening to white privilege all day, every moment of every day,” end up “emerging from college barking at the moon right-wingers,” Coulter says.

And why wouldn’t they, considering most leftists rhetoric these days is so outlandish that no sane person would ever take any of it seriously. Perhaps that’s why most U.S. college students these days have been brainwashed into supporting “feelings” over rights, as things like free speech threaten the stranglehold they have over information.

Protecting “diversity and inclusivity,” it turns out, is a far more important priority to college millennials than allowing others the right to confront them with potentially conflicting ideas. Liberals often don’t have a rational argument to stand on, and thus have to bully their opposition into silence in order to maintain control over the narrative.

Read LeftCult.com for daily coverage of the Left’s crybully tactics.