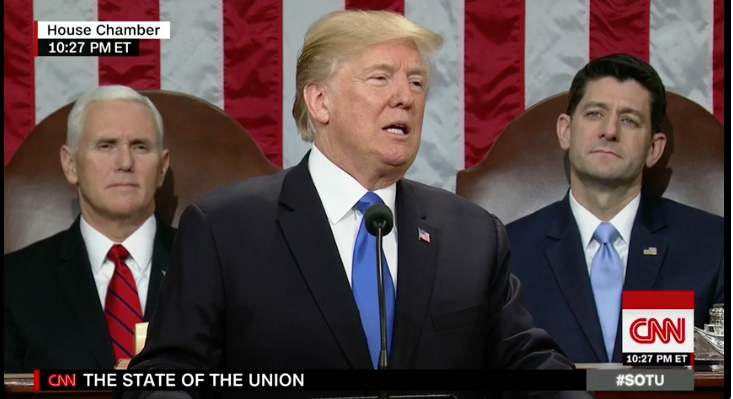 If you watched President Donald J. Trump give his first State of the Union Address Tuesday, you learned everything you need to know about the legitimate anti-American sentiment expressed by members of today’s Democratic Party.

On numerous occasions, television cameras caught Democrats openly booing, frowning, or expressing resentment and anger at various points during Trump’s speech. And in nearly every instance, they expressed disdain at the president’s attempts to strike what should have been a unifying tone…that is, if you love your own country.

Oh, they loved ‘Merica when Barack Obama was president — and implementing every policy he could to circumvent the law, tear down our institutions, insult our traditional mores and values, help our enemies, and radically “transform America” into a country our founders would never recognize (and, as it happens, fought to leave). You could say Obama was the first anti-American president.

But now that we have a president who is unapologetically “America first,” Democrats were seen getting visibly angry every time Trump praised our country, our people, our governing system, and our traditional values:

— At one point during his speech, Trump said he and Congress must “summon the unity we need to deliver” good government and promises to the American people. What’s wrong with “unity?” Obama demanded it; why can’t Trump? Ask House Minority Leader Nancy Pelosi; when Trump made the plea, she frowned.

“Tonight, I call on all of us to set aside our differences, to seek out common ground, and to summon the unity we need to deliver for the people,” he continued. “This is really the key. These are the people we are elected to serve.”

However, as Grabien News reported, “As every lawmaker int [sic] the chamber then rose to applaud the call for unity, Pelosi appeared to be the only one still sitting, visibly annoyed.”

— Trump mentioned that during his first year, his economic policies have led to an explosion in job growth — so much so that black unemployment is at a historic low. That should animate the Congressional Black Caucus…right? Wrong. Not a single one of them even applauded; they sat on their rear ends stone-faced, looking as if they’d rather be sick and sitting in a dingy, dirty roadside restroom than hearing good news about their core constituents.

Reaction shot to Trump’s line about African-American unemployment being down pic.twitter.com/MkxAokFPKN

— At one point during Trump’s speech, chants of “U-S-A! U-S-A!” broke out. That so offended Left-wing amnesty champion Rep. Luis Gutierrez he got up and left the chamber.

We have a bipartisan standing ovation — and a lot of "USA!" chants. https://t.co/00Kmhu7ges

The hatred of America also extends to the Alt-Left commentariat in the “mainstream” media, many of whom claimed to be “triggered” or “offended” or “insulted” by just about ever ‘America first’ reference Trump made. (Related: President Trump targets Big Pharma price monopolies, opioid addiction in riveting State of the Union speech.)

“Trump trying to call on all the tropes of 1950s-era nationalism. The goal of this speech appears to be to force the normalization of Trump on terms of the bygone era his supporters are nostalgic for,” she actually tweeted.

Let’s hope her kind of hatred and intolerance doesn’t become ‘normalized,’ though in the Democratic Party, it already is.

— Not to be outdone with outrage, ABC News anchors and hosts also demonstrated their hatred of America via meltdowns, labeling Trump’s optimism and calls for unity as “divisive,” “gloomy,” and “sad.” Per Newsbusters:

George Stephanopoulos started by telling chief White House correspondent Jonathan Karl that Trump “did not unify that chamber” while Karl swooned that he’s “never seen anything like it” with “Democrats…basically run[ning] for the exits.”

That’s right; we haven’t seen classlessness like that before, and certainly not throughout the eight years Barack Obama gave State of the Union addresses. As for unity, well, who wants to ‘unify’ with a bunch self-triggered, whiny, America-hating Leftists?

In case you haven’t figured it out, Democrats are who divide America and Americans, not Trump, not conservatives, and not anyone else who believes in, and is loyal to, their own country. Follow more news on the radical intolerance of the Left at Intolerance.news.