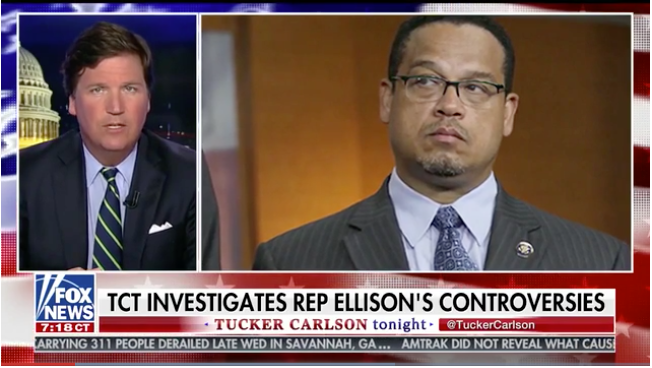 In another day and time, Rep. Keith Ellison would never have been elected to Congress. In fact, the Minnesota Democrat very likely would have found himself the subject of an FBI investigation and, in short order an inhabitant of a federal jail cell, for advocating the things he advocates.

Like domestic terrorists and domestic terrorism. In another day and time, the Justice Department and a vast majority of Americans would have correctly described Ellison’s advocacy as treasonous.

In recent days this darling of “progressives” (which is just another name for Marxists) and deputy chairperson of the Democratic Party, took a selfie while holding a book he claims will “strike fear into the heart” of President Donald J. Trump.

The book? “ANTIFA: The Anti-Fascist Handbook,” by Mark Bray. It seeks to not only defend but normalize the violence committed by members of the Alt-Left organization.

At @MoonPalaceBooks and I just found the book that strike fear in the heart of @realDonaldTrump pic.twitter.com/r81nYoeqpL

“At @MoonPalaceBooks and I just found the book that strike [sic] fear in the heart of @realDonaldTrump,” Ellison wrote.

Frankly, that sounds like a threat, given that “Antifa” has been designated a domestic terrorist organization by the New Jersey Department of Homeland Security. In fact, the federal Department of Homeland Security and the FBI designated the group’s violent actions directed at Trump supporters throughout the 2016 election as akin to domestic terrorism.

What makes them particularly offensive is that they pretend like Trump supporters and conservatives, in general, are fascist bigots, racists, and homophobes, so their violence against them is justified. How’s that for a built-in excuse for being, well, a terrorist?

And isn’t that the same logic that actual terrorists use? Why yes…yes it is. (Related: CHAOS ALERT: Dem leader calls for deploying UN troops on the streets of America.)

What’s more, the threat is real, as The Gateway Pundit reports: “From rioting and causing over $500,000 in property damage to the area surrounding University of California at Berkeley to prevent Milo Yiannopoulos from speaking to bashing a stranger over the head with a bike lock for the crime of supporting our president, members of Antifa have become increasingly willing to use violence for political aims since the election.”

As for Bray, he’s spreading his ‘revolutionary message’ to American youth, via pop culture. In an interview with Teen Vogue in October, Bray said, “Antifa grows out of a larger revolutionary politics that aspires toward creating a better world.”

Creating a better world? How? By inventing boogymen and then violently suppressing them?

Bray is allegedly a historian, so he should know that very tactic has been used before, during the 20th century, to deadly effect.

Adolph Hitler turned the Jews into ‘boogymen’ then used the made-up ‘threat’ to murder six million of them.

Soviet Premier Josef Stalin created all kinds of boogymen he claimed were out to topple his regime; he killed 20 million of his own people.

In all, Soviet communism, which idiots like Bray and Ellison idolize, killed upwards of 62 million people, 55 million of which were citizens.

Bray also went on to defend the violence, arson, looting, and generalized chaos and destruction members of the domestic terror group have caused as they attacked Trump supporters last year and have attempted to shut down all Right-leaning, conservative speakers on college campuses, mainly.

Bray said, “these kinds of events often serve as points of recruitment for far-right groups and help to embolden and mobilize students and community members who carry out their violence later on.”

How anyone like Bray can say something like that with a straight face is beyond me; using and justifying violence to shut down political speech and debate is the very definition of a fascist/Nazi movement.